Product returns remain a headache for many e-commerce companies. Some have gotten creative in how they approach it — for example, Amazon formed relationships with Kohl’s and Stein Mart for in-person returns, while PayPal acquired returns provider Happy Returns. 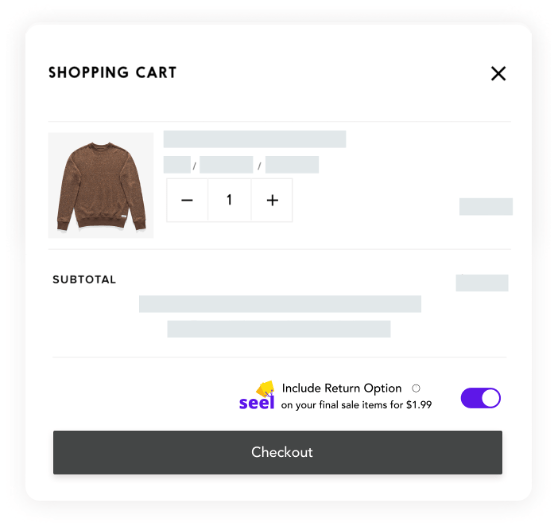 Aiming to give merchants more control over this, Seel, which focuses on underwriting e-commerce returns, is leveraging artificial intelligence to build proprietary underwriting software that uses hundreds of signals to predict the probability of return as soon as an order is placed, co-founder Zack Peng told TechCrunch via email.

After an order is sold, merchants can add “return assurance” to that order and transfer the liability of return to Seel. If the order is returned in the next 30 days, Seel, instead of the merchant, will pay for the refunds, he said. Shoppers themselves can add the assurance for a small fee at checkout to make items, like ones the merchant isn’t offering the service, returnable.

“Merchants typically won’t know their true revenue until the return window expires six to eight weeks after an order is sold,” he said. “That means they often have to reconcile refunds, correct financials and adjust marketing plans for orders sold weeks ago. Instead, they can pay a variable return assurance fee when an order is sold, and instantly lock in the net revenue and streamline a significant amount of revenue operations.”

US e-commerce on track for its first $1 trillion year by 2022, due to lasting pandemic impacts

With the U.S. e-commerce market poised to be a $1 trillion industry by the end of this year, Peng says between 10% and 30% of merchandise is returned, with merchants continuing to take on the financial risk of managing the logistics.

He believes with an industry growing that big Seel could one day underwrite over $100 billion in returns and refunds annually.

The company has been around for two years, and while its private beta started five months ago, Peng said Seel has close to 200 merchants using its software, ranging from boutiques to marketplaces. It is also seeing 20% of shoppers adding the assurance to their orders, which translates to a 5% conversion lift for merchants, he added.

“Seel sits at the intersection between fintech and e-commerce, and both markets are growing rapidly with strong secular trends,” Peng said. “With Lightspeed being an early and committed investor in Affirm and Justin (Overdorff)’s background from Stripe, the round was a perfect fit. Seel wants to build a strong fintech brand in underwriting the way that Stripe is in payments and Affirm is in credit.”

The new capital will be used to grow the team, strengthen the product and build out its go-to-market strategy. Seel has raised $24 million to date, he added.

Peng said the company grew from five to 25 employees in 2021, and is on track to double that in the coming quarters.

While the company is focused on e-commerce, Peng envisions creating a new category of risk underwriting for everyday consumer activities, for example shopping, working and playing online.

“We believe high-frequency, low-severity risks will become the next big category in underwriting, and Seel is the leader in building toward that future,” he added.