The way that recent generations of consumers treat(!) their dogs is vastly different than those who have come before. It’s gotten to the point that it’s memeable.

There are a handful of new pet veterinary services out there, such as Bond Vet and Small Door, and pet food companies have gotten into the mix in a real way, including Farmer’s Dog and Spot & Tango to name a few.

Fable, on the other hand, is thinking about the accessories a pup parent needs to stay sane in an urban environment, including collars, leashes, crates and toys. The company just raised $9 million in Series A, led by 14W, with participation from Female Founders Fund and Slow Ventures. And that fresh cash shows that its plan to build dog accessories that work together as an ecosystem is a smart one.

The New York-based startup is riding the waves of both pandemic-fueled puppy purchasing and the trend in how millennials take care of their pets. Like, you know, living, breathing companions.

But rather than focus solely on the pets themselves, Fable also makes a conscious effort to think of the pet parent, as well.

Fables products are all designed to make caring for a pet easier and more aesthetically pleasing, to boot.

The company launched with a collar and a leash, and then evolved to a new kind of hands-free leash called the Magic Link. Anyone who has tried to multitask getting coffee and walking the dog at the same time can quickly realize the value in a hands-free leash. Fable then expanded to other use cases around caring for a dog, including a crate that can double as a side table by the bed, a dog bowl, a poop bag dispenser (that is durable enough to not need replacing after a few months) and, importantly, toys.

In fact, Fable’s best selling product is a game aptly called The Game. I have one for my puppy that has been an actual godsend.

The Game has a weighted bottom and a silicon frame wherein you can put up to a cup of kibble or treats. Inside, there is a sliding mechanism that lets you set the difficulty for your dog. From there, the pup activates both their play and their prey drive and can stay occupied for quite some time.

I’ve had other treat-dispensing toys for my puppy, including puzzles and balls, that are either too easy for him (earns me five minutes) or are cheap and super loud. The Game seems to solve for those two problems.

Fable also released a toy called the Falcon, which dispenses treats through a small slot that the puppy has to squeeze to make open. Falcon is good on its own, but you can chain together multiple Falcons to create different, more difficult games for your little gal or guy.

All of these products are designed to look good in a small space, with matching earth and jewel-tone coloring.

This is where the real genius of Fable lies.

One product leads to another. Once you’ve purchased the essentials — a collar and leash — it makes sense to buy a matching toy or poop bag dispenser from a now-trusted brand. If your dog loves The Game, why not buy the Falcon? Why not buy two? And if you have a Falcon, did you know it can hang down on the inside of the Crate so your dog can stay busy and stimulated in there? And while you’re at it, why not get a matching bowl?

But Fable isn’t resting there. The company is thinking not only of new use cases to add into the portfolio, but ways to enhance existing products. For example, sibling founders Jeremy Canade and Sophie Bakalar described plans to sell an add-on to the Crate. (Right now, it has no drawer or compartment for storing human stuff.) 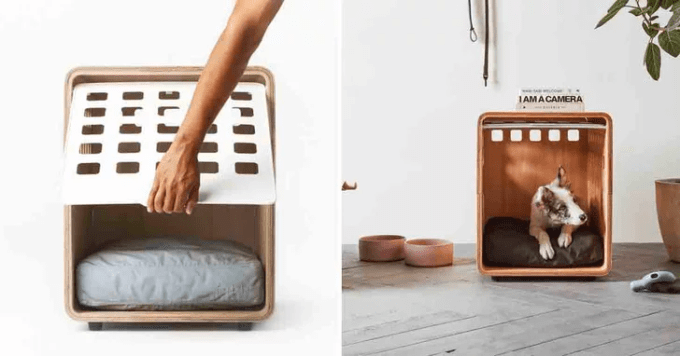 Canade also hinted at a different insert for The Game that would change the difficulty of the toy for the dog.

Planned obsolescence isn’t part of the strategy here, but rather, what else can the company offer to enhance existing products while releasing new ones?

The startup has had quite a bit of success using this strategy.

In 2021, there have been more than 20,000 people on the waitlist for the Crate, and Fable sold a unit of The Game every five to 10 minutes over the holidays.

Overall, the business grew approximately 3x year over year, according to the team.

It doesn’t hurt, either, that people naturally love sharing content around their dogs. The organic marketing around products like the Magic Link and The Game has helped spread the word tremendously, according to Canade and Bakalar.

Fable’s price point leans more toward the premium end of the Spectrum. The Crate stands out specifically at $395 — you can pick up a crate on Amazon or PetCo for $40. But Bakalar explained that the pricing depends on how you benchmark the products themselves. The Crate, for example, is also a bedside table, so when comparing it to prices at West Elm or Restoration Hardware, it’s much more in line.

“Those [competing] products are designed to be thrown away in the short term,” said Canade. “We’re trying to actually rethink the products from scratch and make things that are both for the animal and the human. They’re meant to live in both those worlds simultaneously. Nobody is doing that. Everybody is either designing only for the human, with a quality grade that is not meant to stand up to the wear and tear of a dog, or only for a dog, without considering the human use case.”