Instagram is benefiting from TikTok’s ban in India, and has now reclaimed the top spot in terms of total global downloads as of the fourth quarter of 2021. According to new data published by app intelligence firm Sensor Tower, Instagram just had its best quarter since at least 2014, with app installs up 10% over Q3. The Meta-owned photo and video sharing app was also the first Meta app to take the No. 1 position on the top downloads chart since WhatsApp held that spot back in Q4 2019.

In fact, Q4 2021 was only the second time in the past two years that TikTok wasn’t the No. 1 app by worldwide downloads, the firm says.

The only other time TikTok dropped from its top position during that time was at the beginning of the COVID-19 pandemic, when Zoom beat TikTok to become the No. 1 app by downloads in Q2 2020. 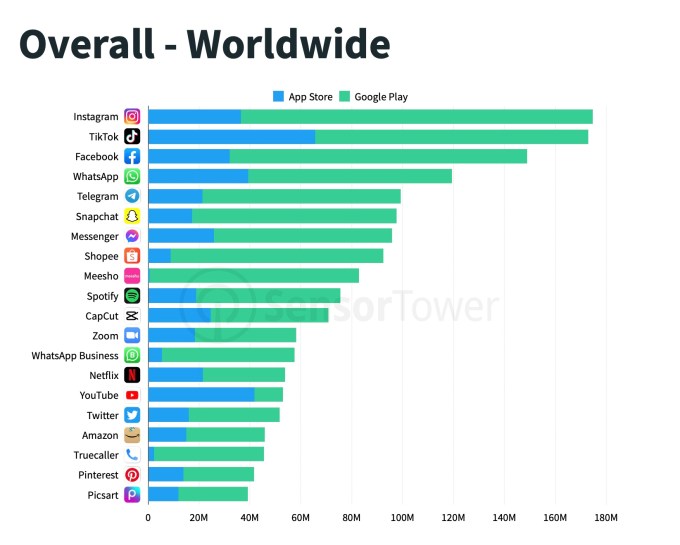 Instagram’s move to the top of the global (non-game) app market comes from an increase in installs from Android users, specifically. For the second quarter in a row, Meta-owned apps claimed both the No. 1 and No. 2 spots on the chart of the top Google Play apps by worldwide downloads. Instagram was No. 1 in the quarter, followed by Facebook. TikTok, meanwhile, was No. 3. 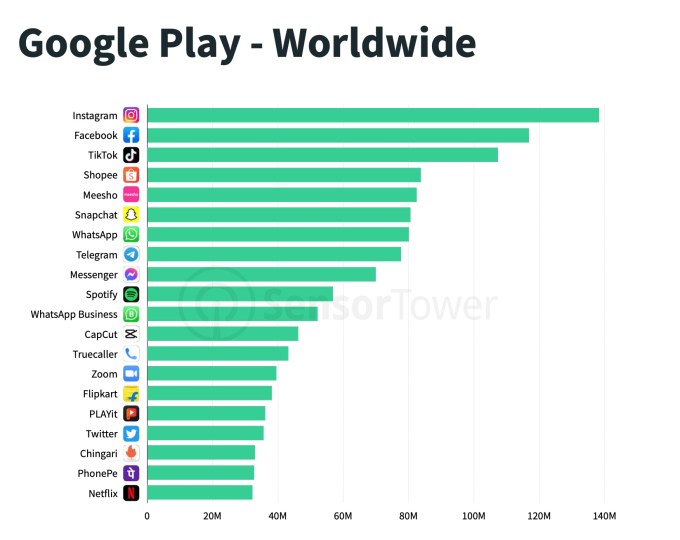 On the chart showing the most downloaded apps on the Apple App Store, things look a lot different.

Here, TikTok and YouTube continue to hold the No. 1 and No. 2 positions, respectively — spots they’ve held since Q2 2020. In Q4, TikTok surpassed 50 million App Store installs for the eighth straight quarter in a row, Sensor Tower says.

The rest of the top five was rounded out by Meta’s apps with WhatsApp (No. 3), Instagram (No. 4) and Facebook (No. 5). Meanwhile, an unusual appearance by China’s National Anti-Fraud Center app took the No. 6 spot, after being promoted by in a state-sponsored campaign. The rest of the list is filled out with the typical selection of social, chat and entertainment apps. 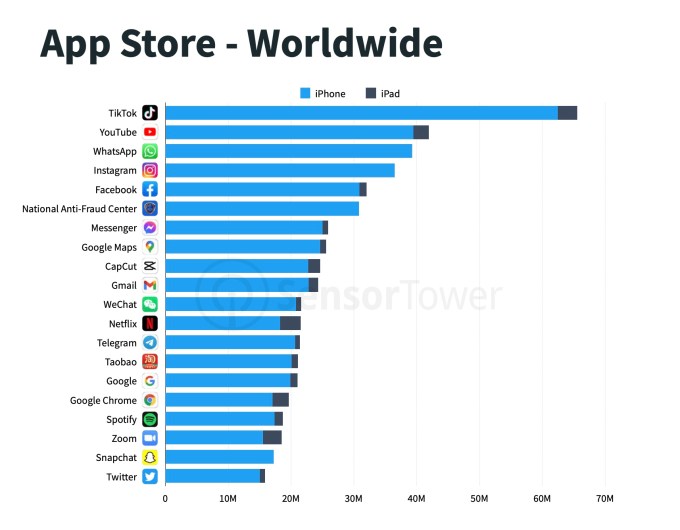 As an interesting side note, the quarter also saw Twitter reaching the top 20 most downloaded apps on the App Store for the first time since Q1 2020, and the fourth time since the start of 2020 when adoption jumped 34% quarter-over-quarter — growth that has mostly continued since. (Perhaps the flurry of product development activity is finally starting to pay off?

While TikTok is the No. 1 app by downloads in both the App Store and Google Play in the U.S., its fall from No. 1 globally can be at least partially attributed to India’s decision to ban the app in the country back in June 2020, along with others from Chinese firms, over “national security” concerns.

Sensor Tower told TechCrunch that, since the ban, Instagram has seen a steady increase in the share of its global downloads coming from India. 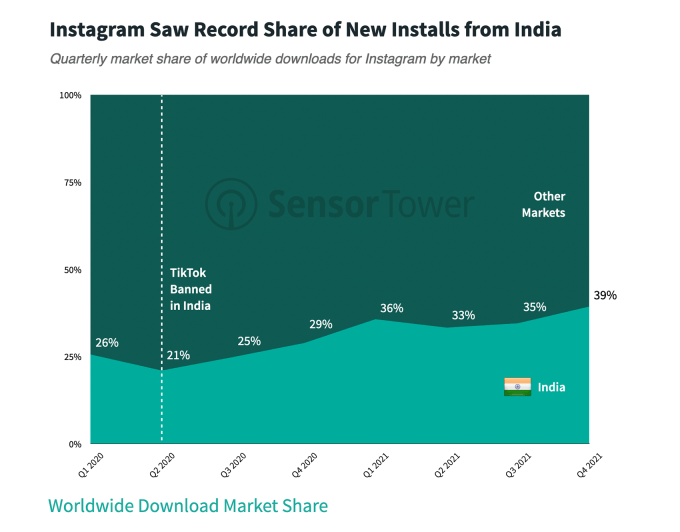 Instagram has been working to address the TikTok threat by shifting its app’s focus to video and promoting its TikTok clone, known as Reels. The company in 2021 began offering huge bonuses to creators posting on Reels — some payouts were as high as $10,000 — in an effort to regain traction in the face of the growing competition.

Though Instagram won the recent quarter, Sensor Tower data indicates TikTok was still the top app by global downloads for the full year (2021) across both app stores, followed by Facebook then Instagram.

For what it’s worth, rival firm App Annie shows a slightly different set of rankings. It also has TikTok at the top by worldwide downloads, but sees it followed by Instagram then Facebook. The takeaway here is that Facebook and Instagram were likely close in terms of downloads, and the two companies’ different methodologies for download estimates saw them ending up with different figures as a result.