In the latest bit of regulatory woe for Big Tech in Europe, Google is trying to settle a German antitrust investigation into its news licensing product by offering not to expand the display of News Showcase “story panels” into general search results.

The German Federal Cartel Office (FCO) announced today that the company has proposed several measures in response to its antitrust concerns — which also include taking steps to put clear blue water between News Showcase contracts and ongoing negotiations with publishers related to copyright licensing obligations around so called neighbouring rights for news.

Under EU and German law Google must pay copyright fees to news publishers for displaying snippets of their content — following a 2019 EU copyright reform which was transposed into German law in May 2021.

Unilateral attempts by German lawmakers — around a decade ago — to force Google to pay licensing fees to local publishers for displaying snippets of their content in Google News were easily thwarted by the tech giant switching to an opt-in model for the aggregator in the market.

Ultimately it’s taken a pan-EU directive — combined with local antitrust intervention — to force Google’s hand on this issue so it can’t simply change how it operates to circumvent payments.

Although the tech giant’s compliance with EU copyright law remains a work in progress, to put it mildly. (Its activity in the region on this front has already attracted a fine of over half a billion dollars in France, for instance, where Google’s approach to news licensing also remains under close regulatory watch.)

Germany is also scrutinizing Google’s negotiations with local news publishers — as well as, as of today, extracting operational concessions from it on how it operates News Showcase.

The FCO said it’s concerned that if Google integrates News Showcase into general search results, as Google has previously said it intends to, it will result in the company self-preferencing its own services or “impeding services offered by competing third parties”.

It also has focus on whether the News Showcase contractual terms “unreasonably disadvantage” the participating publishers — including by making it “disproportionately difficult for them to enforce their general ancillary copyright when participating in Google News Showcase”.

The regulator also said it is reviewing Google’s conditions for access to Google’s News Showcase service — to examine whether non-discriminatory access is ensured for publishers.

It’s likely no accident that just last week the FCO confirmed its ability to apply special measures to Google’s business, under powers to tackle digital market giants which were passed by local lawmakers at the start of last year. That shrinks the time frame for regulatory action and squeezes how much room Google has to try to wiggle around any FCO orders.

Similar Big Tech-focused copyright reforms are underway in the U.K., too. While ex ante rules for gatekeeping giants are well on their way to being adopted at an EU level (aka, the Digital Markets Act). So the operational leash for Big Tech in Europe is only set to shorten.

Germany’s antitrust probe of Google products steps up a gear

As well as offering not to expand the showcasing of licensed content to general search results in Germany, the FCO said today that Google has “already changed some of the practices under examination and declared its willingness to address any remaining ambiguities and concerns by modifying the Showcase contracts and providing clarifying statements”.

“In particular, Showcase contracts are to be clearly separated from the ongoing negotiations regarding other ancillary copyright payments between Google and the publishers or their collecting societies,” it added.

The tech giant announced the global News Showcase product back in October 2020 — when it said it would pay participating publishers $1 billion collectively to licence their news content to appear in so-called “story panels” (see below examples from Google’s product marketing) across Google products. 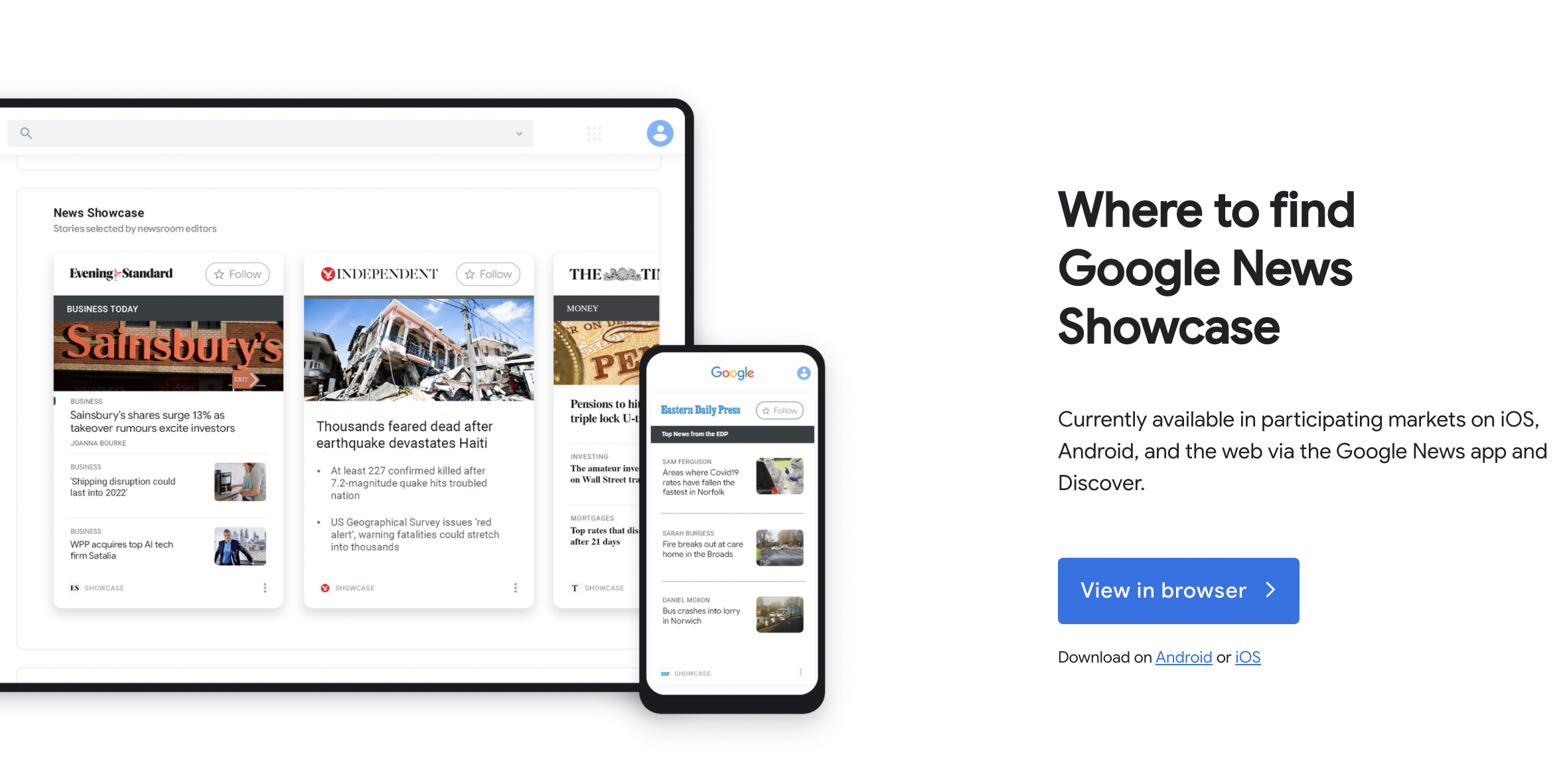 At the time Google was facing rising legal requirements in a number of jurisdictions over remuneration for displaying news content (Australia came up with its own legislative template targeting Google and Facebook to pay for news reuse in August 2020, for example).

So the News Showcase gambit always looked like a naked attempt by Google to limit a looming revenue hit while simultaneously leveraging its market power to generate as much upside for its ad-monetizing internet content business as possible.

Closed-door commercial deals for News Showcase offered Google the chance to dangle a carrot of licensing payments and play publishers off against each other — pressuring them to agree to its terms and shrink legally mandated licensing fees.

Initially, Google said content licensed under News Showcase would appear in story panels on the Google News app on mobile devices. It went on to expand where participating publishers’ content appeared to include its News aggregator product on the desktop and a personalized content feed on mobile devices, called Google Discover.

Evidently, it hoped to be able to further expand where across its online real-estate the licensed content appears — including by adding News Showcase into search results.

However, in Europe, where Google’s search engine remains dominant, its plan quickly landed it in regulatory hot water over competition concerns.

As its name suggests, the News Showcase product provides the prospect of raised visibility for participating publishers by featuring their content to Google users across a number of touchpoints — including giving mobile users the ability to follow publishers so that more of their content gets threaded into personalized feeds. So there is a strong incentive for publishers to cut deals with Google — giving it leverage over content licensing negotiations.

For example, publishers may feel incentivized to cut deals with Google for News Showcase in order not to miss out on the prospect of extra traffic being sent their way (especially if competitors have already cut deals) — putting commercial pressure on them to agree to broad licensing terms that might waive or reduce copyright-based licensing fees.

The problem for Google is that European competition regulators have not been taken in by its attempt to use a proprietary news display product and commercial terms to smudge copyright compliance by co-mingling News Showcase negotiations and contacts with legally required licensing fees — and have instead listened to publisher complaints that Google is not playing fair. (The FCO probe, for example, was opened following a complaint filed by the collecting society Corint Media.)

Issuing a hefty sanction last summer, the French competition watchdog said Google had sought to unilaterally impose its global news licensing product in negotiations with publishers — pushing for the legal neighbouring right to be incorporated as “an ancillary component with no separate financial valuation”.

Its investigation continues — but has already landed Google with a $592 million fine for breaching an earlier order.

Germany hasn’t issued any sanctions yet, but with the FCO flush with new powers to tackle abusive digital giants, the threat is clearly there. Hence Google’s alacritous offer of tweaks to how it operates the News Showcase product in Germany (the FCO only began probing the T&Cs last summer).

Google’s dominance in Europe in the market for general search means the company has faced a number of antirust enforcements in recent years — both at an EU and national level. But it’s fair to say that EU Member States’ competition watchdogs have been quickest to respond to news publishers’ concerns.

Germany was one of the first markets to get News Showcase which has likely fed the FCO’s relatively quick scrutiny of the product. Although France was faster to transpose the EU copyright reform into national law — and its competition watchdog has been keenly focused on Google’s compliance with the neighbouring right requirement, and with the detail of how it has negotiated fees with news publishers over reuse of their content.

In December, the French regulator announced Google had made a series of commitments around negotiating in good faith — which it proposed should apply for a period of five years.

France’s watchdog is consulting on Google’s proposal until the end of this month — after which it will make a decision whether to accept them or require additional measures.

In a statement, Bundeskartellamt president Andreas Mundt said: “Google has proposed measures to respond to our competition concerns relating to Google News Showcase. The company no longer plans to include Showcase content in the general search results. The conditions for participating in Google News Showcase are not intended to prevent publishers from enforcing their general ancillary copyright. Access to Google News Showcase is based on objective criteria. We rely on the assessment of the market players affected to ensure that the measures proposed by Google are effective. In view of the wide variety of interests the publishers may have we are thus conducting broader consultations in the sector.”

He further noted that the regulator is keeping a close eye on how Google negotiates with publishers over copyright fees, adding: “Parallel to the Google News Showcase proceeding we are closely monitoring the negotiations on ancillary copyright fees.”

In yet another recent regulatory intervention triggered by publisher (and adtech) complaints, Google’s plan to deprecate support for third-party tracking cookies and move to a suite of new ad targeting technologies (aka Privacy Sandbox) is under close supervision of the U.K.’s competition watchdog — and that process has also led Google to propose a series of commitments in order to be allowed to proceed.

Separately last summer, France’s competition watchdog hit Google with a $268 million fine for self preferencing its adtech — leading to yet another behavioral offer from the tech giant, in that case a set of interoperability commitments.

Update: A Google spokesperson has now sent this statement on its News Showcase proposals in Germany:

“Google News Showcase is the kind of licensing programs that had been demanded for years by publishers as well as policy makers. We are glad that more than 700 publications globally are already part of Showcase, with more than 90 publications in Germany alone. These are new services that bring value to consumers and we’re happy to work with the German competition authority on finding the right approach efficiently. We have already made some changes and proposed further measures for improvement and are looking forward to any further feedback. At the same time we continue this important work together with our publishing partners in order to support quality journalism in Germany and beyond.”