It would be easy to think PC sales dropped worldwide last year amid chip shortages, but that conventional thinking would be wrong. As it turns out, Canalys reports that PC shipments grew 15% year over year in 2021 and were up 27% over 2019, with a whopping 341 million units sold.

While the fourth-quarter numbers were up just 1% over the previous year, 2021 was still the best year since 2012, according to the firm.

As Canalys senior analyst Ishan Dutt pointed out, PCs had a great year in spite of chip supply issues, and he sees PCs as firmly entrenched as part of our work and leisure lives, with it becoming the norm to have multiple PCs in the same home in developed areas of the world.

“For the market to post double-digit growth over an impressive 2020, despite the constant cloud of supply constraints, speaks volumes about how strong PC demand has been over the last 12 months. Taking a long-term view, the most important developments in 2021 were the large increases in PC penetration and usage rates,” he said in a statement.

The big winners in 2021 were the Big 3 PC makers: Lenovo, HP and Dell, with Apple coming in fourth. It’s worth noting that while everyone had a good year, as the chart below shows, Apple had the largest growth number year-over-year at 28.3%, while Acer was second with 21.8% growth in spite of being fifth overall in terms of shipment numbers. 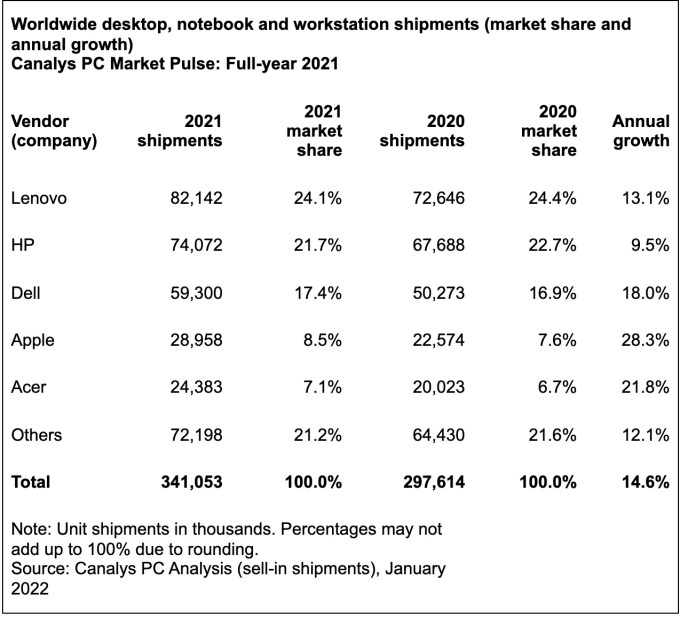 Although chip shortages are expected to persist into the new year, and there is speculation that the education market may be saturated, Canalys still believes that 2022 will be a strong year for PC sales. In fact, Canalys analyst Rushabh Doshi said the market would likely have been bigger in 2021 if not for the supply issues.

“The primary reason why we are in a shortage situation is that demand is outstripping supply. It is [definitely true] that had the supply situation been better, the PC industry would have grown faster, and be [even bigger],” Doshi told me.

He sees a market that will continue to expand into the future. “Looking at an unconstrained view, the demand for better and faster PCs is now more pronounced than ever, not just in work, but also at home. With the importance of PCs reinforced in the past two years, we believe that the growth is here to stay,” he said.