A new social app, Locket, popped to the top of the App Store charts in recent days thanks to its clever premise to put live photos from friends in a widget on your iOS homescreen. In other words, it turns Apple’s widget system — typically used to showcase information like news, weather, inspirational quotes or photos from your own iPhone’s gallery — into a private social networking platform.

The idea for the app was dreamed up by Matt Moss, a former Apple Worldwide Developer Conference student scholarship winner and recent UC Santa Barbara grad, who had been building a user research and testing platform called Hawkeye Labs.

Locket, he admits, was originally a personal side project — not his main focus.

“I built it as a present for my girlfriend for her birthday last summer,” Moss explains. “She was going back to school in the fall, so we were about to start a long-distance relationship,” he says. “The process of getting a little photo from her on my homescreen…seemed really appealing. Just a nice way to stay in touch.”

The developer build the app over a week or two and ended up using it with his girlfriend fairly extensively over the past six months, sending each other an average of five photos per day. As Locket also stores the photos sent and received in its history section, the app became a fun way to look back on their photos, as well.

Soon, the couple’s friends started taking notice and asked if they could use it with their own significant others, family or friends. So Moss decided to make Locket publicly available to users on the App Store.

The app launched on New Year’s Day, and has now seen more than 2 million users sign up as of this morning. On Sunday, Locket became the No. 1 app overall on the U.S. App Store, per Apptopia’s app store data, and had become the No. 1 Social Networking app the day prior. Apptopia reports only seeing around 1 million global installs so far, with about 31% from the U.S. — but its data is only through yesterday.

Moss credits Locket’s rapid adoption to going viral on TikTok, where he published videos to an accompanying company account for Locket where he could show off the app in action. His video received some 100,000 views over just a couple of days. Other TikTok users then began making their own content featuring the app and the custom sound used on the original Locket video.

This helped blow up the app even more among TikTok’s young user base. In fact, one video made by a TikTok user in the U.K. topped 5 million views in a single day, Moss noted.

While it’s common for app developers to leverage TikTok to drive installs at the time of launch, Moss denies that any sort of paid influencer marketing took place here, nor did he run paid advertisements on TikTok or elsewhere, he says.

Today, Locket remains in the No. 1 position on the iPhone’s Top Free Apps chart as a result of its TikTok exposure — and because its early adopters invited their friends to download the app and check it out, driving further installs.

To get started using the app, download Locket from the App Store and sign up by verifying your phone number.

Locket then requests access to your iPhone’s Contacts and Camera in order to function. Ideally, Locket would allow users to bypass full address book access to instead allow users to invite friends through standalone invitations, as that would be a more privacy-focused approach. Moss tells us he’s considering changing this aspect of the app’s behavior, which is meant to make the app easier to use. However, he says Locket doesn’t store your contact info nor send its invites automatically using its own phone number — it just pops up the iMessage window so you can customize the text sent to your friends.

However, if you choose to decline Apple’s pop-up, which requests permission to pull in your Contacts, you aren’t able to use the app at all, we found.

After inviting and adding friends to join you on Locket, you’ll then add the app’s widget to your iOS home screen. The widget will showcase your friends’ photos as they add images throughout the day. You can also launch the app at any time to add photos of your own to be sent to your friends’ widgets. 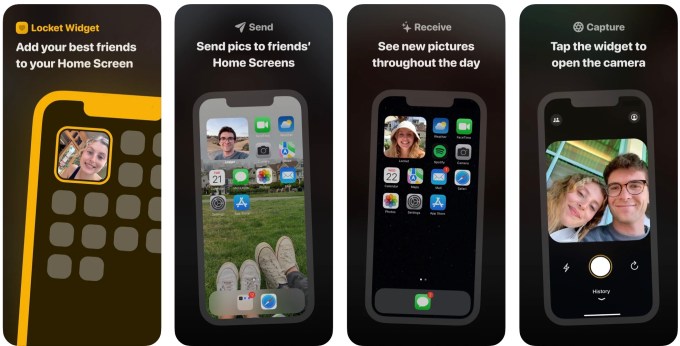 There isn’t much more to the app than that, really. There are no fancy camera filters or effects, nor can you upload images from your Camera Roll. The experience is designed to be a way to share photos in real time with a small group of up to five friends or loved ones.

Locket’s quick shot to the top of the App Store has Moss now thinking of his next steps. He plans to later introduce a subscription model and support for additional widgets and, at some point, an Android version. As to whether or not he’ll take on outside investment, however, remains to be seen.

But the creator believes there’s potential in Locket beyond its current photo widget experience — perhaps even growing out a set of features inside the app as users share more photos over time.

“I think there is something pretty meaningful to be built in the close friends and family space,” Moss says. “I do think people — especially younger people — are a little bit more tired of apps that are kind of very ad-centric and very metric-centric.”

“You end up with these huge social circles on the app — where you have 1,000 friends on Instagram, or you have to send Snapchats back and forth with your 100 closest friends — which actually takes a lot of effort at the end of the day,” he continues. “So the idea of making something that’s more geared towards those five closest people, or those 10 closest people, and then providing a way to make your phone feel more personal and geared towards people instead of these apps — I think there’s a real appetite for that,” Moss adds.

Locket isn’t the first to offer a collaborative photo widget experience. Another app called Magnets, launched in 2020, had a similar idea but also supported sending short text messages to friends through its widget. Other apps competing in this space include Ekko, Widgetgram, Lettie, Tile Widget, Fave and others. However, none have yet to achieve any sort of critical mass.

Locket is currently a free download on iOS but has only achieved a 3.4-star rating, as some users didn’t seem to understand how to make the widget work, or were struggling with the onboarding process. The latter seemed to largely occur during the height of its viral surge when the app was experiencing some issues, but we’ve since tested Locket and found the problems to be resolved.