TikTok is testing its own version of Twitter’s retweet with the addition of a new “Repost” button that allows users to amplify videos on the platform by sharing them with their own followers. The new Repost button is found in the “Share” menu where you could otherwise send the video to friends through messages, texts or social media posts elsewhere. Except, instead of sharing the video with friends directly, the Repost button promotes the video to your friends on TikTok.

But unlike a Twitter retweet, the reposted video will not show on your own TikTok profile — it only sends the video out to your friends’ For You feeds.

The button is also not available across all of TikTok.

For example, if you find a video through the Discover page or in your TikTok inbox from a friend’s share, you won’t see the Repost button there. It only appears on videos you come across when you’re browsing your own For You feed on the app, we’ve confirmed. In other words, it’s a way to boost the visibility of video you’ve already been recommended algorithmically and now want more people to see. However, it stops short of requiring users to create their own video to make that happen — by either stitching or dueting with the original content, which is how users re-share others’ videos today. This provides a low-friction way for users to engage with TikTok videos and re-share them and could encourage more passive users to participate on the platform. 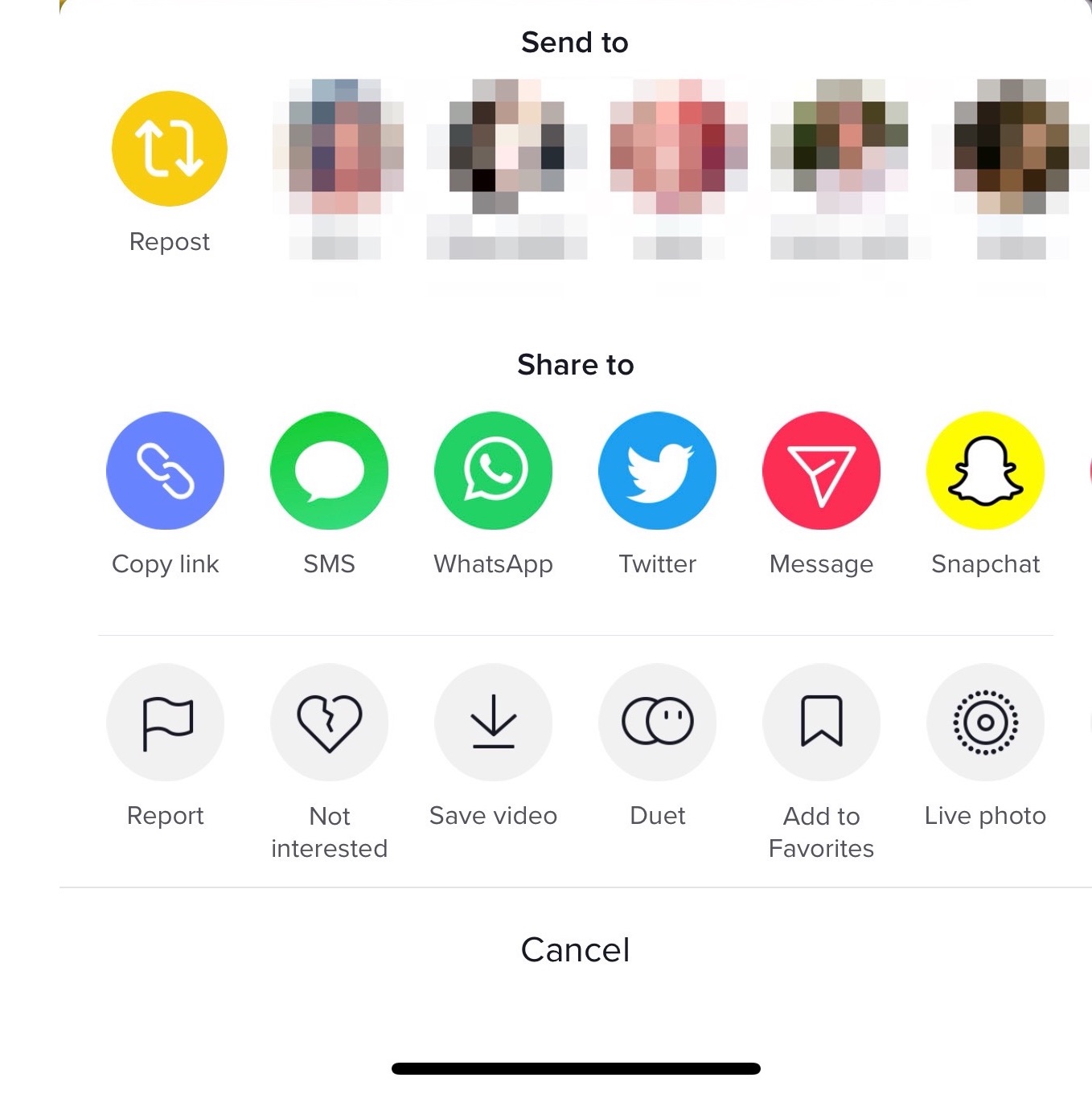 The feature is also one that hails back to a TikTok precursor: the short-form video platform known as Vine, which was acquired by Twitter and shut down years ago.

Vine had also once offered a repost button (or in its case, a “revine” feature) that allowed users to repost a video for increased visibility. But Vine’s button had a mixed reception as some creators would abuse the feature by offering “revine 4 revine” — that is, groups who would promote each others’ content by agreeing to “revine” all the group members’ videos. Instagram, too, faces a similar problem where groups of Instagram users agreed to systematically exchange likes and comments to game the service’s algorithms. TikTok, which is known for its eerily accurate, highly personalized For You feed, would seemingly run the risk of diluting its recommendations with “reposts” if creators also attempted to game the algorithm via the new Repost button.

But TikTok is attempting to address this problem by making its Repost button work differently than the “revine” — at least for the time being. Users will only see re-shared recommendations if they’re mutual friends with the person who reposted the video. That means you won’t necessarily see a larger creator’s recommendations unless that creator for some reason also follows you, too. By limiting recommendations to mutuals, TikTok combats the risk that would come from creators teaming up. But it also limits the potential for reposted content to gain a significant number of new views — like if it was re-shared by a popular creator, for instance. 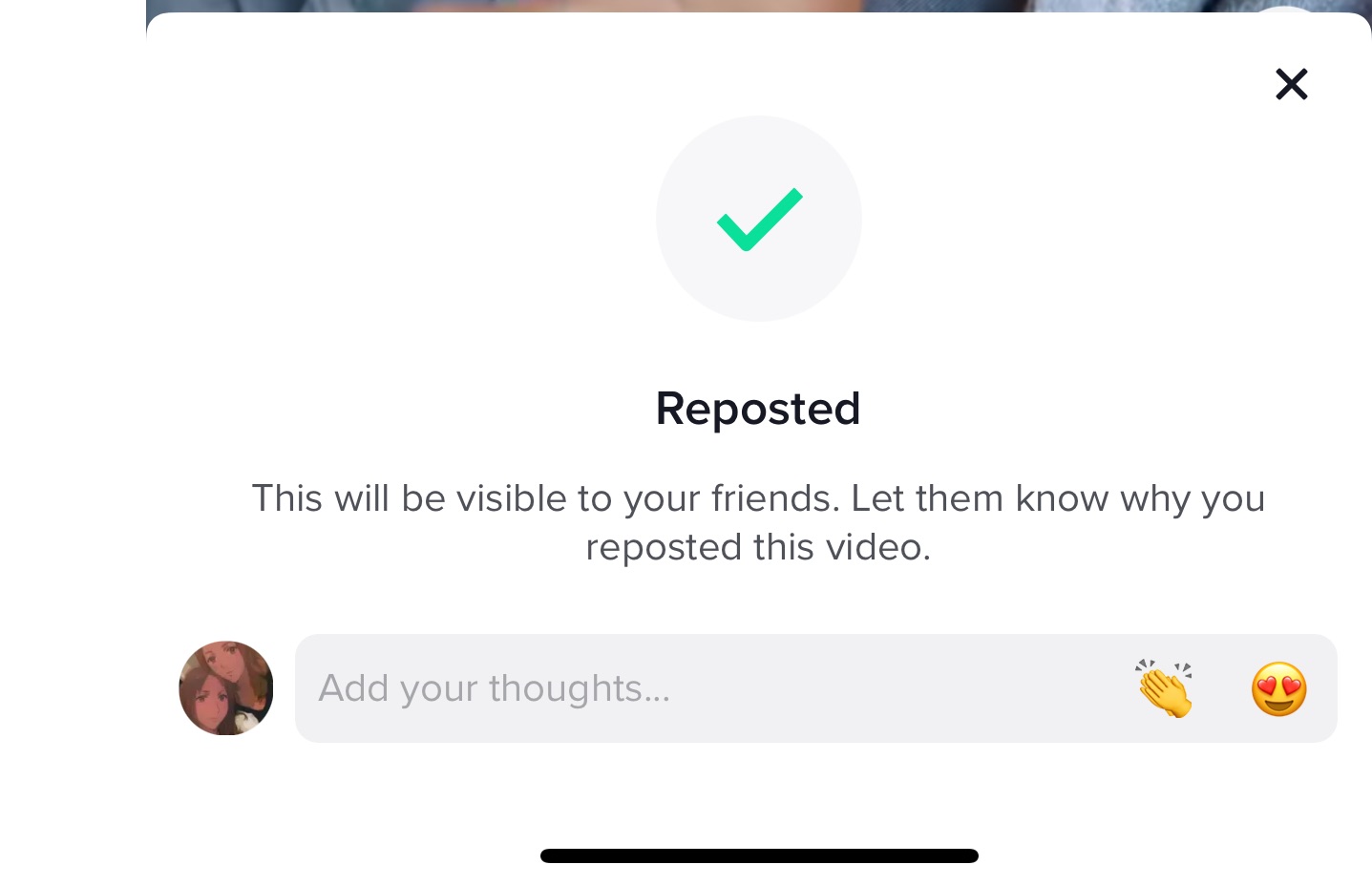 TikTok confirms the button is being tested on the publicly available version of its app with a small number of users for the time being. However, it’s already attracted a lot of attention on Twitter as users have been posting screenshots of the new feature. Some people seem to believe it’s a new feature everyone has access to, but that’s not yet the case, we understand.

“We’re always thinking about new ways to bring value to our community and enrich the TikTok experience. Currently, we’re experimenting with a new way for people to share TikTok videos they enjoy,” a TikTok spokesperson told TechCrunch, after clarifying the feature’s functionality.

If you happen to have access to the Repost button, you’ll be able to use it when browsing your For You feed. When you tap the button on a video you want to promote, TikTok informs you the video will be visible to your friends. The app also prompts you to share a few words about why you reposted the video. These don’t appear as comments on the video, but are flagged directly on the video itself above the creators’ name and video description. Here, you’ll see which friends have reposted the content and can tap the “reposted” label to read their comments in a small, pop-up window.

And if you change your mind about your Repost, you can tap into the Share menu and then on “Remove Repost” to undo your re-sharing. This will delete the message you’ve added, as well, TikTok notes.

In some cases, TikTok users are seeing the Repost button labeled as “Recommend” because TikTok is still playing around with the language it wants to use here. But like the Repost, the Recommend button also prompts users to share why they’re re-sharing the video with others.

If TikTok chooses to roll out the Repost button more broadly, it could prove to be a new way creators get their content discovered on a platform that is today more about algorithmic recommendations than it is about personal suggestions. But TikTok has likely observed how many of its users already leverage its in-app messaging system just to send videos to friends and is now trying to find a way to better incorporate that signal into the For You feed itself.