Skio, a startup that aims to take the pain out of selling subscriptions for brands on Shopify, has raised $3.7 million in a seed funding round.

Kennan Davison, an engineer who previously worked at Hulu and Pinterest, founded the startup in April.

He describes Skio as a fintech and an infrastructure company as a pivot from a previous idea that had gone through Y Combinator. Skio is taking on incumbents like ReCharge Payments, which too has built subscription software for e-commerce brands and was valued at $2.1 billion earlier this year after a $227 million raise.

The New York-based startup helps Shopify brands sell subs by managing and scheduling payments as well as anything consumer-facing around the process, such as building a customer portal to manage subscriptions and SMS subscription management, among other things.

It claims to use modern frameworks that allow it to “build much quicker” than existing offerings.

“We started at the bottom of the market with smaller Shopify merchants,” Davison told TechCrunch. “Now we’re migrating bigger customers from ReCharge.” 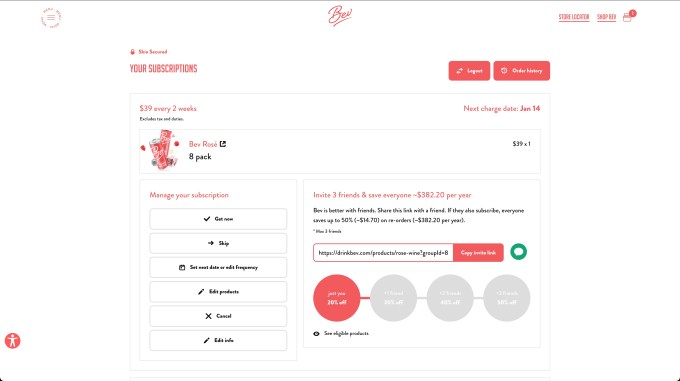 The entrepreneur’s experience with subscriptions goes back to high school, where he said he started skipping class to do web development for a subscription box startup called Conscious Box. After that, he worked as an engineer at Hulu, where he built an app for managing subscription discounts. He then was a growth engineer at Pinterest, where he says he ran more than 200 A/B tests around increasing user conversions.

Skio is only helping merchants on Shopify with subscriptions for now, but Davison’s goal is to be working with merchants one day on “all of the internet.”

Presently, Skio has five employees but is planning to use its new capital toward product development and to “hire aggressively for world-class software engineers.”

“We’re in a position to give significant equity to the right folks since I started this solo,” he said.

Lead investor Wittenborn told TechCrunch he had been following the Shopify ecosystem in recent years after making similar infrastructure investments in other growing ecosystems in the past, such as Chainalysis in crypto, RevenueCat in mobile and OwnBackup in the Salesforce ecosystem.

“When I was introduced to Kennan it struck me that he was building a fundamental piece for Shopify-based subscription services and a few reference calls with his and potential customers quickly confirmed that his product was much more promising and flexible than existing solutions,” Wittenborn wrote via email. “There is only one serious competitor, ReCharge, which seems to have gotten comfortable with the dominant position in the market. This has led to a frustration in the ecosystem and created the opportunity for someone like Kennan to come along and shake things up with a more responsive, integrated product and better customer support.”