Two years ago, a group of entrepreneurs in Pakistan began surveying the market to understand why financial services weren’t reaching the majority of merchants in the world’s fifth most populous nation.

On Friday, Tiger Global said it is backing their startup, CreditBook, to help address those challenges. This is the New York-headquartered firm’s first investment in Pakistan.

A number of other investors, including Better Tomorrow Ventures, Firstminute Capital, Banana Capital, VentureSouq, Ratio Ventures and i2i Ventures, as well as angel investors Sriram Krishnan and Julian Shapiro also participated in the $11 million pre-Series A round. This is also Firstminute Capital’s first investment in the South Asian market.

“We started the research and began experimentation in late 2019,” said Iman Jamall, co-founder of CreditBook, in an interview with TechCrunch. “I was working as a service designer on a project for one of the largest Pakistani banks at the time and was observing different persona types to understand why financial services hadn’t made inroads in the country.”

The challenges that Jamall, one of the few female founders in the country, identified were cash flow, the role of credit and the social relationships around it and the overreliance on “paper for everything essentially,” she said. 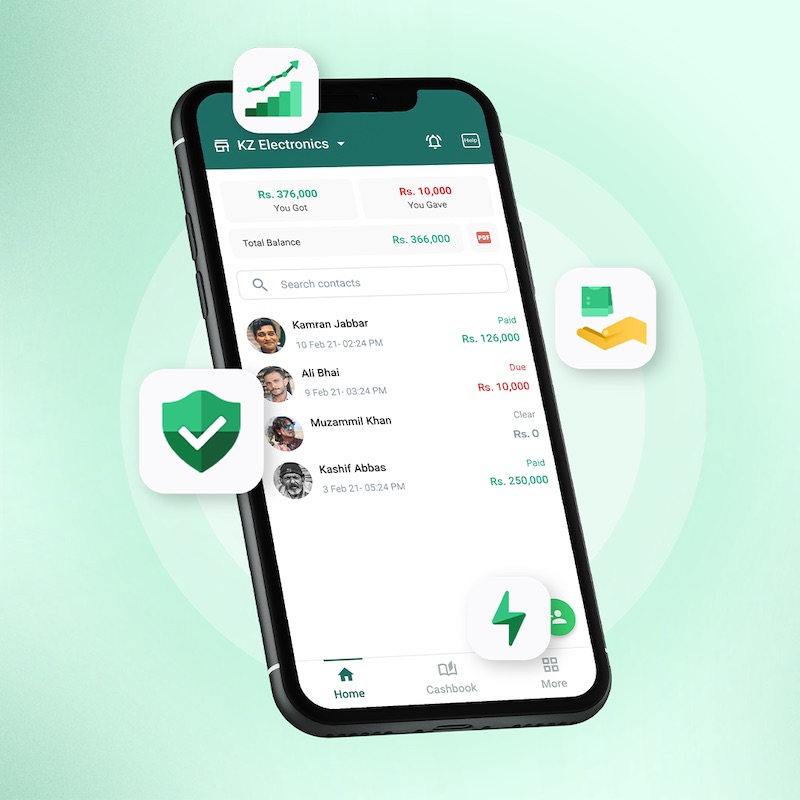 The overreliance on paper to maintain ledgers and the always-running low cash flow is a challenge that merchants in many markets in South Asia and Southeast Asia share. As we previously covered, often these small businesses run on informal credit and rely on money they secure from selling their existing inventory to buy their next batch. The customers buy things for weeks and sometimes months before they clear the tab.

These shortcomings are hurting these small businesses and mom and pop stores and impeding their growth at a time when large e-commerce giants are attempting to court customers.

CreditBook today offers a bookkeeping app to merchants, enabling them to digitize the handwritten ledger that they have traditionally used to keep track of daily accounts.

The eponymous mobile app has amassed merchants in more than 400 towns and cities, the startup said. CreditBook declined to reveal the number of merchants who are using the service, but said that the number of transacting users has increased by 10 times since last year.

Digital bookkeeping is the startup’s marquee offering today, but Jamall said CreditBook is working on building and testing financial products on top of it. It’s too early to unveil precisely what those financial products would look like, she said. (But it’s definitely not e-commerce, she said.)

Jamall offered some context around the areas CreditBook is exploring. “In Pakistan, there is a huge whitespace in payments. But mobile money has started to gain traction, especially amid the pandemic,” she said, adding that the local regulator has also made a push in recent years to accelerate the adoption of mobile payments and is focusing on building an instant payments infrastructure. (Similar to India’s UPI, which in recent years has become the most popular way users transact online.)

It’s a massive opportunity. CreditBook estimates that there’s a $45 billion unmet financing gap for small businesses. Pakistan is home to more than 220 million people, 60% of whom are under the age of 30.

“We are excited to partner with CreditBook and make Tiger Global’s first investment into Pakistan,” said John Curtius, a partner at Tiger Global, in a statement. “The investment is a testament to the incredible traction and vision demonstrated by the team.”

Friday’s announcement builds on what has been a watershed year for Pakistan’s fast-growing startup ecosystem as several global investors, including Kleiner Perkins, Addition, 20VC and Buckley Ventures make their first bets in the country. Startups in Pakistan have raised over $300 million this year, more than previous six years combined. Grocery delivery startup Krave Mart announced earlier this week it had raised $6 million in its pre-seed funding round.