Purchasing new glasses used to be about finding the right pair that would go with everything until you needed the next set. Pair Eyewear turned that on its head with magnetic frames, called Top Frames, that enable glasses-wearers to change their style with any outfit or any occasion for as little as $25.

Between 2020 and 2021, Pair grew its revenue 10 times year over year and attracted the attention of investors who pumped $60 million of new Series B funding into the company to give Pair $73.5 million in total funding. The round included investors like Rick Yang of NEA, NFL player Christian McCaffrey, Olivia Culpo, Sterling K. Brown and YouTube and professional gamer Ninja.

We profiled Pair and its co-founders Sophia Edelstein and Nathan Kondamuri back in April when the company secured $12 million in Series A funding. At the time, the company was touting its magnetic base frame and interchangeable Top Frames for children.

“One of our main priorities was to expand, and while we are focused on children, we launched a full adult collection and started growing,”  Edelstein told TechCrunch. “We were capitalized, but received so much investor interest. With how well the adult collection was doing and after meeting with Rick, it made sense to partner and put together more capital to grow.”

Since the Series A, the company secured licensing deals with brands like Marvel, Major League Baseball and Harry Potter. Pair Eyewear began 2020 with four people and now has 65 full-time employees, most of whom joined in 2021, Kondamuri said. In addition, more and more adults wanted Top Frames for their glasses as they purchased them for their children, so the company began its line of adult Top Frames, Edelstein said.

The new capital will enable the company to continue growing, Kondamuri said. In 2022, the company intends on attracting a broader customer base, growing its team and offering unique products. In addition to current licensing agreements, the company will add more brands in the celebrity, art and sports areas to its list that also includes DC Comics and Sesame Street.

What they also learned was that as Pair Eyewear leveraged more social media coverage, adults also were asking for a way to change their style on a continual basis. 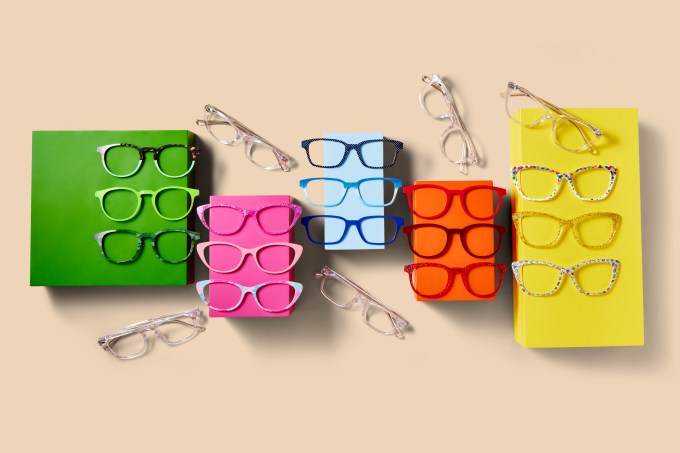 “They want to match glasses to their outfits and moods, and we found that adults are even better customers because they purchase more rapidly for themselves,” Edelstein said. “We have customers that now own hundreds of tops, and there are now thousands of posts on TikTok of them switching them out on.”

If Pair’s announcement is any indication, the direct-to-consumer eyewear market is doing quite well. Other companies are working to make glasses more hip, including Cheeterz Club, while Warby Parker found success when it made its public debut via direct listing in September. Edelstein believes Pair Eyewear’s differentiation is its razor blade business model, which brings back customers on a monthly basis as new styles drop.

Yang says that at a macro level, Pair has enabled a new consumer fashion category and that in seeing how consumer behavior has changed over the years, there is organic excitement for what the company is doing.

In fact, Pair’s recurring and repeatable business model is proof of why Yang himself owns the number of Top Frames that he does, Yang added.

“It is one of those things where there is product market fit, but the more exciting piece is changing the way people think about eyewear,” he said. “What Pair is doing is not only in a capital efficient manner, but some of the numbers look software-like, and that is exciting. To me, the overlay of a big consumer trend they are riding, and in so many ways enabling, is an important part of our investment thesis.”