Apple has released a new Android app called “Tracker Detect” to help people who don’t own Apple products to identity unexpected AirTags near them in an effort to boost privacy. If a user thinks they may be being tracked, they can use the app to scan for nearby AirTags. If the app finds any, it will flag it as an “unknown AirTag.” If a detected item tracker is known to be moving with a user for more than 10 minutes, users will be able to play a sound on the detected item tracker to help locate it. From there, the user will be given instructions on how to learn more about it and how to disable it by removing the battery.

“Tracker Detect looks for item trackers that are separated from their owner and that are compatible with Apple’s Find My network,” the app description reads. “These item trackers include AirTag and compatible devices from other companies. If you think someone is using AirTag or another device to track your location, you can scan to try to find it.”

At launch, the Tracker Detect app is compatible with supported Find My network supported item trackers, which include Apple’s AirTag and the Chipolo ONE Spot. It won’t work to find other non-Find My compatible trackers, like Tile, for example.

It also can’t help users keep track of AirTags associated with an Apple account, so it can’t be used to actually take advantage of AirTags’ full capabilities.

“AirTag provides industry-leading privacy and security features and today we are extending new capabilities to Android devices,” a spokesperson for Apple told TechCrunch in an email, confirming the new app’s launch. “Tracker Detect gives Android users the ability to scan for an AirTag or supported Find My enabled item trackers that might be traveling with them without their knowledge.” 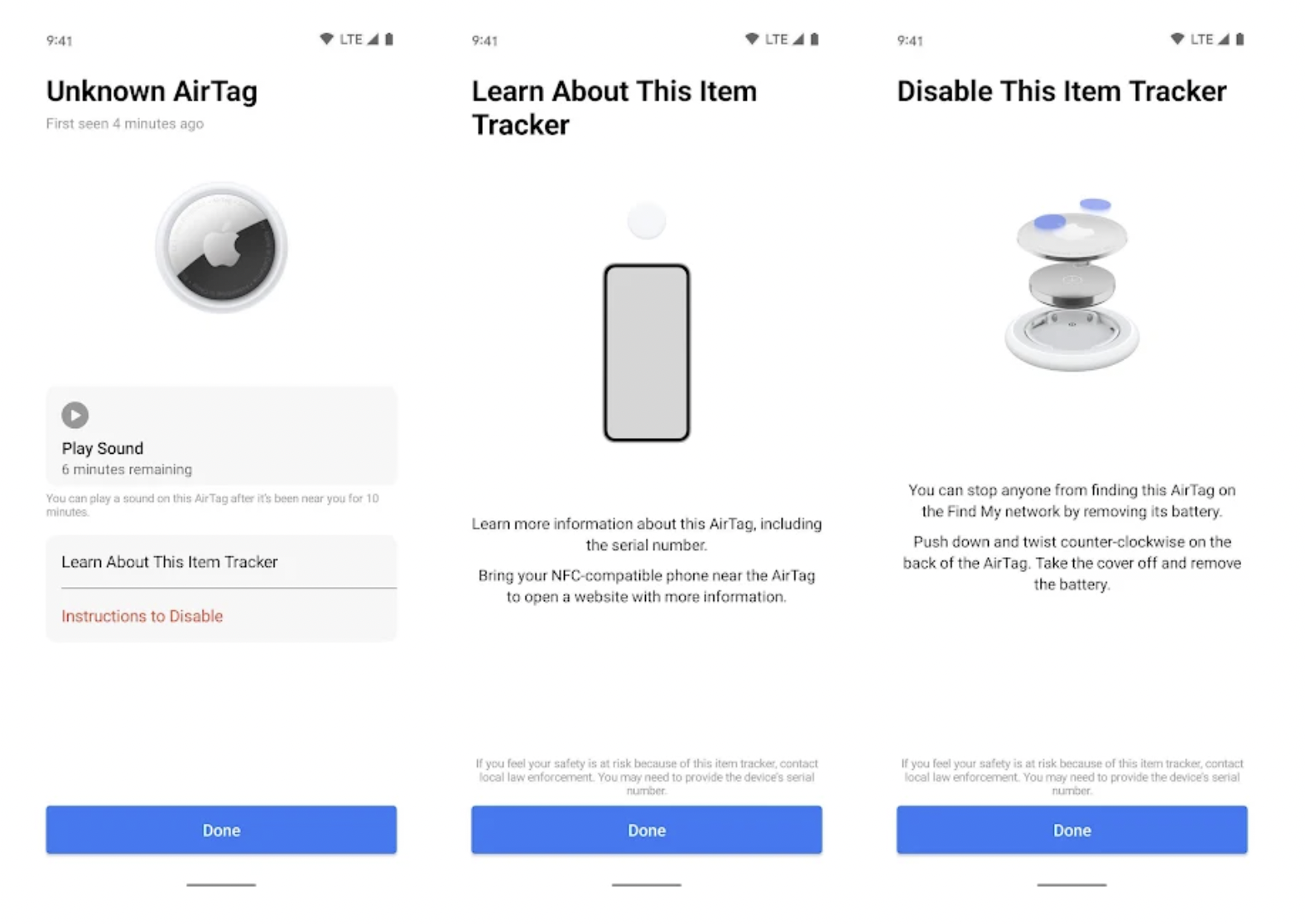 Since the launch of Tracker Detect yesterday, the app’s page on the Google Play Store has been flooded with negative reviews. Many reviewers say the app would benefit from an automated detection feature instead of relying on users to manually scan for unknown AirTags. Other users have stated that the app has been unable to detect AirTags in their homes. It’s worth noting that the AirTag needs to be away from its paired device for at least 10 minutes before Tracker Detect is able to detect it and notify the user. TechCrunch has reached out to Apple for a comment.

The launch of the new app follows concerns that Apple’s AirTag could be used to secretly track people, as they’re small enough to be discreetly placed in a bag or a coat. A Washington Post report from earlier this year explained how Apple’s AirTags made it easier to potentially stalk someone without them knowing. There were many other reports that also alleged that the tracking devices can be used to secretly surveil individuals.

In response to these reports, the tech giant updated the time period after which an AirTag that is no longer with its owner will play a sound when moved. Originally set for three days at launch, Apple changed the time period to a randomized time between 8 and 24 hours. A user’s iPhone will also display an “Item Detected Near You” message if it detects an unknown AirTag near it, which means that iOS users don’t need a separate app to locate unknown AirTags.

However, since there wasn’t a way for Android users to discover nearby unknown AirTags, Apple had also announced that it planned to launch an Android app to enable users to detect an AirTag that may be traveling with them.

Despite the concerns raised over AirTag, Apple’s support for scanning for trackers put the company ahead of the competition, which had yet to offer any such anti-stalking functionality. Following the launch, competitor Tile said it would allow anyone to use the Tile app to perform a manual scan at any time. The feature is expected to arrive in early 2022.

Apple launched AirTag earlier this year in April. They are priced at $29 each or $99 for a pack of four. The item tracking uses the company’s proprietary U1 ultra-wideband chip for what Apple calls “Precision Finding.” The device also uses Bluetooth LE (low-energy).