If investors complained about Wall Street 80 years ago, they’re howling now. Industry players get richer and richer, while many investors see mediocre results after fees.

Asset management is a highly unusual and somewhat baffling industry. Here are six main examples of just how peculiar this industry is.

The asset management industry rarely delivers what it promises: Alpha

Alpha is a zero-sum game, according to Bridgewater founder Ray Dalio. By contrast, most industries are positive-sum: If you eat a great steak dinner, it doesn’t imply that others have to eat hot dogs. In asset management, each new money manager who generates alpha (returns above the passive benchmark performance) does so at the expense of other managers who underperform.

Your own investment’s value may change because of a change in the value of the underlying asset and/or market preferences. However, few investors can directly impact the value of the underlying asset, except for private equity and venture capital investors with portfolio acceleration strategies. Celebrity investors like George Soros can influence market preferences, but most of us don’t have that advantage.

Diversity and inclusion are the most readily solvable issues, and the inevitable aging of the “pale, male and stale” leaders of the industry will create room for new entrants.

In fact, it is mathematically impossible for the mean investor in a given sector to beat a low-cost index of that sector after expenses. We’d argue that money managers playing a positive-sum game include those who focus on well-developed sectors for which indices are not readily available (e.g., private companies, frontier markets, cryptocurrencies) and/or nascent asset classes.

For example, hedge funds, on average, have underperformed on a net-of-fees basis in both U.S. equities and bonds since 2000. The HFRI Index returned 18.3% annually during its initial 10 years from 1990 to 1999, but it returned just 3.4% annually over the 10 years to 2016. Similarly, according to Morningstar’s Active/Passive Barometer, in the five years ended October 2021, only 26.4% of U.S. large cap, 22.7% of U.S. small cap and 24.3% of global large-cap active equity mutual funds outperformed their passive competitors. 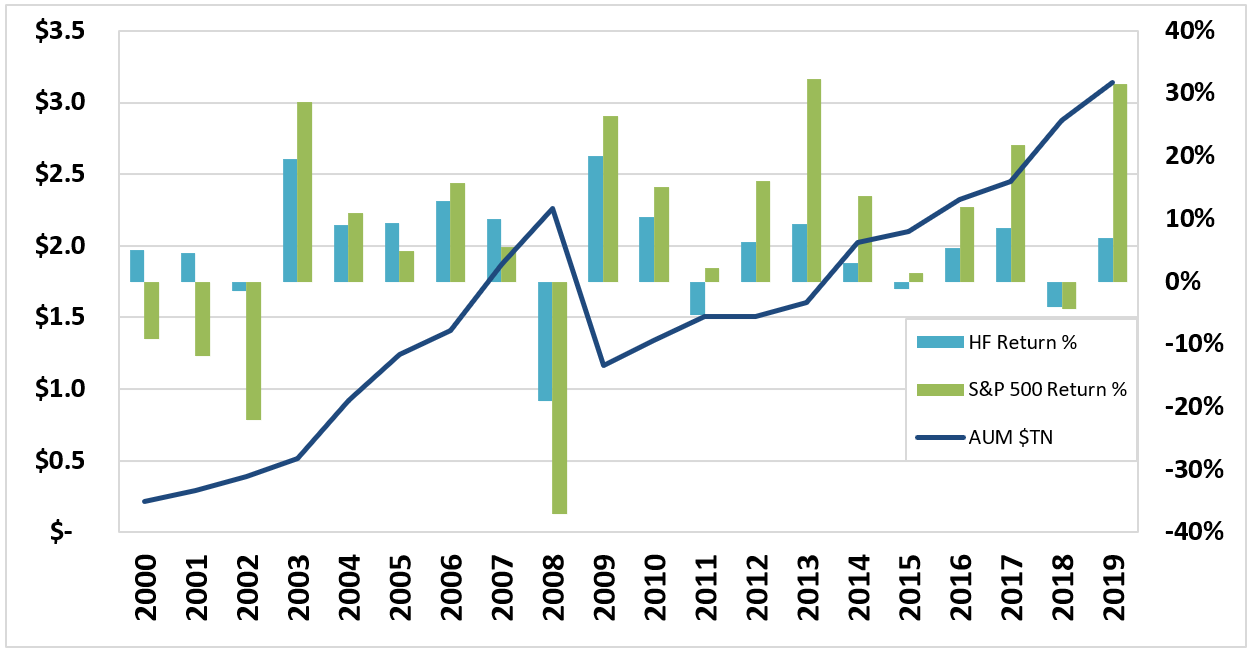 “Given better analytics, institutional investors have realized that there is little alpha and much of the excess returns are explained by risk premia,” Nicolas Rabener, managing director of FactorResearch, said.

Amit Matta, a risk management expert, observed that performance is often overstated (and risk understated) due to the illiquid nature of some of the underlying investments, which allows room to manipulate pricing in favorable ways.

However, a large group has different objectives — corporate players. “They are fully 50% of the primary market (sellers) and are material players in the secondary market (M&A), which cumulatively makes the markets a positive-sum game. It’s possible for all asset managers to make money when they buy a successful IPO or sell their holding to a corporate buyer.”

Standard compensation models motivate money managers to add more assets under management. This contributes to the “winner takes all” trend, where we see a steadily growing concentration of AUM at the largest money managers. The argument is that large hedge funds have the resources and talent to beat markets. The reality is far from that.