At Apple’s Worldwide Developer Conference in June, the company teased its plans to incorporate support for home, office and hotel keys into Apple Wallet, as well as state driver licenses. Today, Apple is announcing Hyatt will become the first hotel partner to support the new technology. The hotel chain will roll out support for room keys in Apple Wallet for their guests, starting initially with six U.S. properties, with more to come in the future.

The new system will work alongside the World of Hyatt mobile app. After making a reservation in the app, you’ll be presented with a screen that offers you the option to add your room key to Wallet. This experience is similar to when you book tickets or passes and then have the option to tap a button to add those items to Apple Wallet for later access. And like other passes, you can add your hotel room keys immediately after booking your reservation. Of course, the door won’t unlock until the time of check-in.

Once the key is added to your Apple Wallet, you’ll be able to see the reservation dates, property name and your upcoming check-in date on the main screen. You can also tap on the three-dot menu on the upper-right to view more information about your stay, including your reservation number and other details about the property. Plus, you can launch the Hyatt app directly from within Apple Wallet to manage your reservation.

The hotel keys aren’t only available on your iPhone — they’re also automatically added to the Wallet app on a paired Apple Watch.

In addition to the convenience of not having to keep up with a plastic hotel key card, this system may also allow guests to bypass waiting in lines in the lobby to check in. Instead, the app can notify guests when the room is ready and they can check in on their phone. When that process is completed, the room key will be enabled and will display your room number so you can just head to your room directly. This could help customers reduce their COVID exposure, as well, as they won’t have to wait in lines alongside other guests for check-in.

Apple says guests with multiple rooms will be able to add them all to their same room key and wallet for their stay, so they don’t have to remember which virtual key to tap. And like the Express mode used by transit pass holders, hotel keys can also work in an Express mode where you won’t even need to unlock your device to open the door. The key also work to unlock access to hotel amenities, like the gym or pool. 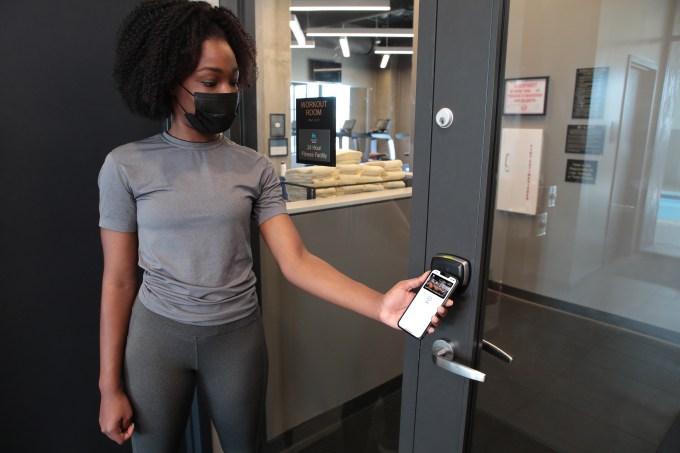 The new system will require hotels to update their room lock infrastructure to support NFC technology. This allows the customers to open hotel doors with a tap, like they do today when using Apple Pay at supported point-of-sale terminals. Hyatt is working with Assa Abloy on its solution, but Apple is open to working with the vendors the hotel chooses. The company declined to say which other hotel chains may be working to roll out the technology, but notes Hyatt has plans to expand access across global properties.

Support for hotel keys is rolling out today to iPhones running iOS 15 and Apple Watch devices running watchOS 8. Hyatt tells TechCrunch it’s currently only working on a cardless solution for iOS users, though it hasn’t ruled out working with Google down the road.