Sometimes I wonder if the analysts on Wall Street, who I’m sure are smart people, understand how the technology industry works.

There is this persistent notion among investors that stocks that did well during the pandemic like Zoom, DocuSign and Okta will suddenly fade from our minds as soon as the pandemic subsides (if that ever happens). The same analysts who fawn over a stock one month dump it the next when the growth projection is suddenly smaller (and much more realistic), knowing full well no company can maintain the pandemic numbers we were seeing.

I’m not here to give financial advice, but I can tell you that digital tooling is not going away. The cloud is not a passing fad. It is not some pandemic-driven flash in the pan. It is in fact, the future of work, the future of computing, and anything that’s not digitized now will be sooner than later. The question is why investors can’t understand this and connect it to the short- and long-term performance of a given SaaS stock.

The cloud ecosystem consists of three main elements — infrastructure, platform and software — all delivered as a service, as they say. According to data from Synergy Research, the entire cloud ecosystem grew 25% in the first half this year to $235 billion.

Most people buy their software from companies like Salesforce, Okta, Box, Dropbox, DocuSign, Workday, ServiceNow and so many more, which manage it for them and provide updates on a regular basis automatically. Just about all software is delivered as a service these days–  unless there’s a technical reason that makes more sense to manage it yourself.

For those folks, there is also software you can install in your cloud of choice or software you can build using one of the platform services and then install using the infrastructure services. What you choose and how you choose to do it could depend on a lot of factors, but the trend is toward the cloud on all fronts.

As Amazon-AWS boss Adam Selipsky pointed out during his keynote last week at AWS re:Invent, there is still only somewhere between 5% and 15% of workloads in the cloud. That leaves years of growth for an industry that was on a $180 billion run rate last quarter and shows no signs of slowing anytime soon.

But Wall Street seems most concerned with the SaaS companies, the software firms built atop AWS and other public clouds. When Zoom was flying high during the pandemic because everyone from students and churches to your family and your job moved online, investors took notice in a big way.

They inflated the value of Zoom stock to an almost absurd level. To be fair, they were reacting to the monstrous pandemic-driven growth the company experienced. During the height of the lockdown, Zoom logged five straight quarters of triple-digit growth. You read that correctly: In the March 2021 earnings report, which corresponded to the company’s Q4 2021, Zoom’s growth peaked at 369%.

Investors saw five quarters of growth like that and lost their minds, thinking it would last forever. It didn’t. The stock peaked at $559 per share in October 2020 before hitting a steady decline. Today it sits at around $184 per share. That’s a precipitous drop. 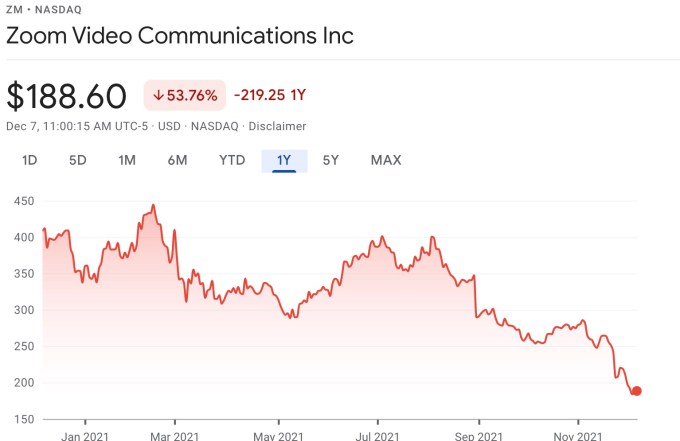 Did Zoom stop being popular? Did the need for video conferencing suddenly evaporate? No, of course not. People are still making liberal use of Zoom. The company is even attempting to diversify from video conferencing into other areas.

Sure, their growth is much more modest, but also much more realistic. It’s where you would expect a company like that to be — around 35% for the most recent quarter on over $1 billion in revenue. I think most companies would take that. Zoom was never going to maintain those kinds of growth numbers. Nobody ever could, but Wall Street rode the wave, watched it crash back down, and then complained about it.

At this point, we know that video services are a big deal. We know that Zoom is the market leader. We know the company is on a $4 billion run rate. These are all solid metrics, but the stock continues to plummet. At some point, you have to accept the current reality and stop punishing the stock.

On Friday, DocuSign lost an astonishing 40% of its stock value. Did people suddenly swear they would stop signing digitally because it was too easy? Did DocuSign stop being the market leader? As my colleague Ryan Lawler put it on Twitter upon seeing the beating the stock was taking:

And as I replied:

You nailed it Ryan. That's just it! We aren't. That's why this reaction is Wall Street short termism at its worst.

The reason for the plunge was not even a bad earnings report. In fact, the company reported $545.5 million, an increase of 42% year over year — results anyone could get behind, right? Well, like Zoom, Wall Street had over-inflated the value of the pandemic-driven growth and had serious buyer’s remorse when the company reported slowing growth. Not negative growth. Not huge losses. Simply slower growth. And investors got panicky and started dumping the stock.

Let’s not even discuss the herd mentality, the absurdity of everyone trying to jettison the stock at once. Nobody paused to take a deep breath and see if the fundamentals of this company were somehow less solid than the day before they reported earnings. Were there any red flags beyond the slowing growth, this absurd idea that if you are not continually growing at an accelerated rate, you are somehow less valuable? If you are growing at a reasonable rate, and you are not losing money, and it looks like that will continue into the future, that sounds like a good company to me.

But we saw it again and again last week, when Salesforce and Okta stock also dropped. Surprisingly, Box, a company that Wall Street loves to beat up, did pretty well after its report of the third straight quarter of growing revenue. This wasn’t even as good as Zoom’s 35% or DocuSign’s 42%. It was a solid 14%, and it showed continued progression upward instead of a movement down, and that seems to make investors more comfortable, even if the growth was more modest.

Wall Street is going to do what it does, and it usually makes money in the long run. But you have to wonder why decent growth, but not explosive growth, somehow sends investors into a tizzy. That’s what we saw last week, and we will probably see it again. Because for investors, even good sometimes isn’t good enough.

Let’s talk about the SaaS selloff