One of the biggest pain points for any business, but especially SMEs, is managing payroll.

A startup that has built payroll automation software to make the process less painful, Pento, has raised $35 million in a Series B round of funding co-led by Tiger Global Management and Avid Ventures.

The investment marks Tiger Global’s first time investing in London-based Pento. Avid has invested previously, along with other existing backers General Catalyst, Seedcamp and LocalGlobe. It also comes just six months after the startup raised a $15.6 million Series A led by General Catalyst. The company declined to reveal at what valuation either round was raised, saying only that its current valuation is “a meaningful step up” from its Series A.

Founded by Jonas Bøgh Larsen and Emil Hagbarth Rasmussen in 2017, Pento has now raised $53.4 million since its inception. The startup’s mission is to help free up companies from “onerous outsourcing and outdated software.” Pento says its SaaS offering fully automates the payroll process so that payroll managers and finance teams don’t have to rely on spreadsheets, PDFs, e-mails and manual checks. It claims to reduce the amount of time its customers spend on payroll by up to 80% by giving them “more control and visibility” over their monthly pay run. It does this by automating everything from tax calculations to payments to reporting requirements so that businesses of any size “can run their payroll in minutes instead of days.”

It must be doing something right. CEO and co-founder Bøgh Larsen said that over the past year, Pento has seen its revenue climb “10x.” While we don’t know from what base, the company did say it has seen “consecutive record-breaking months of growth” since its Series A. It’s also added several “major” new customers, including Britain’s Starling Bank, as well as integrations with partners such as Personio, Hibob and BambooHR. Other customers include tech startups Pleo and Cuvva as well as Honest Burgers and Beauty Pie. In general, Pento works with hundreds of SMEs and mid-sized businesses with 30 to 500 employees, and is increasingly serving larger enterprises with around 2,000 employees.

With its SaaS model, the company makes money by charging customers a set monthly fee.

While it plans to expand internationally in the future, Pento for now is focused on its home market of the U.K. and Europe, where it says that payroll outsourcing is a nearly $6 billion market that is expected to grow at an annual rate of 4.4%. In the U.K. alone, there are an estimated 20,000 small and medium-sized businesses and 4,000 mid-market businesses that are potential customers, it says.

“This represents an opportunity to transform payroll automation for nearly 10 million employees within the U.K. alone and a $1+ billion annual revenue opportunity,” Bøgh Larsen said. 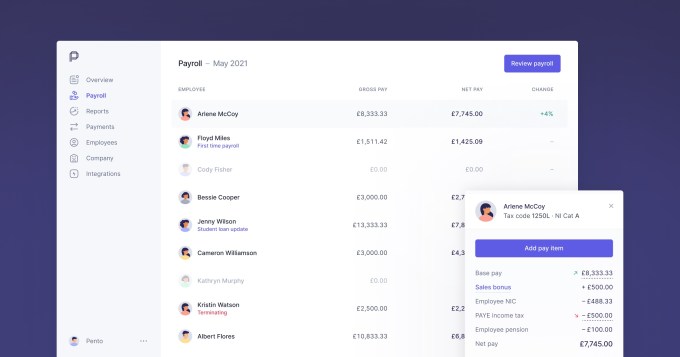 Pento plans to use its new capital in part to expand into new European countries and toward product development, service expansion and partner integrations. It also, naturally, plans to do some hiring. It’s already grown its team to 70 employees, up from 20 a year ago.

In addition to its SaaS offering, Pento provides infrastructure through its partnerships and integrations with existing accounting software, HR products and pension providers. It has also developed an open payroll API that is currently in beta, with the aim of allowing any business to build custom integrations to automate more of their workflows, such as time-tracking or shift planning. That API will also allow employees to share pay and compensation data with third-party apps and services to validate their income to credit agencies, as well as other financial and HR organizations, the company said.

“We built Pento having seen firsthand just how broken the current payroll processes are, and our continued success showcases just how strongly forward-thinking companies are asking for tools to fix this,” said Bøgh Larsen.

Competitors include France’s PayFit, ADP and legacy services-heavy payroll outsourcing businesses. Pento says that its main differentiator is that it is building a payroll-only product with an integrations-first approach, meaning that — as opposed to much of its competition — Pento partners and integrates with other tools/products (such as HR, expenses management and accounting) that customers use instead of building their own.

That distinction was a big draw for Addie Lerner, founder and managing partner at Avid Ventures, who said her firm has become increasingly excited about the “n of 1” market opportunity for Pento to be a pure-play payroll automation leader in Europe, and beyond.

“We continue to hear positive feedback from the market on Pento’s strategy of focusing on payroll only rather than payroll plus HR,” she wrote via email.

Longer term, if Pento can become the infrastructure layer for HR and compensation via its soon-to-be-rolled-out open API, Lerner added, the company would become further embedded into its customers’ payroll and HR workflows.

“It could then leverage its strategic positioning of managing payroll for its customers and being in the critical flow of payroll payments to monetize a suite of ‘Pento for Employee’ products including financial offerings such as lending, KYC, and more,” she said.

PayFit raises $107 million for its payroll and HR platform