The app economy will again set new records in 2021. According to a review of the global app ecosystem in 2021 by Sensor Tower, released today, first-time app installs grew to 143.6 billion during the year, a half percentage point higher than 2020, but consumer spending in apps is up a much larger 19.7% year over year to reach $133 billion. This includes spending on in-app purchases, premium apps and subscriptions across both the Apple App Store and Google Play, but excludes third-party app stores, like those in China. 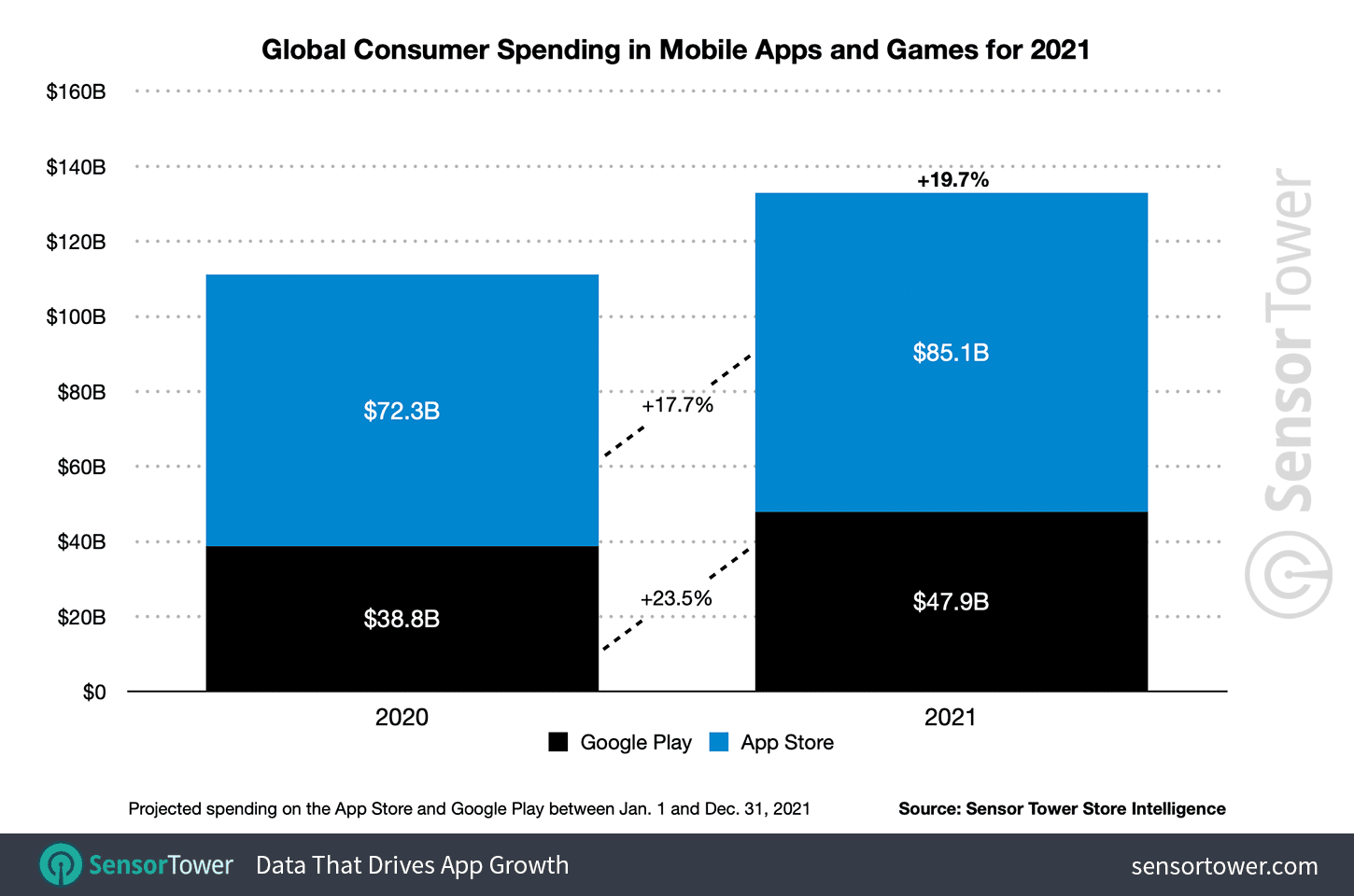 This growth is nearly in line with the growth seen in 2020 when consumer spending jumped 21% to reach $111.1 billion, Sensor Tower noted.

That the growth continued along the same lines this year is notable because, of course, 2020 had seen the world grappling with the immediate impacts of the COVID-19 pandemic that forced consumers to work from home, shop online, virtually connect with friends, stream more entertainment content and attend classes online, amid other behavioral shifts. These changes had played out in terms of consumer app usage and spending in 2020. Global app revenue had rocketed to $50 billion during the first half of 2020, in part due to how the pandemic was impacting the world of mobile apps, TechCrunch had reported at the time. 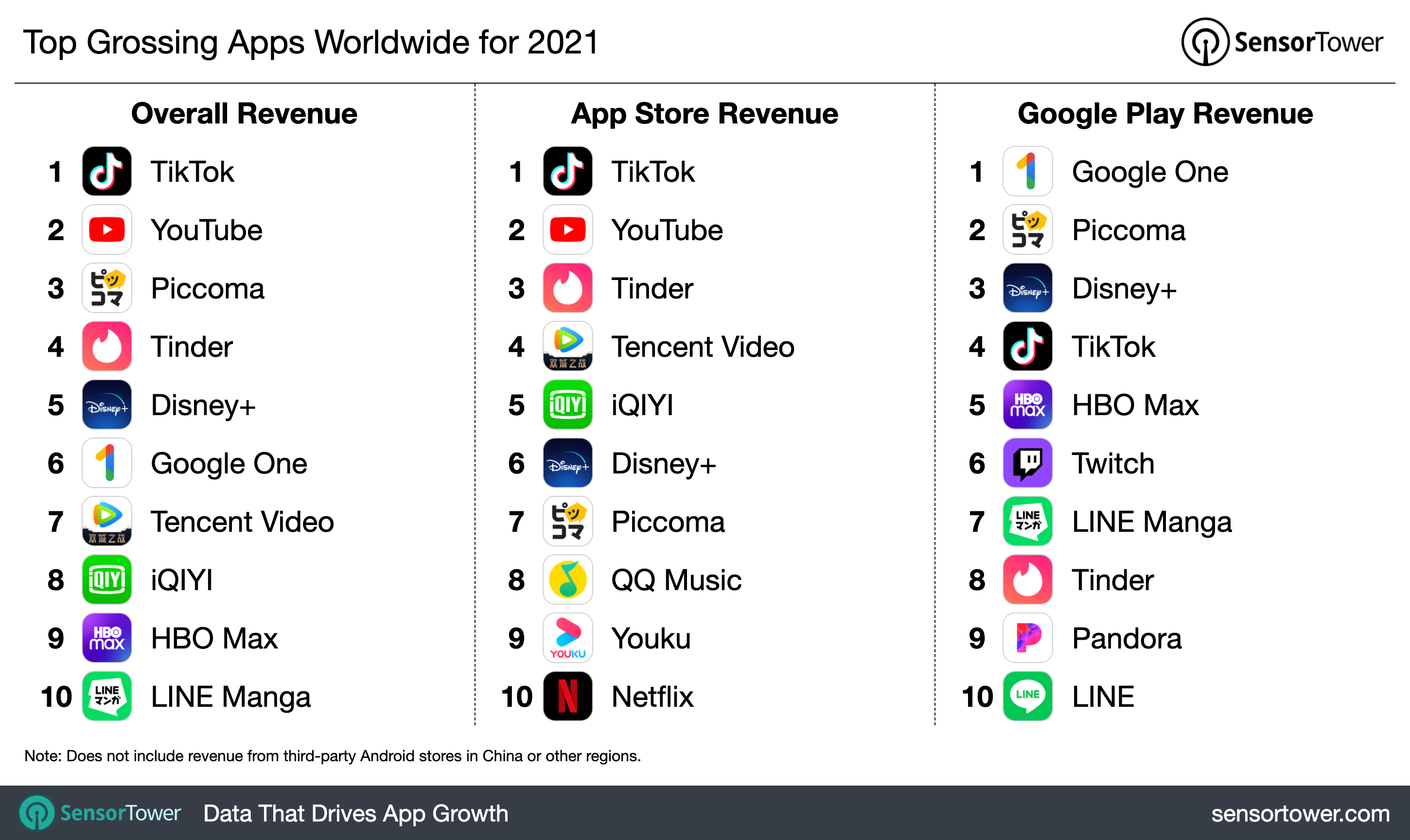 There were some early signals that these pandemic-driven shifts in consumer spending would outlast the COVID-19 government lockdowns seen in 2020 to continue to impact 2021 mobile trends. In the U.S., for example, consumer spending on iPhone apps was on track to reach an average of $180 in 2021, up from $136 last year, the firm had also said. It ended up at $165, we’re told, however. And consumer spending during the first half of 2021 was already hitting new records, with a global total of $64.9 billion.

Outside of games, the app to pull in the most global revenue in 2021 was TikTok, including its Chinese counterpart, Douyin. Combined, the different iterations of ByteDance’s short-form video app passed $2 billion in revenue during the first 11 months of 2021 and is on track to reach $2.3 billion by year-end. That will bring its lifetime total to $3.8 billion. 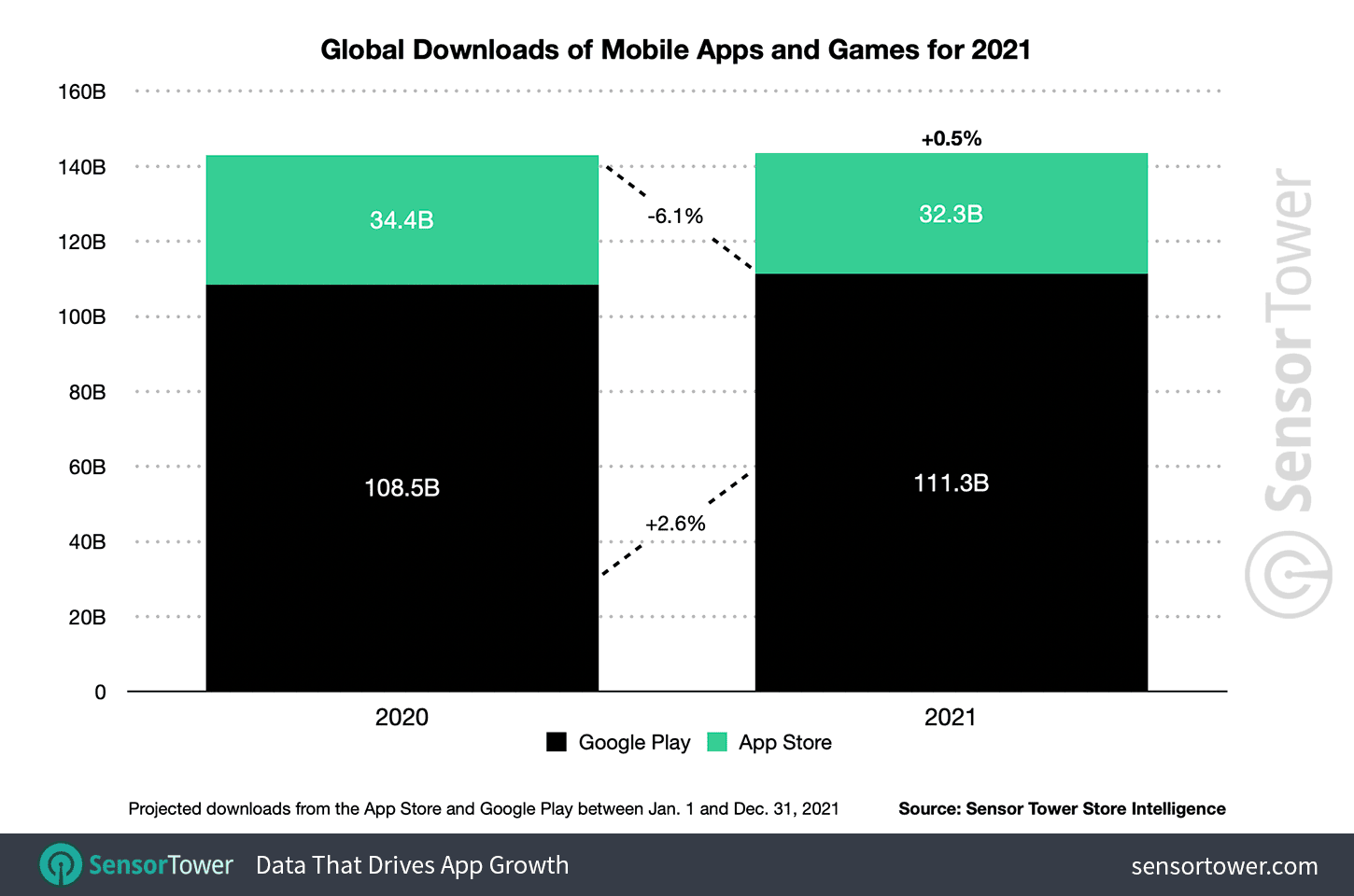 But Apple’s App Store saw new app installs drop. This year, downloads will have declined 6.1% from 34.4 billion in 2020 to 32.3 billion, Sensor Tower estimates.

TikTok remained the most-downloaded app with 745.9 million global installs, despite a drop from the 980.7 million installs it saw in 2020. (Apple had also recently confirmed TikTok was the top U.S. download of the year on its Free iPhone Apps chart, for what it’s worth.) On Google Play, Facebook topped the charts with 500.9 million installs, demonstrating the social networking app’s ability to gain traction in a number of emerging markets where Android is more popular. But across both app stores, Facebook will see 624.9 million installs in 2021, down 12% year over year from 707.8 million in 2020. 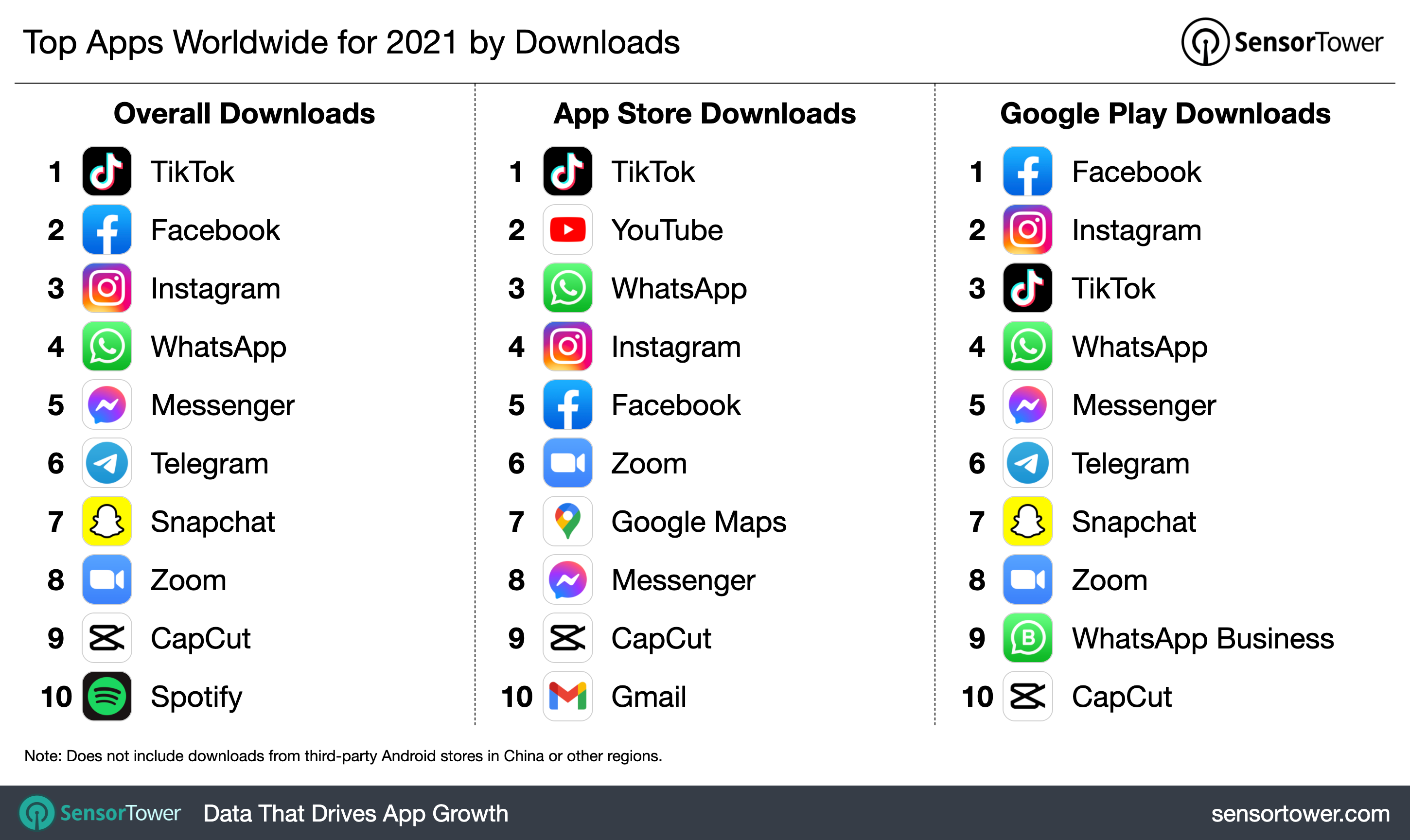 Mobile games continue to pull in the lions’ share of global app revenue, as in previous years. In 2021, mobile game spending will reach $89.6 billion across the App Store and Google Play, up 12.6% year over year from the $79.6 billion spent in 2020.

But in an ongoing trend, gaming’s slice of the overall pie is shrinking. In 2019, games accounted for 74.1% of all app spending, which dropped to 71.7% in 2020. This year, they’ve fallen again, representing just 67.4% of all in-app spending. This shift is due to the rise of subscription-based apps outside of games, and this year, particularly the growth in streaming and Entertainment apps, which have financially benefitted from the pandemic. 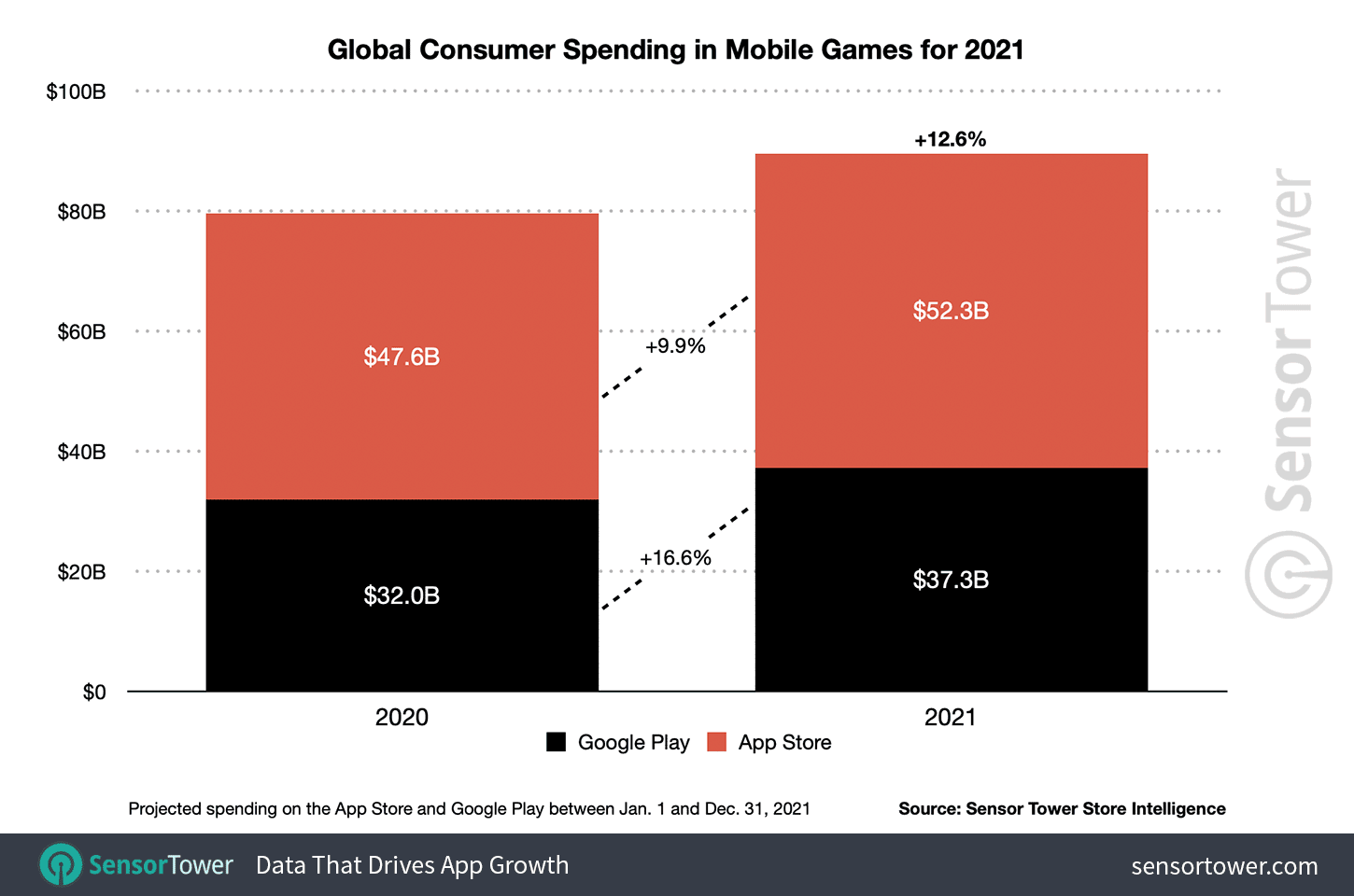 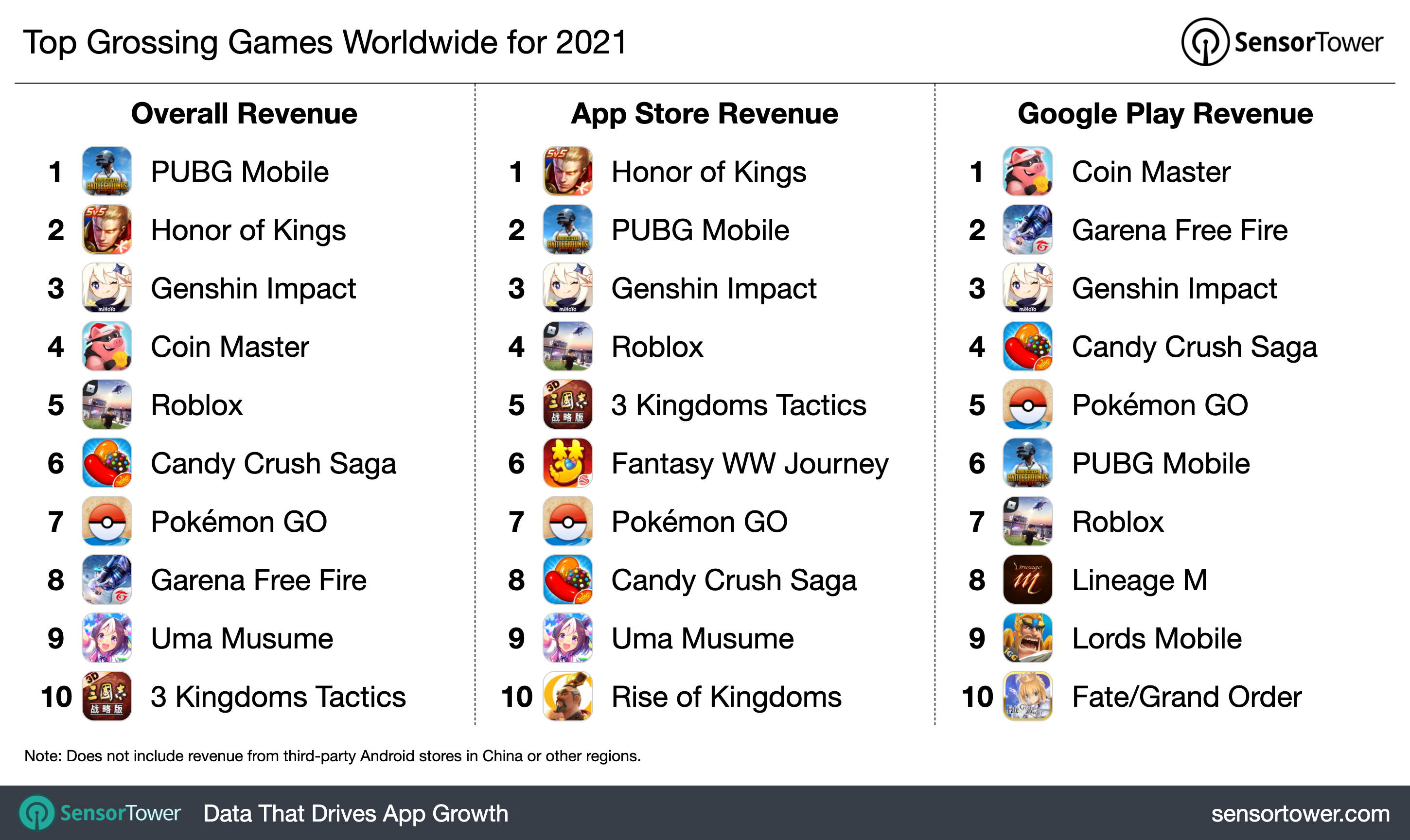 Game installs, like the rest of mobile app installs, declined year over year on the App Store, going from 10.1 billion in 2020 to 8.6 billion this year. PUBG Mobile, including the Chinese version Game of Peace, grabbed the most downloads (47.5 million). On Google Play, game installs grew 1.3% from 46.1 billion last year to 46.7 billion this year, with Garena Free Fire pulling in the most downloads (218.8 million).

To some extent, this year’s trends saw a bit of normalization after an unusual burst of activity in 2020. But other trends have remained the same — like the shrinking slice of consumer spend attributed to games, for instance, or how Android continually beats iOS on downloads but not on revenue.