The killer app of any tech is to make your life easier and more comfortable; the GPS in your car helps you find the best route to a restaurant when traffic is backed up, if you have cruise control, you can set a speed on the highway to ensure that you don’t get a ticket. These vehicle features are modern-day must-haves, yet because these complex systems are so instrumental to our daily lives, we only think about them when they’re not working or, in the case of the Rebelle Rally, blocked for competition.

Competitors in the Rebelle Rally — the annual off-road navigational competition for women — got to play test engineer for eight days, an experience that provided a deep understanding of what automotive-grade really means, all while competing to find hidden checkpoints in the desert for points.

Running a high-tech product at or near its limit in a tech-adverse environment is one way that auto manufacturers test vehicles during pre-production. Car manufacturers travel all over the world to places with extreme weather and temperatures to test vehicles to ensure that the vehicle in your driveway can withstand everything from subzero temperatures, snow, mud and rain to intense heat, sand and wind, all while running at or near the limit.

Yet, it’s a part of the process that very few even consider — that is until you’re in the middle of a sandstorm or navigating across a desert, both of which I faced while behind the wheel of a 2020 Porsche Cayenne S. That experience showed just how robust automotive-grade is and gave me a tiny taste of the kind of testing that these vehicles go through before they’re put into the hands of consumers.

Competing in the extreme

The Rebelle Rally is part geocaching and part off-roading competition that takes place in a variety of settings across the western desert in the United States each October. It was created by veteran rally driver and navigator, Emily Miller and 2021 marks its sixth year. Miller has said that she started the rally specifically for stock vehicles — or those that have not been modified to tackle rugged off-road terrain as a way for women to really test the limits of the vehicle in their driveway.

Each day of the competition, 52 teams set out to find hidden geofenced checkpoints littered across the landscape using nothing more than paper maps, handheld compasses and map rulers to locate them. Some checkpoints have visible flags, while others have no marker whatsoever, and each checkpoint has a specific open and closing time.

Competitors use a hand-held GPS locator, an Iridium Yellowbrick tracking device, to check in at each checkpoint and earn points that are based on a variety of factors, including location, level of off-road driving difficulty and accuracy or how close they get to the correct geofenced point. At the end of the competition, the team with the most points takes the podium. 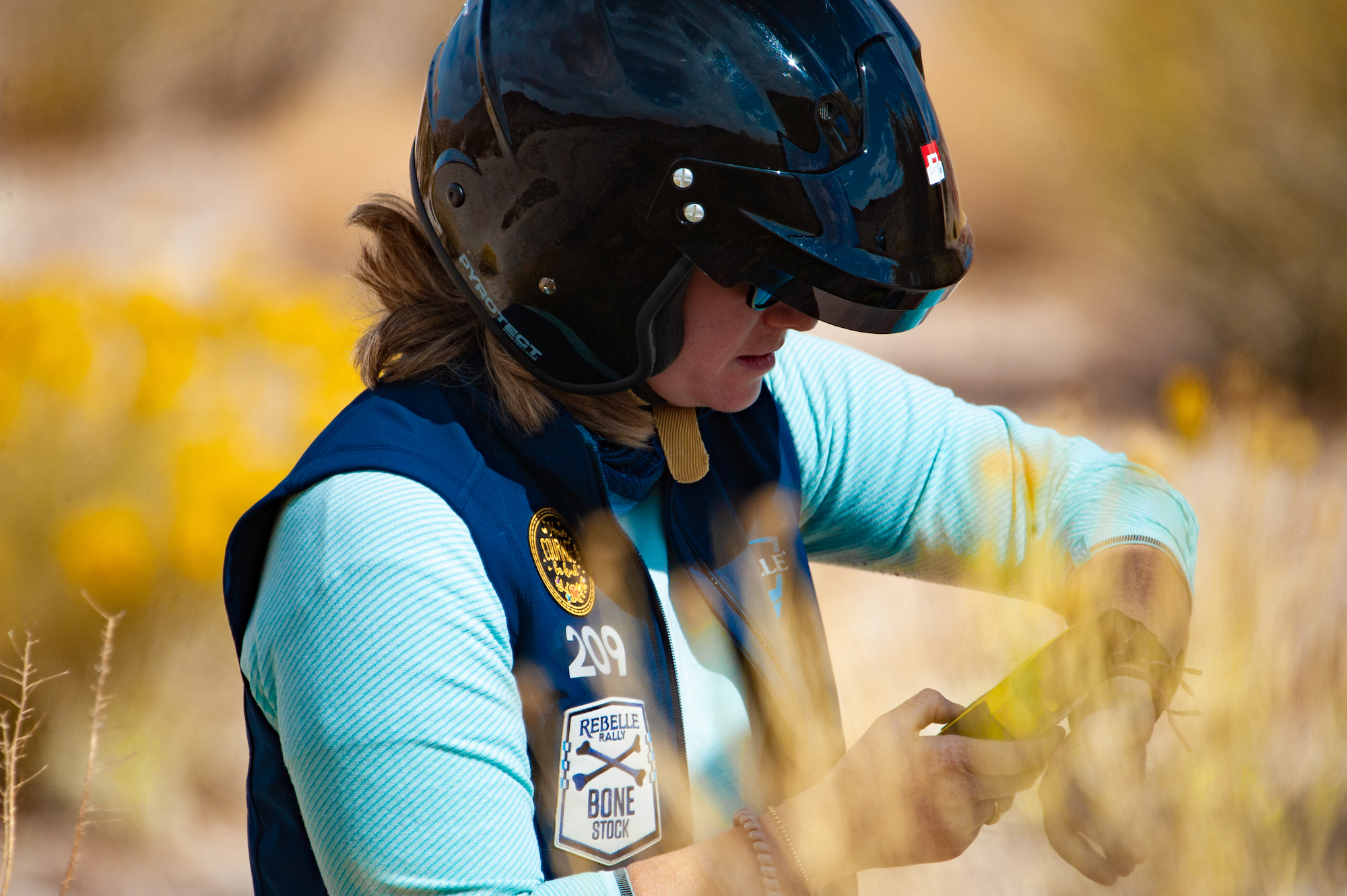 This year the competition covered more than 1,500 miles of off-road trails in California, Arizona and Nevada, and manufacturers like Porsche, Rivian, Volkswagen, Jeep, Nissan and Toyota often put teams of women into OEM-owned vehicles to show just how capable their crossovers, SUVs and trucks are. This year, eleven manufacturer-sponsored teams competed.

The competition was a first for me and Porsche North America.

According to Miller, the rally is “designed as a proving ground. We have some [companies] that have engineers participating so they can literally live and compete in the vehicles they design, some that see it as an authentic, hard-core test drive for journalists, employee development, customer opportunities and incentives. And the content collected comes from some of the most scenic landscapes anywhere.”

When sand and modern vehicles meet 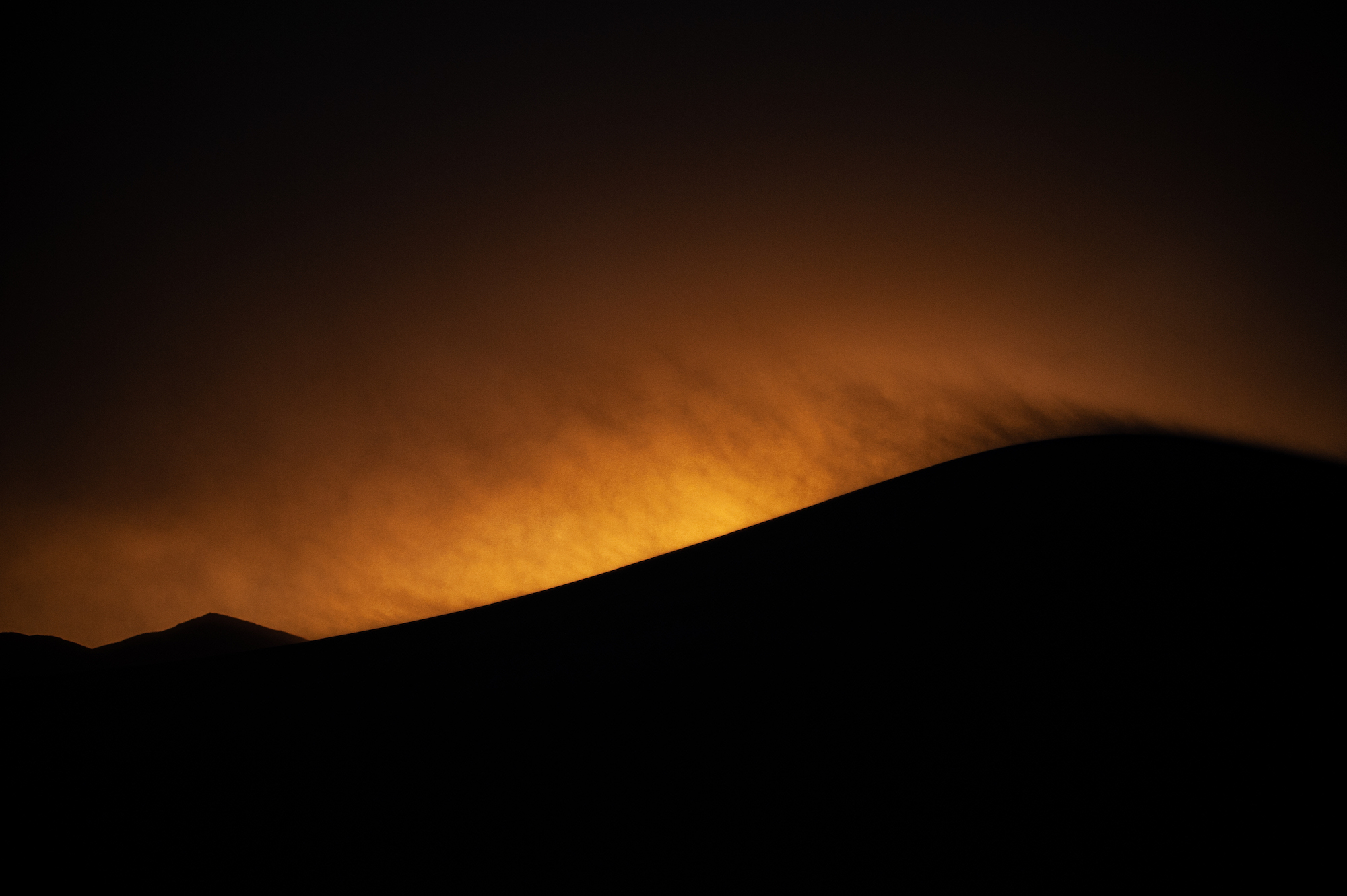 This year’s event posed a more difficult challenge than in years past as a result of the weather.

We endured extremes that ranged from lows in the 30s with rain, snow and sleet to a tremendous sandstorm that lasted 24 hours at Big Dune, near Beatty, Nevada. Overnight, during that storm, gusts reached upward of 60 mph, created total whiteout conditions and forced most of the competitors, including my teammate Beth Bowman and I, to sleep in our vehicles as a safety precaution.

The wind and blowing sand shredded and destroyed tents and caused an extremely unsafe condition for the fuel truck, which normally provides the 50-plus competitors with fuel each night.

Those are just the kind of weather conditions that people like Ralf Bosch, the director of Cayenne testing at Porsche, celebrate when testing a vehicle. “Sand is a terrible torture for a modern vehicle. There’s lots of cooling, clutches and drive shafts that have to be specially designed so that they don’t break down in the dunes,” Bosch said.

Bosch and his team travel all over the world — from Finland to Africa — to test prototype Cayennes, both combustion and hybrid-powered, in extreme weather.

“We look for extreme cold, for extreme wet and drizzly and salty weather, extreme temperatures with mud and snow, to be sure that these conditions don’t affect the car too much,” he said. “We drive the vehicles for days in sand storms, and then we pack them in snow and ice and cold until everything is frozen and aim to have no fault indications.”

While it’s highly unlikely that an owner will ever take their Cayenne to the wilds of Yellowknife in Canada, a popular and extreme winter testing site for auto manufacturers, this kind of rigorous testing is a regular practice in the industry. This testing helps carmakers ensure that the technology, both inside and out, is automotive grade. That means that everything from the GPS in your vehicle, the auto/stop-start system, to the engine or motor, will run in all kinds of conditions — especially at the extremes — without breaking down or failing completely.

The tech: A double-edged sword 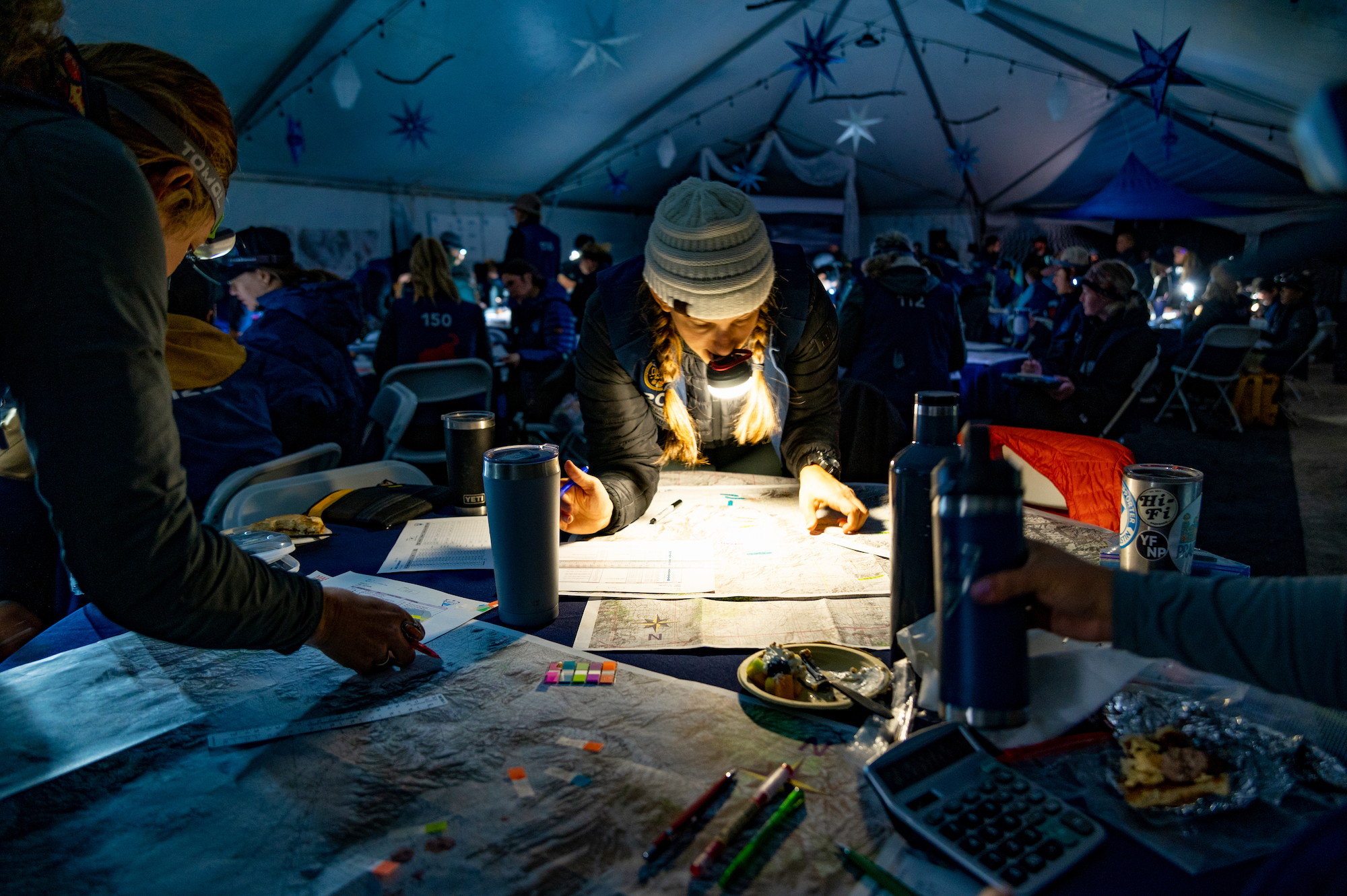 The Rebelle Rally poses unique challenges for modern vehicles, especially as they become even more tech-laden. Since GPS and digital compasses are not allowed in the Rebelle, our Cayenne S, which we nicknamed Ruby after its scarlet interior, went through an extensive process shepherded by Porsche to ensure that the navigation system was totally confused and showed the incorrect data in order to meet the rules and regulations of the competition.

“In order to disable the GPS capabilities on the Cayenne S, we removed all antennas (GPS, GSM and WiFi), and additionally programmed the PCM to only search for non-U.S. satellites so it would not connect to our U.S. based satellite network,” Kyle Milliken, the Porsche press fleet technician who worked the system, said.

That meant that the entire time we were driving in remote areas of the desert, the system thought we were somewhere in the Pacific Ocean, and its digital compass was completely useless.

Like most modern vehicles, our Cayenne S had one single screen that controlled everything from climate to ride height and traction. Those last two features are absolutely crucial when taking on any challenging off-road trail in an all-wheel-drive vehicle, as you need to be able to actively manage and control ride height and power distribution. Had Porsche not adequately confused the GPS, the Rally would have physically blocked our access to that screen, rendering us unable to do much more than put the car in drive, reverse, park and neutral. 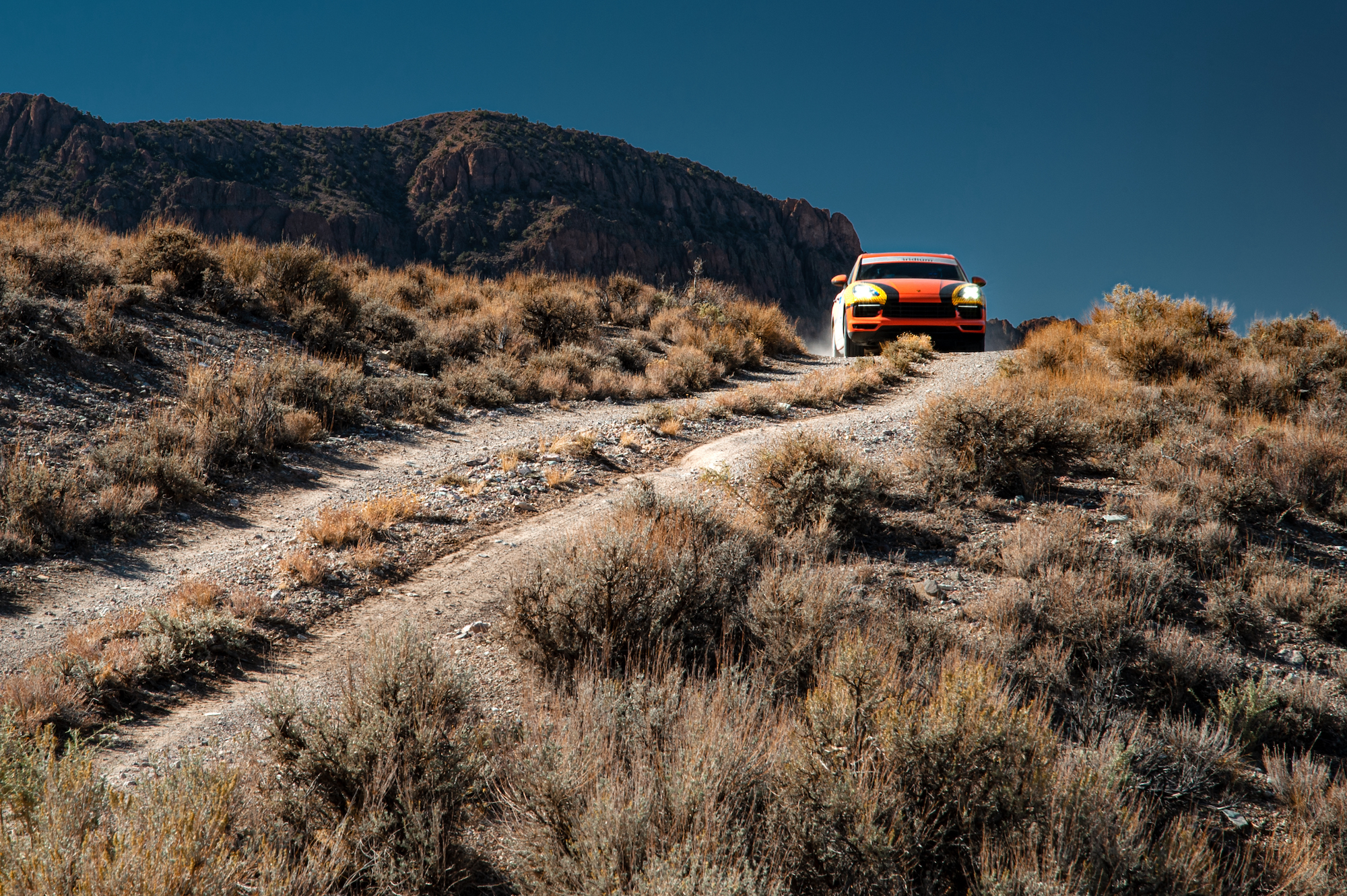 Unlike the first-generation Cayenne, which has a rightful reputation as an off-road beast (as it had a robust chassis and came complete with locking differentials and a transfer case accessed through physical buttons), a modern Cayenne’s off-road features and programs can only be accessed through the main center console screen.

In addition to this, you must be able to access the screen (and its menus) to change a tire on a modern Cayenne S outfitted with air suspension, as Ruby was. You have to turn off the auto-leveling feature that makes the Cayenne comfortable on-road and off to jack the car up. Had the Rally blocked our screen because of the GPS, we’d have had a far more difficult time competing.

Some of the very good off-road settings that come with the air suspension on the Cayenne S (my favorites were Sand and Rocks with the chassis height on Terrain) got a little too smart during our version of torture testing.

While training in the Oceano dunes in late August, Beth and I struggled to get intentionally stuck in the soft sand so we could practice the self-rescue skills we would need in the Rally. The traction control system on the Cayenne would override and stop the wheel spin when I gunned it to dig us in on that training. Luckily, during the Rally itself, we never got stuck — nor did I blow a tire or break anything on the vehicle. The Cayenne proved to be so solid that we even rescued another vehicle that got stuck in the Glamis dunes.

All of this is a testament to the robustness of the extreme testing that goes into the development of automotive-grade technology and components, particularly those in the modern Cayenne. Despite a massive sandstorm (plus two more small ones that pelted us over the eight-day stint), extremely harsh environments and tricky driving, the Cayenne S performed just as expected every single day.

Each morning, Ruby purred to life, kept us comfortable and warm (or cool) and never threw a single fault. We never had to blow out the air filter or brakes and drove straight from the eerie Glamis dunes onto the highway and back to the chaos of Los Angeles, doing nothing more than adding air back to the 20-inch tires we ran on.

That’s precisely what “automotive grade” testing is designed to do — keep you on the road no matter what kind of weather or environment you’re facing.

“If it’s so good on the road, you think that it can’t be that good in such a sandy and dirty condition,” Bosch said. “We try to keep the off-road performance by improving the on-road performance in the Cayenne and it’s a very capable vehicle.”