Vijay Menon, a statistician by trade, began his career at Microsoft.

It was there that he realized there was an astounding number of subscriptions that failed to renew or even go through to begin with due to payment-related issues. He became intrigued by the problem, and solving it. Ultimately in 2016 alone, he helped the company recover over 10 million Xbox Live subscriptions, he says, resulting in more than $100 million in recovered revenue.

In his subsequent roles at Dropbox and Scribd, Menon realized the problem of accidental payment churn was not exclusive to Microsoft. It was a challenge that plagued all B2B subscription and SaaS businesses.

“Every subscription company deals with this black hole,” he said.

Payment failure, in fact, is the among the biggest causes of customer churn and represents nearly half of all subscription churn. Even more alarming, Menon came to understand, the companies weren’t even aware of what was happening.

False declines are estimated to be a $443 billion problem by the end of this year, according to Cardinal Commerce), resulting in millions of lost subscribers.

The accidental churn is often not just due to problems with renewals, where people get frustrated by failed attempts to charge their credit card, for example. It is also largely a problem at the sign-up process, especially in countries outside the U.S., where charges are often falsely declined due to being attempted in another country. To Menon, it was a massive market severely underserved by traditional payment service providers such as Stripe who are strong domestically, but in his view, were poor at clearing international payments in growing markets like Brazil, India and Mexico. Menon estimates that on average, 4% of subscription customers are lost monthly to legitimate payments failing.

Consumers outside the U.S. might be clicking submit on a given transaction, but if they’re using a card form that’s configured for the U.S., they could be getting rejected, and “no one’s really checking on what happens after the user drops off,” Menon said.

So in 2020, he teamed up with venture studio Atomic to found Butter, a startup aimed at helping companies retain existing customers and sign on new ones by preventing this accidental payment churn. Using machine learning, Butter aims to end the churn by preventing drop-off from legitimate payments.

Atomic has launched 14 startups in the last 12 months (and they’re getting funded); here’s how it works

“We focus on two problems that can affect any subscription business, which is basically ‘how do I check out a payment upfront and make sure that payment actually goes through?,’ ” Menon told TechCrunch. “The other part is, what do we do when a payment fails?”

The San Francisco-based startup has raised $7 million, largely from Atomic, to tackle the problem. In a year’s time, it has also signed on about a dozen consumer subscription companies, including some large names (which he declined to reveal publicly), doing $10 million to $500 million in revenue — many of which have an international user base. It claims that it helps these companies find, on average, $1 million of revenue per year.

An economy increasingly reliant on subscription models places new challenges on existing payment systems that are typically out of date, complicated, vary by country and constantly changing based on new fraud rules, according to Menon.

“Even massive companies like Netflix and Spotify who have invested significant internal resources – payments engineering teams – in this problem, struggle because the payment landscape changes so frequently,” Menon told TechCrunch. “The Butter payments intelligence platform was built to scout through obscure payments networks to find what is broken.” 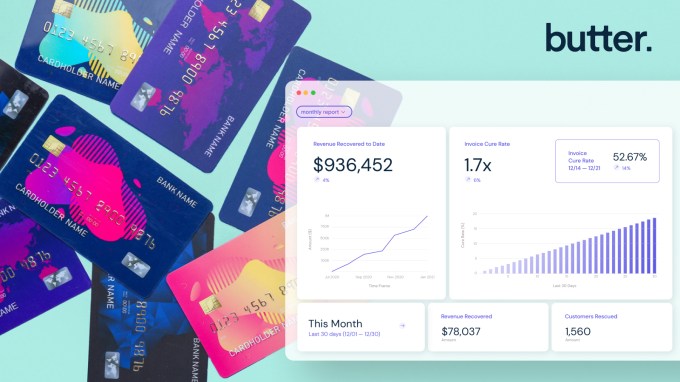 Butter plans to use its new capital to do “top of the funnel optimization,” according to Menon. When a consumer checks out, there are about 128 different data elements that can be presented with every payload, he said.

“We’re investing into the capabilities that will be able to make decisions [around those elements] in real time so that these folks coming in through the funnel will have a much higher likelihood of that payment going through,” he added.

Long term, he said, the company aims to build an AWS, or operating system, for payments.

“We’re trying to build a connective tissue for the entire payments ecosystem. We sit above what we call the payment service providers so we’re not Stripe, we’re not Braintree, we’re sitting above them,” Menon explained. “We want to work with any company, regardless of what your payments stack is.”

It also, naturally, plans to do more hiring. Recently, Bill Hoppin joined the company as a co-founder and COO. Butter expects to have about 50 employees by the end of Q1 2022.

Jack Abraham, CEO and managing partner of Atomic, described Menon as an “exceptional” founder with unique firsthand experience inside the payments systems of some of the largest global consumer subscription businesses.

“We co-founded Butter with Vijay and the team to solve some of the most critical conversion and churn issues that all businesses face, large or small, and a short time in the company is off to an incredible start,” he wrote via-email.