The skyline of the city is a mass of brightly lit office buildings, industrial factories and skyscrapers, the endless hash of lights and shadows making the night seem as if it is teeming with life. Within that urban jungle, we find Amit Gupta, our dastardly hero. He smelled of fresh laundry, hair gel and a faint aroma of peppermint. His suit was a silken blend of powerful cologne and a soft, warm scent of leather and musk. His woolly hat was of a bright hue of burnt ochre. His necktie was of a darker hue of pink. The startup founder’s skin is soft and warm like a newborn baby. He has a strong handshake and a gentle demeanor. His conviction runs deep. The company? Sudowrite. The co-founder? James Yu, who also founded Parse and later sold it to Facebook. The investors? An impressive list of angels. The dollar amount? $3 million.

In the midst of the urban cacophony and an immense symphony of sounds, the sounds of traffic, the sounds of kids playing, the sounds of televisions, of radio, of fire alarms, of police sirens, of mumbling drunks, he received a piece of blood-curdling news. Amit was diagnosed with leukemia, and his life was utterly upended. It was time to take stock, and really examine what was important for him. He took a breath — was he on borrowed time, or was this merely a wake-up call?

Asking Sudowrite to describe what a startup is had me laughing so hard I was gasping for air. Truly, a magical experience. Screenshots: Sudowrite

Gone was the dream of running his existing startup, Photojojo, which was known for its drone rentals, strange photography accessories and creative photo-mounting ideas. He sold it, and ended up spending some time trying to figure out what to do next. The money he got from the sale of his company was no thicker than a thin black leaf, curled like the wings of the devil, thin as paper, thin as smoke, thin as silk; it felt like spider webs.

If the first couple of paragraphs of this article seem weird, that’s because I used the Sudowrite tool to write a bunch of descriptions. It’s hilarious — but also an incredibly powerful tool. Do they make sense? Not always, but that’s not the point — the tool isn’t meant to replace writers completely, but to help summarize or expand, or to spark the creative juices that sometimes are lacking in the writing process. With that in mind — as you can read from the completely bonkers beginnings of this article — it works fantastically well.

“I sold Photojojo in 2014 after being sick and kind of going through some soul searching. I left Silicon Valley completely and did some travel. I did all these things on my bucket list. At some point, it was five years out from the transplant, which meant that like I probably wasn’t going to die of leukemia,” Amit Gupta, founder and CEO of Sudowrite told me. “And then I was like — well, what do I do with my life? I was coaching for a while. And then I ended up writing science fiction for the past several years and getting really into that. It was really fun, and something very new for me, starting all the way at the bottom and clawing my way up.”

In his journey as a science fiction writer, Gupta ran into an issue many writers experience: Writer’s block. It shouldn’t be this hard to write, should it?

“I think Sudowrite solves multiple problems, and I think the specifics are different for every writer. One of the problems I discovered with writing was that it is very solitary. Coming from the startup world where everything is very collaborative. It felt very lonely to be sitting at the keyboard, hitting my head against the desk whenever I got stuck in having no outlet except for my once-a-week reading group which may or may not be able to help. I think our first impulse was, can we create something that acts like a creative partner sitting next to you, so that when you’re stuck you can turn to them and say, ‘I can’t figure this out? This isn’t working, like give me ideas.’ That was the original impulse,” Gupta explains. 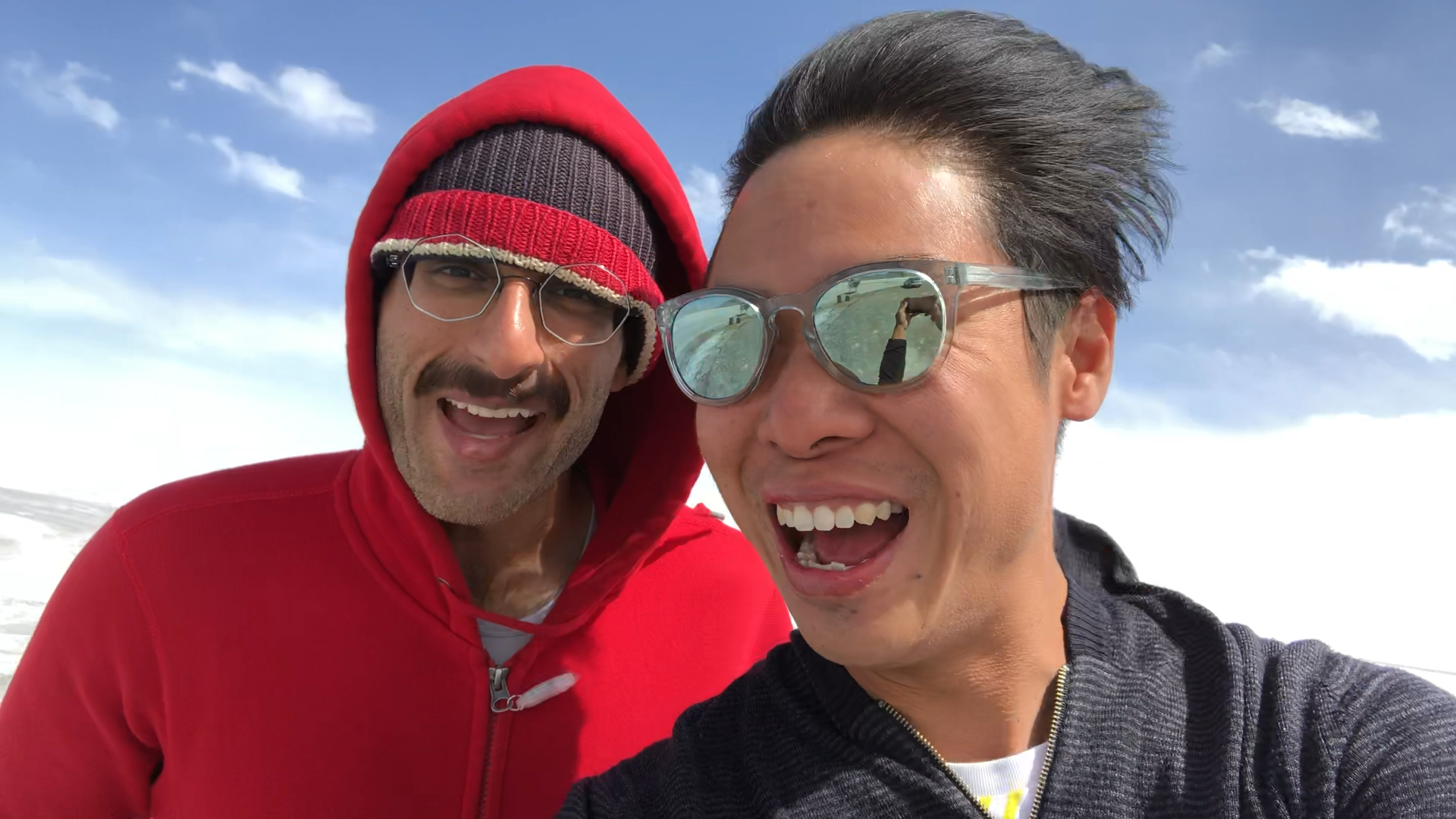 The founders, Amit Gupta and James Yu, are found on the peak of a mountain. They have been known to grow to a size just a little larger than a typical house cat. A hodgepodge of human skeletons lay huddled together in the dirt, their eye sockets staring blankly at the sky, nestled in a pile that looks more like a rubbish heap than a grave. The founders gather their wits, shaking the muck from their clogs and steeling themselves for battle. They can hear the dragon breathing down on them. Photo – and image caption – by Sudowrite. We did not fact-check the caption for accuracy.

“We wanted to give you someone who’s almost as good as a human reading partner, to bounce ideas off of. Beyond that, I think as we talked to users, especially people in the entertainment industry such as screenwriters, we discovered there was a specific need. They have a lot of rote tasks that they don’t like doing: they might have a screenplay they’ve written and they might need to generate a one-page treatment, a three-page treatment, etc. It’s all very specific industry stuff, but it’s pretty easy for an AI to do. It’s not very creative work, and a tool like Sudowrite saves them hours and hours of the worst kind of work that they have to do. I think there’s a lot of opportunities like that, but the core product is really about inspiration provocation, helping you stay in flow.”

Inviting Sudowrite to get creative with one of the lines in this article shows how an AI can take a simple sentence and wrestle it into a few different shapes — more description, more inner conflict, or (my least favorite of all time), brevity. Screenshots from the Sudowrite app.

Gupta was trying to fight off the loneliness of writers with a Sci-Fi writing group, where he met his co-founder, ex-Parse founder James Yu. Together they built an early version of the app built on GPT-3, started getting some paid customers, and decided to raise some funds.

“We started thinking we’d raise about $1 million just to get this off the ground. We ended up raising $3 million, almost entirely from individual investors. That was by design: We wanted to have people who were willing to allow us to experiment at our own pace and try some like weird stuff, without the pressure of doing the startup / VC treadmill,” explains Gupta.

The company currently has between 300 and 400 users, paying around $20 per month for the platform. The fundraising round enabled the founding team to extend the team a little.

“The primary thing this fundraise unlocks for us is to be able to hire. We hired our first machine learning person, our first developer and a lead designer. Those are the first three roles we just closed, and we’ll probably keep the team at that size for a while as we hit our stride,” explains Gupta. “Our users all came from word of mouth, and cover a wide range. We have people who are writing novels or screenplays. Some of our users are creating Substack newsletters. We have users who write for their occupation. But we have some unusual use cases too: A rabbi who uses Sudowrite to make parables, and someone who uses the tool to write meditations. We also have users who create roleplaying games. We have a very broad appeal,”

Sudowrite was in closed beta until today – now, you can sign up for the beta yourself to give it a whirl.

Below, I’m embedding a video demo Gupta recorded. It’s a few months old, but it gives a bit more of an idea what the tool is and how it works.