Before we get started, two quick notes. We’re launching Actuator as a newsletter in a few short weeks! Make sure you’re in on the ground floor by signing up (for free!) over here. Also, the powers that be helpfully noted that I’ve not taken any days off this year, so I’ll be doing that next week. That means, among other things, attempting to sleep in until 7AM, a couple of museum visits and no newsletter on Thanksgiving. See you in December!

Last week, Carnegie Mellon announced that it had appointed Matthew Johnson-Roberson the sixth director of its Robotics Institute. We’ve spoken to Johnson-Roberson a number of times in the last few years, primarily in his capacity as Refraction AI’s co-founder and CTO. When I sat down with him again last week to discuss his new role, he called me from the University of Michigan’s Ford-funded robotics wing, where he served as co-director.

It’s a smart hire for a number of reasons — not the least of which is the CMU grad’s experience in both founding a startup and working as part of a corporate-university alliance. We’ve devoted a lot of words to Pittsburgh and CMU on this site over the past few years, and the consensus is that the former has been doing a better job incubating startups, but things could always improve. 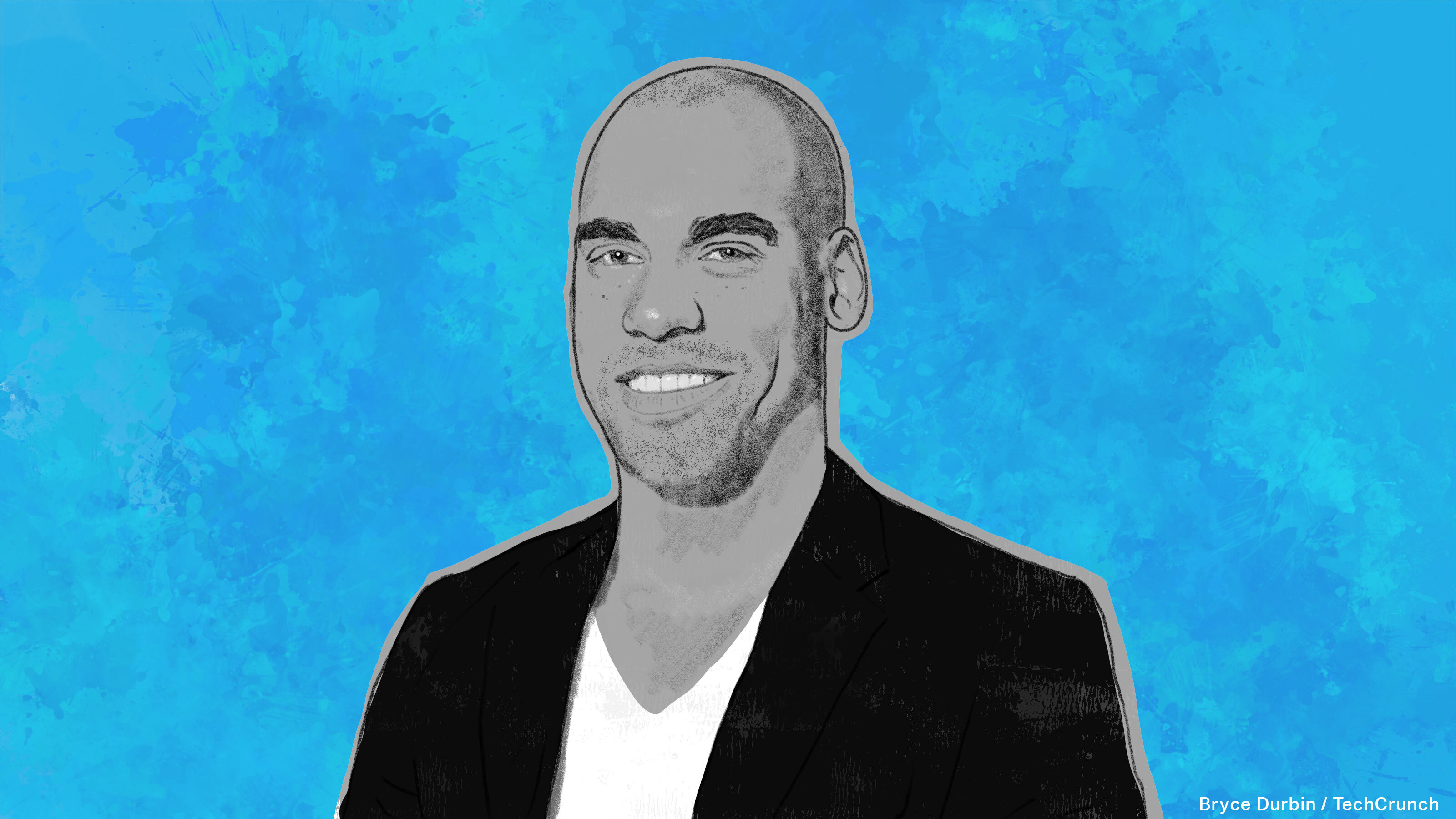 Pittsburgh is quite possibly the strongest example of how a vibrant startup scene can revitalize a region suffering from economic depression. There are, of course, broader economic issues around potentially leaving residents behind through gentrification, but on the whole, Pittsburgh has largely been regarded as a success story, bouncing back from the rust belt region’s economic devastation.

It’s clearly something U of M is focused on for the Ann Arbor/Detroit regions. And Ford’s model will likely prove an increasingly popular one, as corporations look to research facilities for bleeding-edge technologies, while universities look for funding beyond the traditional endowment model (something which, granted, has worked for a university named for two of America’s most powerful industrialists).

So many of the technologies that were developed in the 90s and 00s are now reaching a level of maturity where they are getting rolled out in commercial products and making a big difference to the future of a lot of industries. I think it’s a natural extension of that. You begin to see relationships between universities and companies. Even if you look at Pittsburgh as a city, the transformation that it’s undergone from heavy industry focused around natural resources and steel, that transformation is only going to accelerate.

Part of my goal is to continue relations and build new ones. Beyond just industries, thinking about government and policy and all the other things that are now going to become more relevant for robotics — making sure we make those relationships and build on the strengths of the technical work that already goes on at the institute. That is something I’m particularly excited about.

Part of me is hoping the robotics news slows down a bit next week, if only for my nagging FONB (fear of not blogging) while I’m out. It’s not healthy, I know. But there are worse addictions (maybe?). I get the sense things will slow down a bit for American Thanksgiving week, if only because it seems like everyone is rushing to get their news out this week. There’s a LOT to crawl through here. 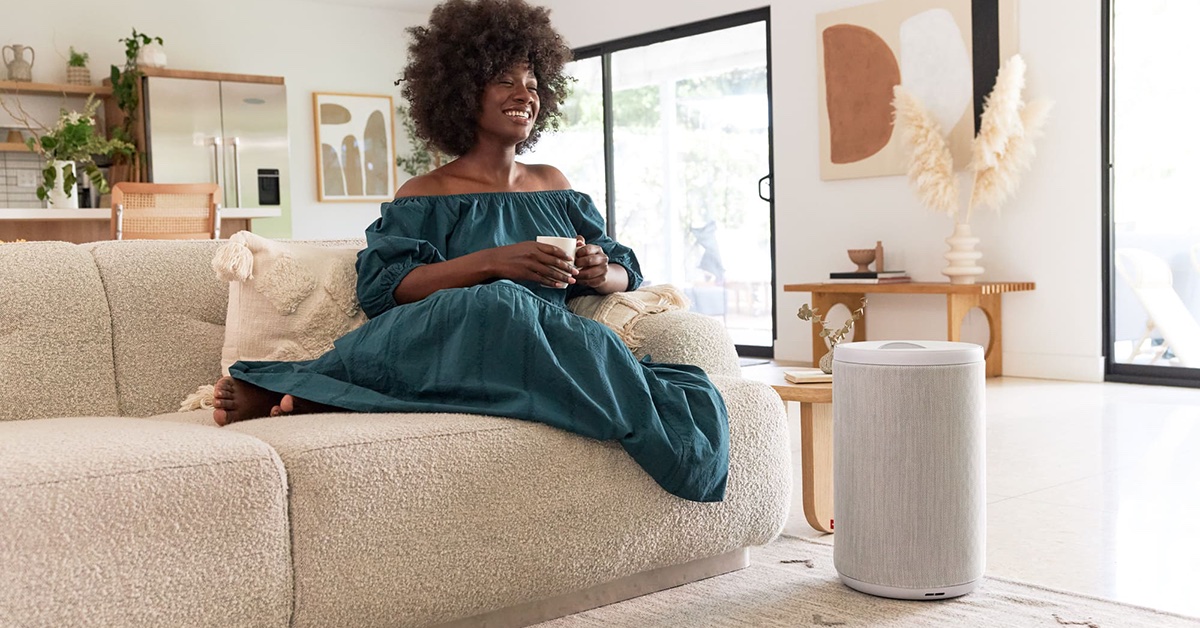 Let’s start with a pair of acquisitions. As we noted in this column last week, iRobot has been getting aggressive about smart home. That’s largely meant things like Amazon Alexa integration up to now, but today’s news marks an interesting new angle. The Roomba maker purchased a Swiss company that makes air purifiers — a move it believes can improve its footprint in users’ homes.

Today’s acquisition of Aeris is an important step in iRobot’s strategy to expand our total addressable market and diversify our product portfolio in ways that will provide consumers with new ways to keep their homes cleaner and healthier. We are enthusiastic about the growth potential for Aeris’ products, especially as the pandemic has raised greater consumer awareness of the value of maintaining a cleaner, healthier home. We are also excited about the potential to leverage our Genius Home Intelligence platform and existing ecosystem of home robots to bring the iRobot experience to air purification.

As we noted last week, most of iRobot’s biggest non-Roomba successes have come in the form of acquisitions of brands like Braava and Root. So hopefully this will open up some interesting avenues, in terms of having devices that can double as smart home beacons and improve home mapping. 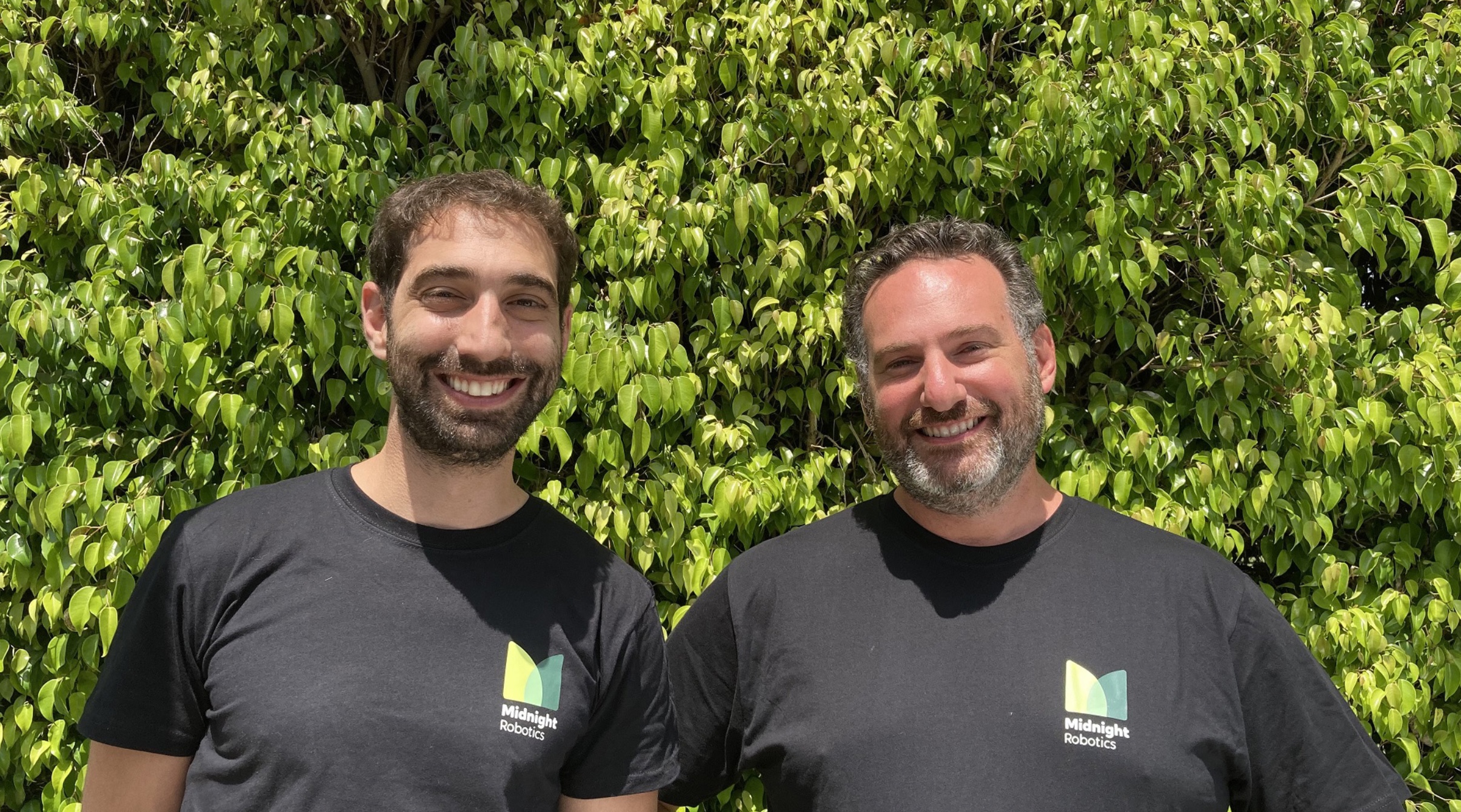 In the agtech space, Fieldin has acquired Midnight Robotics. It’s a deal that makes a lot of sense. Fieldin makes technology that allows farms to collect data for accelerating automation, while Midnight’s tech retrofits tractors and other farming machinery with lidar-based sensors.

Over the past eight years we’ve digitized hundreds of farms and over 10,000 tractors and pieces of farming equipment — more than anyone else in the high-value crop world — and amassed a trove of invaluable data that can offer insights into best practices in farm management. By acquiring Midnight Robotics, we’re helping farmers close the loop from insight to autonomous action, so they know exactly what they need to do and execute it autonomously, all through the same platform.

Monarch’s tractor, meanwhile, is more of an all-in-one solution. The company just announced a $61 million Series B. Like Fieldin, the company cites pandemic-related job shortages as a driving force in interest around its technology. 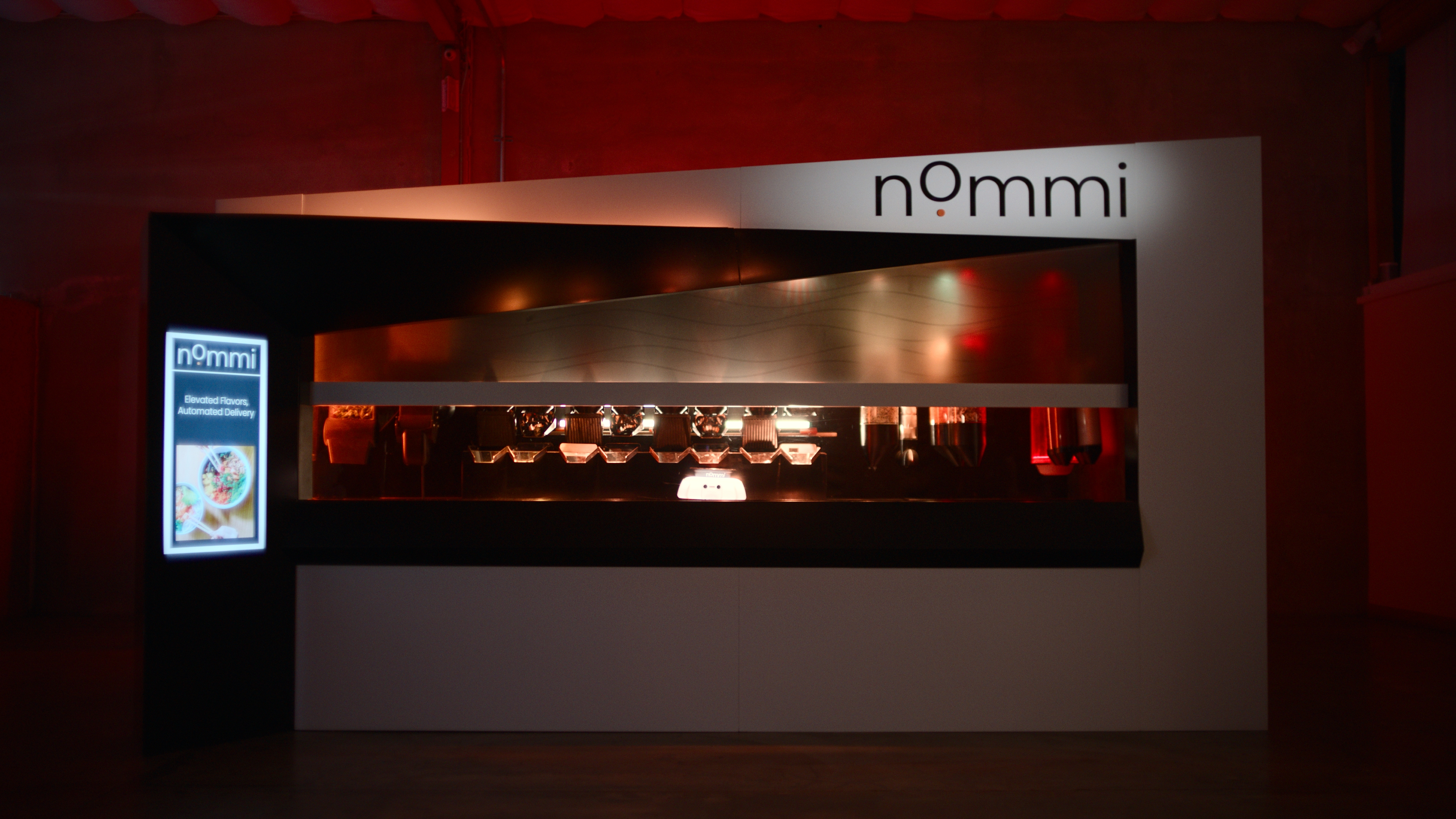 From fields to the dinner table, Nommi just announced a distribution deal with C3 (Creating Culinary Communities) that is set to bring up to 1,000 of its robotic food prep kiosks to locations across the country. The deal also brings Iron Chef’s Masaharu Morimoto’s Sa’Moto brand to the machines, which can operate 24/7, unlike even the ironest of human chefs. 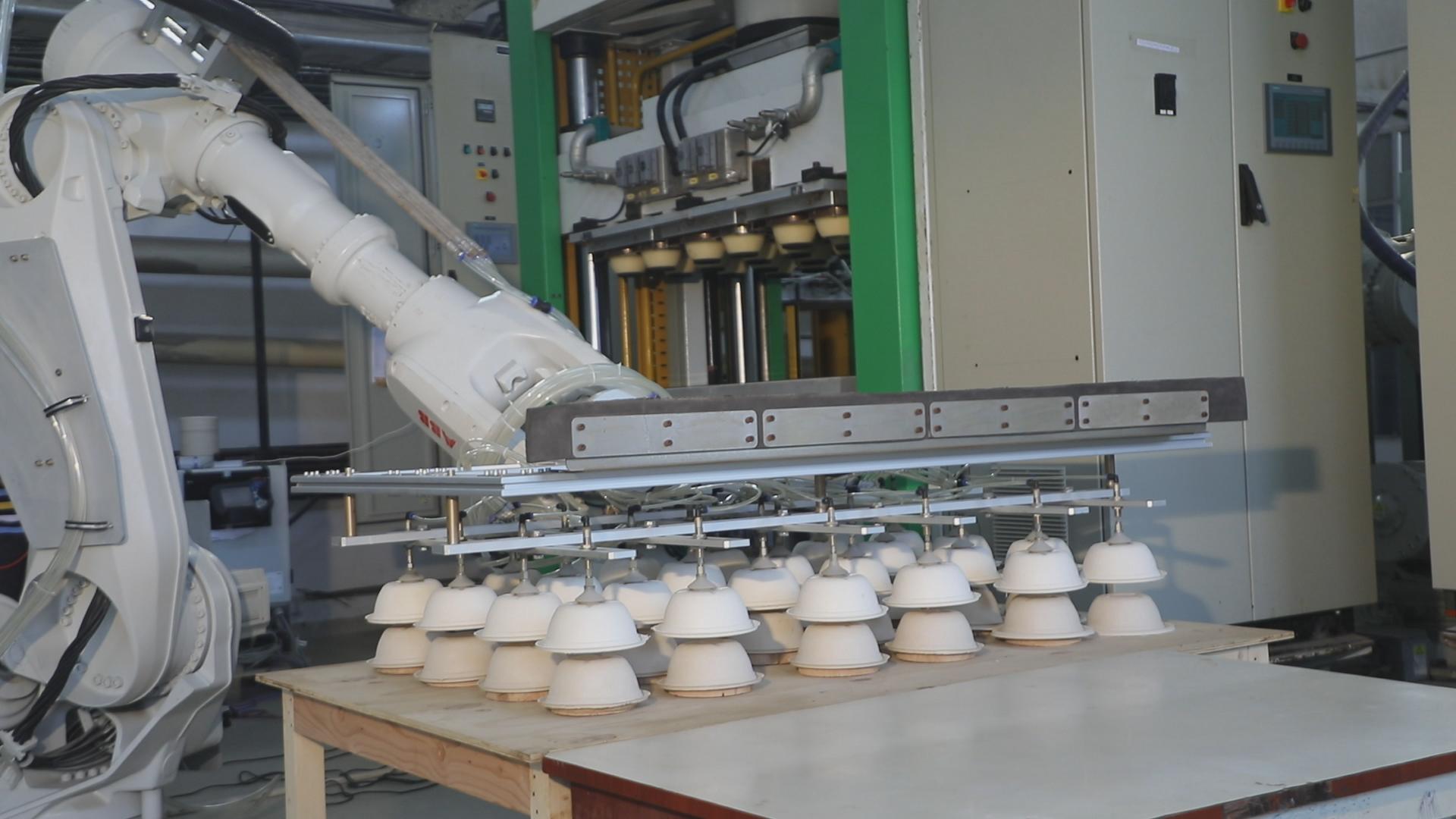 The robot is partially made of plastic, but teams up with Zume to reduce plastics. Excellent work, Judas. Photo: ABB

As hot as robotics are becoming in food, however, there’s probably an even brighter future in sustainable packaging — because, let’s face it, whatever direction we’re currently headed in isn’t great. In one of the wilder pivots in recent memory, Zume moved from pizza robots to bio-degradable packaging. The company is, however, returning to robotics (in a sense) courtesy of a new deal with industrial giant ABB to produce its food packaging.

And one final Tiger Global investment before I leave you (it wouldn’t be a robotics roundup without it). The firm just led a $25 million Series A for SVT Robotics. The Virginia-based company is working to develop a “plug-and-play” solution for industrial robotic deployment. Here’s co-founder and CEO A.K. Schultz:

The demand for industrial automation is even higher, but industry growth has been limited by capacity to execute. Integrations are typically all custom coded, meaning long development cycles. It’s expensive, and companies wait as much as a year or more for new automation to go live. Solving that problem with the SOFTBOT Platform empowers the market to grow at its full potential.

That’s it for me this week. Happy Turkey Day to those who celebrate. And don’t forget to sign up for Actuator here.