Biliti Electric, a startup founded less than a year ago, wants its electric tuk tuks to become a common sight in densely packed cities in the United States.

The three-wheeled, open-cabin, all-electric delivery vehicles known as the GMW Taskman are already being used in Asia and Europe, Biliti founder and CEO, Rahul Gayam said during a press conference Wednesday at the LA Auto Show. The vehicles, which are manufactured by GMW Electric in India and exported to Europe, Japan and other markets, have already made more than 12 million deliveries over 20 million miles, according to Gayam. The company has sold around 1,400 Taskman vehicles to date.

Now, the company is aiming to break into the U.S. market.

The vehicle, which made its North American debut at the LA Auto Show, is meant to be a functional electric delivery vehicle that’s easy to charge and has plenty of cargo space despite its smaller size.

The GMW Taskman, which costs $8,000, looks just like a tuk tuk or auto rickshaw you see in other parts of the world and it’s designed to be used as a fleet vehicle that tackles the last-mile delivery challenges that large Amazon, UPS and FedEx vans and trucks sometimes struggle with in densely populated cities like New York, Los Angeles and San Francisco. 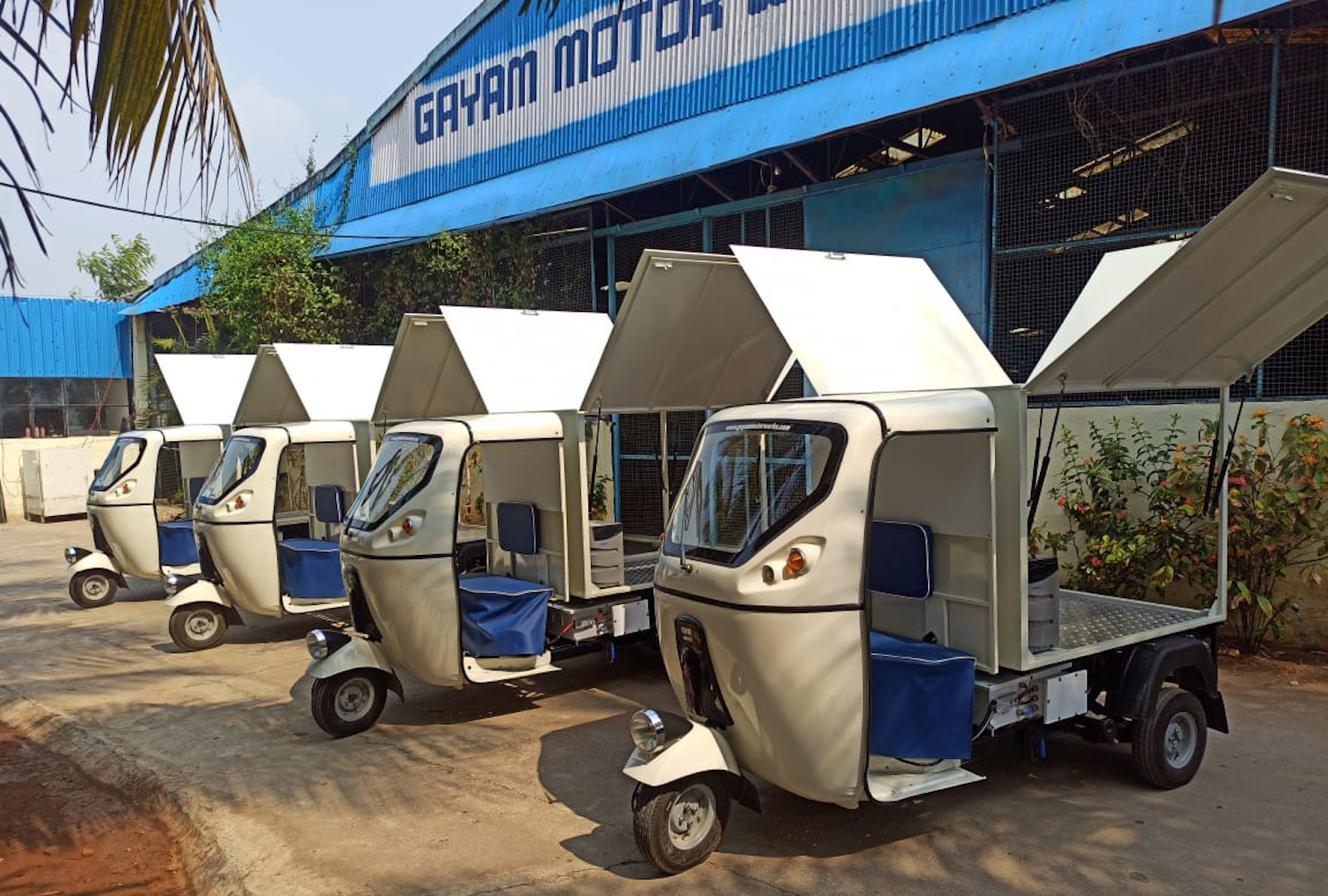 The Taskman can travel up to 110 miles on a single charge, can hold up to 1,500 pounds of payload and has roughly 64.6 square feet of cargo space, according to the company. The vehicle can be charged either on a home’s standard 110-volt power that takes up to seven hours or on 220-volt power for a faster 3.5 hours. Since most fleets don’t want to have that kind of downtime, Biliti offers a free, swappable battery pack option for fleets that the company says can be swapped in as little as one minute using a scissor lift.

The company also offers an optional solar panel set up where three sides of the cargo area, equipped with solar panels, swing up like gullwing doors to become flat to the sky and absorb solar radiation to recharge the battery. Biliti says that a full charge from the solar panels takes roughly 3.5 to 4 hours in ideal conditions. Gayam said that most of these vehicles will be deployed in the tropical areas between the Tropic of Cancer and the Tropic of Capricorn where the sun hits the earth most directly for the longest periods.

Gayam’s comments at the LA Auto Show suggest the company is targeting e-commerce and retail giants like Amazon and Walmart. And while there appears to be some headway — the vehicle has been ground tested in the U.S., EU, Japan, U.K., UAE and India with companies like Amazon, Walmart (Flipkart), Ikea and Zomato — its likely that its first customers will be smaller commercial operations.

Biliti’s pitch, regardless of the size of the customer, is to solve for last-mile delivery. A recent $400 million PIPE investment commitment from Luxembourg-based investor GEM Global Yield will provide some of the capital needed to hit its goal.

Getting goods that final mile is a challenge that plagues crowded cities around the world and significantly contributes to congestion, global warming and increased accidents. When a small package or item needs to make its way from the delivery hub to individual locations, it’s often loaded onto a smaller vehicle with a collection of other items going to the same area. That last mile can be both a logistical and environmental nightmare and companies like Amazon, FedEx and UPS all struggle with it, often opting to use the local U.S. Postal Service as a way to get goods to consumers and businesses.

Biliti’s vehicles could provide one answer. However, there are limitations. The vehicle can only reach speeds of about 25 miles per hour, which means they’ll need to stick to inner cities and away from parkways, divided highways and obviously interstates.

Gayam said the vehicles will be able to be registered in states like California by January.