Foxconn’s fingerprints are all over one of the central details in the upcoming all-electric Fisker Ocean SUV.

The company unveiled the production-intent version of the Fisker Ocean SUV on Wednesday at the Los Angeles Auto Show.

The electric vehicle — Fisker’s first — will have a distinctive 17.1-inch central screen made by Foxconn that can rotate from portrait mode to landscape, which the automaker has dubbed “Hollywood mode.” This Hollywood mode is for the driver and passengers to watch movies or play games when the vehicle is parked and charging. 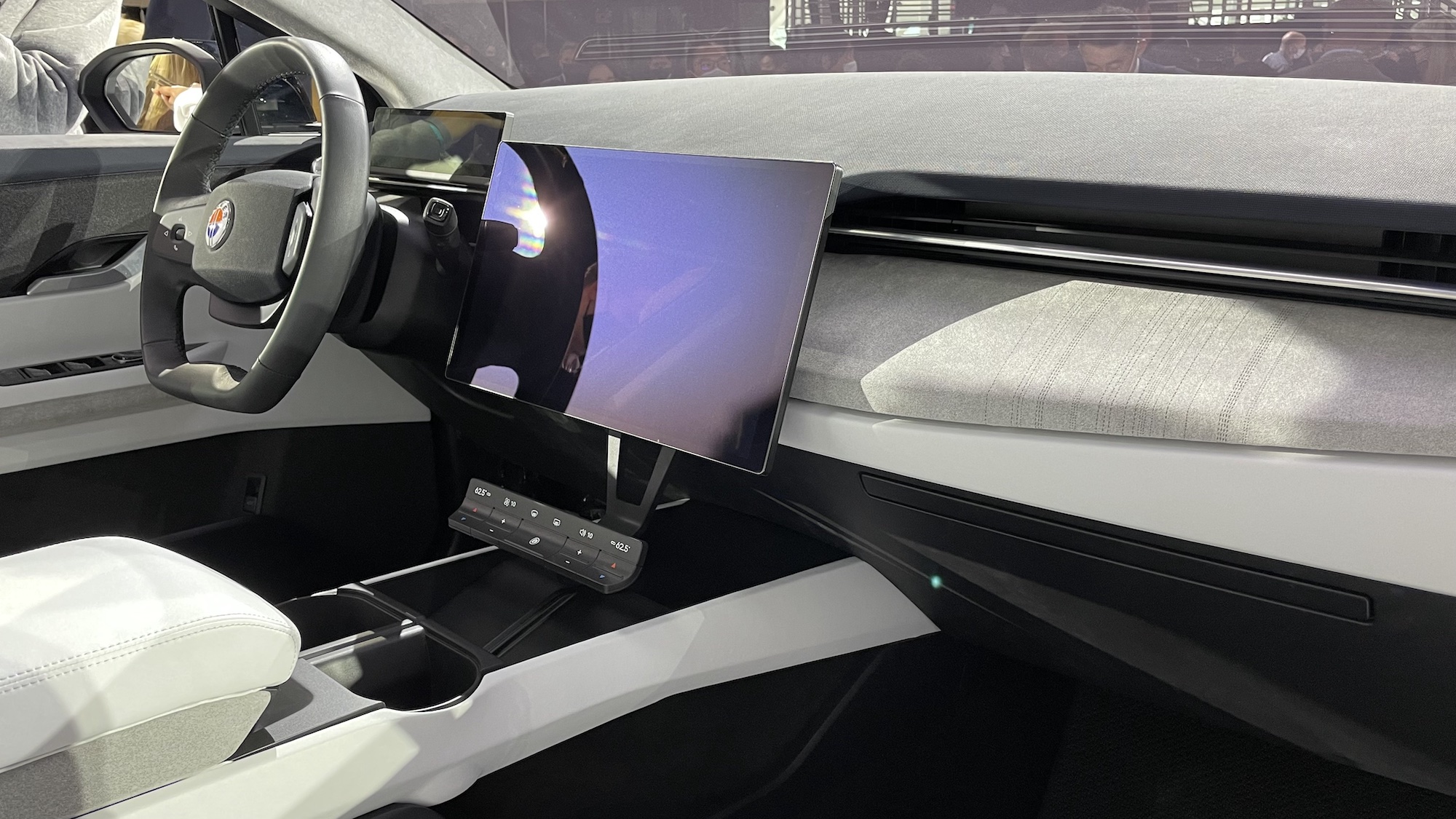 Fisker initially unveiled a prototype of the Ocean SUV at CES 2020, the annual tech trade show in Las Vegas. Now, the company is sharing more specs about the vehicle, including range, various trim levels and corresponding prices as well as details like a solar roof for passive charging.

Fisker plans to offer four trims, in 14 possible colors, starting with the base-level Sport priced at $37,499 — before incentives or taxes. The Sport, which has a peak 275 horsepower, will have an estimated range of 250 miles on a single charge using lithium-ion phosphate battery cell chemistry supplied by CATL.

The other trims, both of which are all-wheel, dual motor vehicles, are the Fisker Ocean Ultra that’s priced at $49,999 and the Extreme trim at $68,999. The first 5,000 vehicles will be the Fisker Ocean One, also at the highest price of $68,999. With those dual motors comes more power and faster acceleration times. The estimated peak horsepower of the Ultra will be 540 hp and a zero to 60 mph acceleration time of 3.9 seconds. The Extreme and Ocean One will have a 550 hp and a 0 to 60 mph acceleration time of 3.6 seconds.

The Ultra, Extreme and first edition will have CATL battery cells with a nickel manganese cobalt battery chemistry. The Ultra will have an estimated range of 340 miles and the Extreme will push the range beyond 350 miles, according to the company.

Fisker has two vehicle programs in the works. The Fisker Ocean SUV, which took center stage at the company’s stand at the Los Angeles Auto Show, will be assembled by automotive contract manufacturer Magna Steyr in Europe. The start of production is scheduled to begin in November 2022. Deliveries will begin in Europe and the United States in late 2022, with a plan to reach production capacity of more than 5,000 vehicles per month during 2023. Deliveries to customers in China are also expected to begin in 2023.

In May 2021, Fisker signed an agreement with Foxconn to co-develop and manufacture a new electric vehicle. Henrik Fisker said the two companies moved on the design “fairly quickly,” and are now diving into the engineering and technical details that include working on a patent for a new way of opening a trunk and other technological innovations.

Curiously, the vehicle manufacturing partnership came out of Fisker’s conversations with Foxconn to supply a unique infotainment display, Henrik Fisker told TechCrunch in an interview Wednesday.

“The real issue we have in the car industry is the technology in that car is more than three years old,” he said. “And there’s something wrong with that because we always feel like our phones are better and smarter and faster than what’s in our cars.”

The aim was to move as fast as the iPhone makers, he said in reference to Foxconn.

Fisker began discussions with Foxconn in January and locked in a deal soon after. The vehicle manufacturing deal, known as Project PEAR, soon followed.