Subaru pulled the cover off its first all-electric crossover for the second time in November. This time, the 2023 Subaru Solterra electric crossover — the Toyota bZ4X doppelgänger — made its U.S. debut at the Los Angeles Auto Show.

The first all-electric subcompact crossover is a joint project, like the Subaru BR-Z and the Toyota 86 (formerly the Scion FR-S) was before it, and the crossover is a close sibling, almost twin-like, to the Toyota bZ4X crossover that was announced in April.

The upshot: The Solterra is targeting Americans’ insatiable appetite for crossover and it gives Subaru a foothold in the EV market, with Toyota’s help.

The last two years have been very good to Subaru, even with chip shortages crimping the supply chain. The automaker has reported record sales in the U.S.

Toyota’s all-electric bZ4x is coming to U.S. with up to 250 miles of range

Known for its all-wheel-drive vehicles, the midsize Forester has been a segment leader in terms of volume, though the company reported that the compact Crosstrek, was the best seller for October of 2021 (by volume). Subaru has said that dealers are having a hard time keeping the more off-road-oriented Wilderness variants of the Outback and Forester on dealer lots, with markups as high as $5,000 above sticker.

Toyota owns 20% of Subaru as of September of 2019, but their partnership goes back to 2005 when GM ended the relationship it had with Subaru. The Toyota-Subaru partnership has been a boon for both companies, as Subaru brings expertise in all-wheel-drive systems to the table while Toyota brings its hybrid and electric powertrains to the smaller automaker. Both Japanese companies tend to be more conservative and considered when pushing into new territory, but the Solterra offers an interesting look into what Subaru thinks the future of electric crossovers with off-road features may look like.

A shared platform with all-wheel drive

The Solterra is another joint project that Subaru has done alongside Toyota, which means that some of the design, especially the interior bits, look a lot like Toyota, while the exterior, chassis and the all-wheel-drive system is all Subaru. Toyota also handled the battery sourcing.

That battery is a 71.4 kWh lithium-ion battery pack slung low between the axles and paired to two electric motors, one at the front and one at the rear. Subaru estimates the range to be around 220-plus miles and says that the Solterra can be charged from 0-80% in just about 30 minutes using DC fast chargers.

The powertrain makes 215 horsepower and 248 lb-ft of torque — much of which is readily available at the low end, potentially making the Solterra a decent soft-roader. 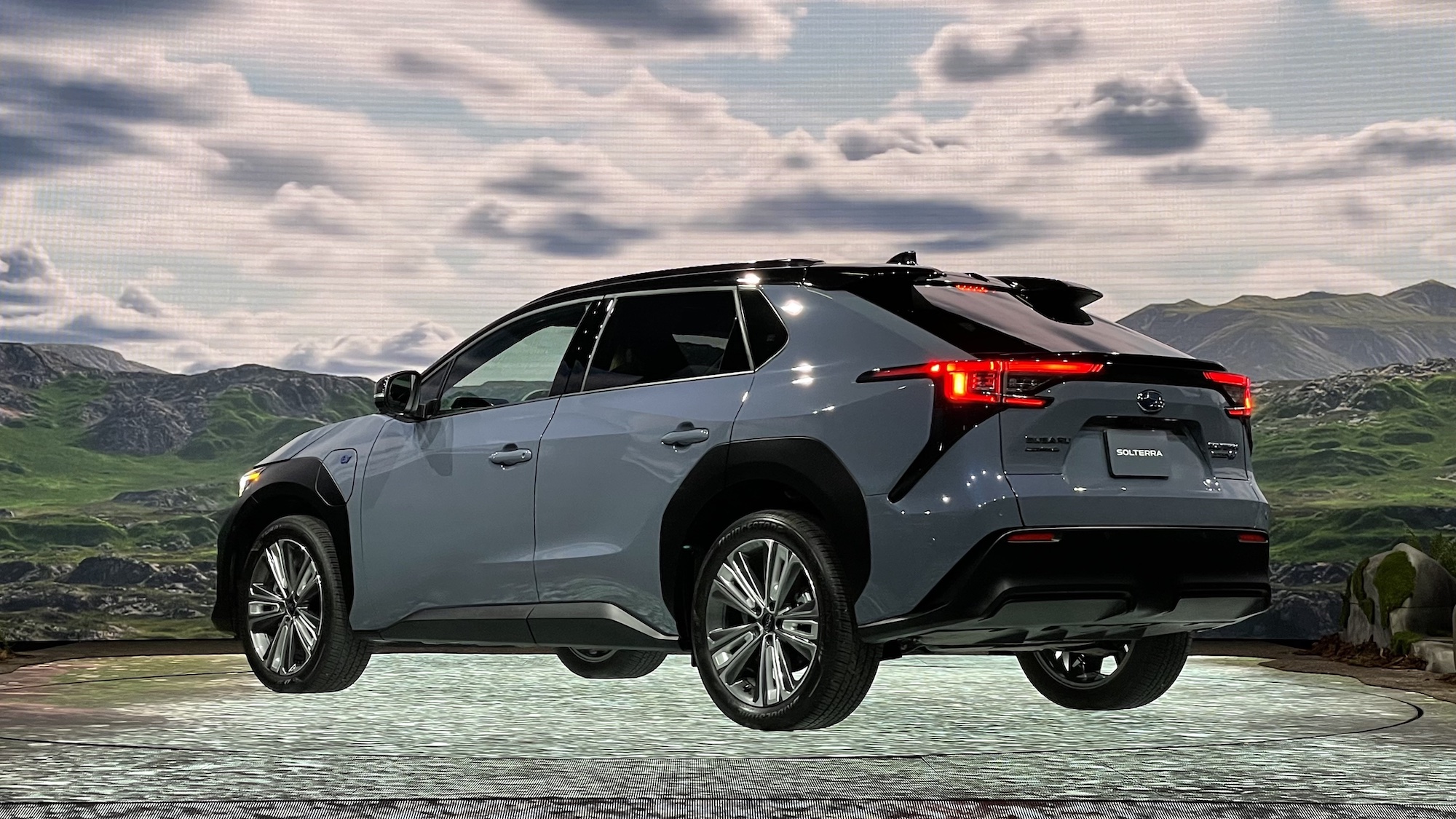 At an offsite unveiling last week, the electric-ute climbed up and over a small rocky path and through a shallow pond before stopping in front of the gathered press for photos, showing off its light off-road prowess.

While this marks Subaru’s first foray into the EV market, the Solterra will carry Subaru’s trademark symmetrical all-wheel-drive system, complete with Subaru’s X-Mode, which offers better traction in low-friction situations. When one wheel is in the air, the system will modulate the brakes to get you up and over the obstacle, according to Subaru, making this a moderately off-roadable EV. The 8.3-inches of ground clearance doesn’t hurt either, and Subaru made a point at the LA Auto Show unveiling to note that it is better than the VW ID 4 and Tesla model Y.

At last week’s event, Subaru also ran footage of Solterra testing on off-road obstacles like stairs, and offset ramps, to show just how capable the small-ute could be. It even pitted it against competitors like the Jaguar I-Pace on the same obstacles.

While pricing has yet to be officially announced, Subaru says that buyers can expect it to start around $39,000. Subaru will start selling the 2023 Solterra in mid-2022.