Slack has always differentiated itself as a communications tool by its ability to run applications inside of Slack and avoid dreaded context switching. At the Frontiers Conference today, the company is announcing a twist on app integrations with new building blocks — components that developers can build and string together into pre-packaged kinds of workflows.

Steve Wood, senior vice president of product management at Slack, said that the new approach required redesigning the entire platform with the idea of accommodating these reusable building blocks. In the past, a developer could build an app in Slack and it did what the developer wanted. These building blocks put the end user in control, which should make the entire platform more accessible and customizable.

“In this new world, we’re actually making [the platform] remixable going forward, so when you install an app, you [can access these] building blocks, and you can link them together, and they can actually talk to each other in channels. You can wire them together to [build] the workflows that you need for the kind of work you are trying to do,” Wood explained. 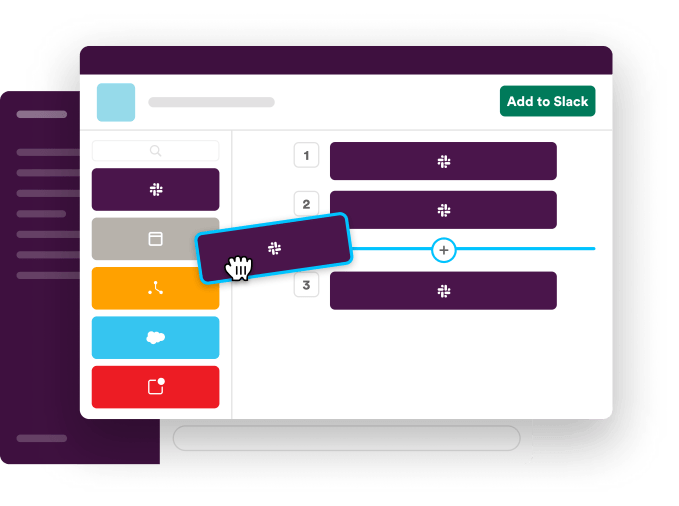 He said that the motivation behind this approach is that employees typically need to use an increasing number of apps to do their jobs, and this will provide a way to string them together and choose appropriate tasks inside these workflows built in Slack. Instead of forcing the user to jump between apps, in Slack or not, the software is doing the work for them.

He uses the example of a Zendesk help desk ticket delivered inside of Slack related to an outage. That could trigger an automated emergency response workflow where a PagerDuty alert goes out, a Zoom meeting is automatically initiated with a group of key people, the emergency response checklist gets pulled from Box, and a document is opened in Google Docs to track notes about the incident.

The tool itself is an interface for developers to build functions and triggers, which developers can create in a new Slack command-line interface (CLI). The trigger starts a function that gets the work flowing. These can then be saved as an individual app or block, or developers can string multiple blocks together.

Angela Ashenden, an analyst at CCS Insight who covers workflow transformation, said companies already using Slack integrations in conjunction with the Workflow Builder tool in Slack should like this update.

“The new capabilities are designed to accelerate the app and workflow creation process, closing the gaps between the different parts of the process, and making it easier for everyone — both tech and non-tech users — to build workflows, and also to make it easier to share and consume those workflows day-to-day. The goal is to allow employees to use workflows in ad hoc or personal processes, as well as in more well-defined team processes,” Ashenden explained.

Wayne Kurtzman, an analyst at IDC who watches the social and collaboration space, said that while the building block concept isn’t necessarily new, it could make Slack more broadly appealing as a place to process workflows inside an organization and allows it to move beyond pure communication.

“Slack has always had [integration] functionality, and the trick was making it as easy as building blocks. Pair the ease of use and reuse with people’s increased understanding of automation, and I expect that this feature will be widely used,” he said.

Woods said Slack is launching in private beta this week, but eventually there will be a distribution system like a blocks library or marketplace. That is still being considered. There will also be an update to Slack’s Workflow Builder down the road that will allow non-technical end users to string together these pre-built building blocks into meaningful templated workflows.

The tools will be released at some point next year, but if these building blocks work as described, Slack could become less about pure communication and more about workflow and process automation, something that could be important as it becomes more deeply integrated into Salesforce, which bought the company at the end of last year for over $27 billion.

No code, workflow and RPA line up for their automation moment