In a nutshell, the company has created an AI-powered photo editing tool that can be accessed using APIs. This means that you can do extremely powerful batch photo editing that is kind of like a mash-up between Snapchat’s photo filters, Adobe Lightroom’s batch editing features, Photoshop’s flexibility and the collaborative powers of Figma and the like. And yet, the tool is able to do things that haven’t been seen in the photo editing space so far. Facet just raised $13 million from Two Sigma Ventures with participation from Accel, Basis Set Ventures, Slow Ventures and South Park Commons.

To say that I’m more than averagely interested in photography is a bit of an understatement — I used to be a professional photographer, and have written 20-ish books about photography. So when Facet reached out to me to say they had something brand new in the photo editing space, I got pretty excited, followed by “extremely confused.” Even after talking to the company’s founders and investors for an hour, I still couldn’t wrap my head around exactly what the tool is, nor who it is for.

It all became a lot clearer when I got a chance to play with the tool for myself. I uploaded a gallery of dance photos I shot at a recent Lindy by the Lake dance event in Oakland, and let Facet do its thing. The web-based editor has a profoundly steep learning curve — a learning wall, if you will — but I was very quickly able to do some editing that would have been hard, if not impossible, in Photoshop.

One filter I created was “Detect background, then blur and desaturate the background.” The foreground/background detection on the images wasn’t perfect, but for the photos where it worked, it was an extremely fast way to make the photos pop — without having to open and edit each individual image in a photo editing suite. 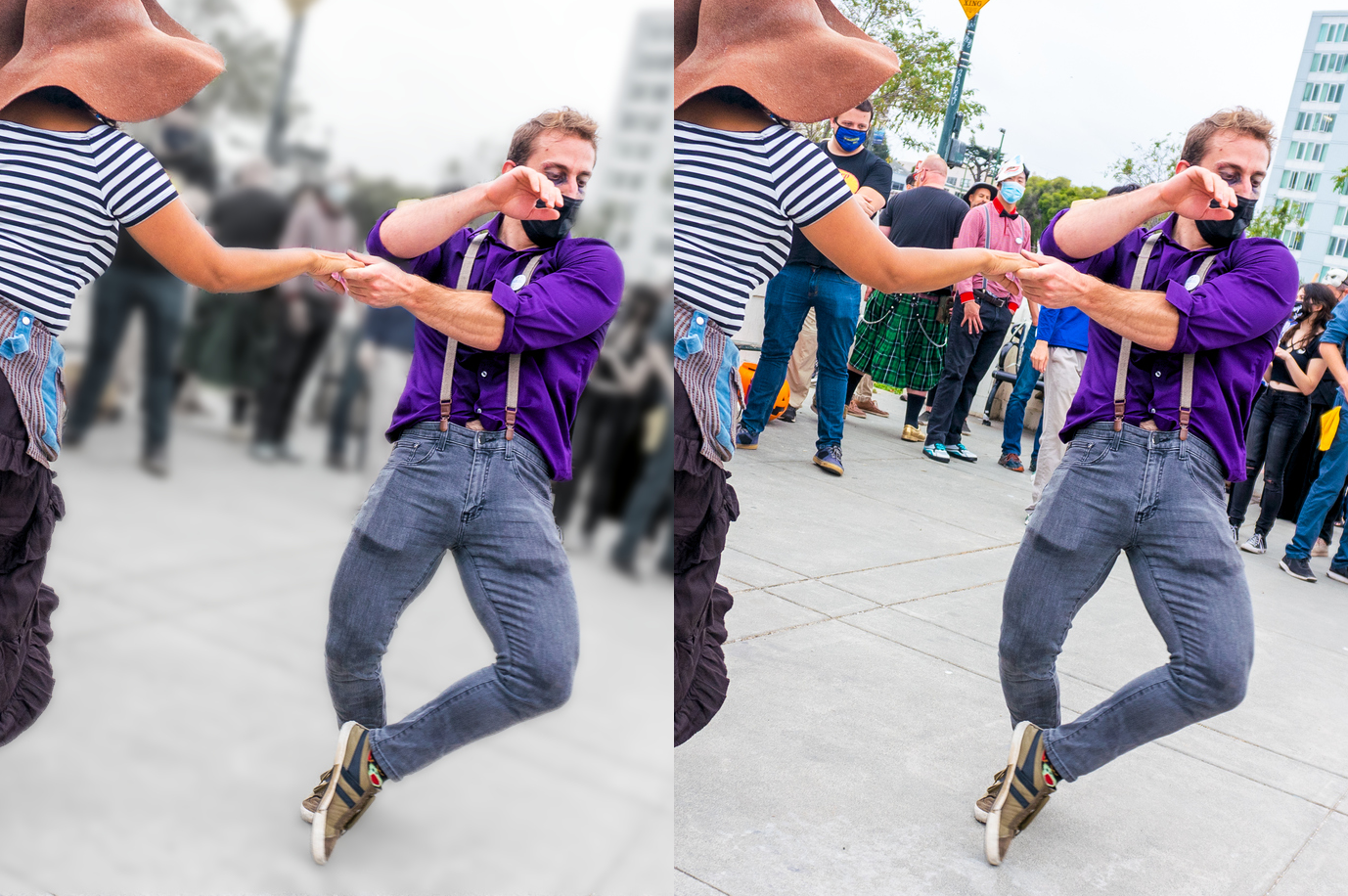 The image on the left had the background desaturated and blurred automatically by Facet. The original is on the right. The result isn’t perfect, but Facet was able to do this to 200 photos in a matter of minutes — an incredibly impressive feat of AI image editing. Photos by Haje Kamps, editing by Facet’s AI.

Facet is particularly aimed at commercial-grade image editing where you need to prepare and present huge quantities of photos, but — as with Photoshop — it can be used in dozens of different ways, limited only by the image-makers’ creativity.

“As you edit an image and layer on those changes, we analyze every edit and we figure out how to transfer that across a much larger content library, building you your presets automatically. This is very powerful for maintaining brand consistency across a campaign for making sure that all your product, photographs, are consistent,” explains Joe Reisinger, CEO and co-founder at Facet. “One example is someone like Spotify. You’ll probably have seen the duotone effect they are so famous for when it comes to album covers. We can create that and give you a reusable image editing pipeline with an API endpoint, so you can process thousands of photos very quickly.”

The company’s selection and filtering tools are powerful and infinitely scalable. The company does have a consumer-grade platform that hobby photographers could use, but where the company really shines is when the tool is used by creative software developers to use the APIs.

“Instead of trying to adapt old, print-centric software to the internet age, we’re building the tools creatives need from the ground up with a content-aware image editing platform,” Reisinger said.

An example of the Facet interface. In this screen shot, I’ve asked the tool to desaturate and blur the backgrounds. When it works, it is incredible, and something I’ve wished Lightroom had been able to do for years. When it doesn’t work (see the middle two photos, where only the woman’s leg is in color, or where the tool failed to detect the dancer’s face as the foreground), it is a little disappointing. Having said that, it’s possible to download the images as layered Photoshop files, so it would be trivial to tidy that up — and the time saved in the batch editing process would be enormous. Image: Screenshot from the Facet tool

“One aspect I really like about Facet is that it enables asynchronous collaboration. You can define the style of a photo, and designers can use the same style on lots of different photos without having to manually edit each of the photos. You can encode the look and feel of a photo programmatically, and copy them across from one image to another,” said Dan Abelon, partner at Two Sigma Ventures, the lead investor in Facet’s round. “You start to get into the more community side — if you like someone’s style, you can apply it to your own images, which opens up a whole world of real-time collaboration.”

“This isn’t just about making money. Facet is about to have a big impact on the creative community and the wider web. I can tell that they want to make a mark on the web as a whole, and that’s something we were really attracted to as well,” said Abelon.

The company will be using its recently expanded war chest to do the obvious next couple of steps after a Series A: expand the team, find more traction and build out a go-to-market strategy. You can sign up for a free trial at Facet to kick the tires, and plans start at $24 per month for professional users, and $50 per month for high-end team users with API requirements.