Late last month, Rippling, the now five-year-old company founded by serial entrepreneur Parker Conrad, raised $250 million in Series C funding in a round that pushed its valuation to a whopping $6.5 billion.

Now, Conrad is taking the wraps off what had investors so excited about the outfit, which already helps companies manage their employees’ payroll, benefits, devices and apps, but which is adding an almost astonishing number of features to its existing lineup, beginning today.

Indeed, talking with Conrad earlier this week, there was no doubt about his ambition to build a very big company. He even compared its potential to that of Salesforce. Salesforce “is tying together all of the business systems that you use around this idea of a common customer identity,” he said. Rippling is “meanwhile saying, ‘Hey, look, there’s this other way that you need to do this, which is tying all these systems together around a common employee identity and making that the centerpiece of this unified sort of schema across all the different business software you’re using in your business.'”

It’s bold, considering how much HR software and IT software already exists in the world — some of it created previously by Conrad. It’s also compelling when viewed as a whole. (We saw the investor presentation.) In fact, all these new features are getting their own overarching branding; they are now part of Rippling’s “Unity” platform, which is driven by five separate product units, each with bells and whistles that the deepest-pocketed customers are likely to order as a complete package given that they are more powerful together. (Note that right now, pricing for the whole enchilada — “unlimited Unity” — is $25 per person per month.)

So what’s under the hood exactly? The first and seemingly most important piece of Unity is a “no-code” system that promises to allow company execs — whether they work in HR or sales or the engineering department — to create custom triggers that set off actions automatically in Rippling and in third-party apps connected to Rippling. (Until now, Rippling has set up third-party apps for its customers’ employees but not been integrated with them. In this new phase for Rippling, it’s very much focused on integrating the data and services of a growing number of such outfits — with their consent — like the credit card company Ramp, and Checkr, which runs background checks on employees.)

Among the many examples Conrad offered here include the ability to set a workflow to automatically detect potential pay inequity, and to set a cross-system workflow that notifies engineering via Slack that an engineer can’t resolve a high-priority ticket in JIRA because they are out of office.

The second bucket in Unity centers around an analytics suite that Rippling says it has built from the ground up to support analysis of very large data sets. Conrad uses employee compensation to highlight this particular one. Many companies pay their employees referral bonuses when they hire candidates that they referred to recruiting, for example. Normally, he says, businesses have to export such data from multiple systems into an Excel spreadsheet to figure out who to pay, how much to pay, and whether certain employees are eligible for referral bonuses; Rippling, he says, will now make it possible to see that data in one place, where the answers become clear much faster.

A third overarching piece of Rippling centers on access, including the ability to easily configure employees’ access to all the various SaaS products that companies use today in just a few keyboard taps. Similarly, according to Conrad, Rippling is making it dead simple to add employees to the right spending policies in a company’s corporate card or spend management system, and to the right part-time-off system. (Different employees have different holidays depending on where they are the world.)

It’s also possible to  revoke access to everything in one fell swoop when that employee and the company part ways, says Conrad. 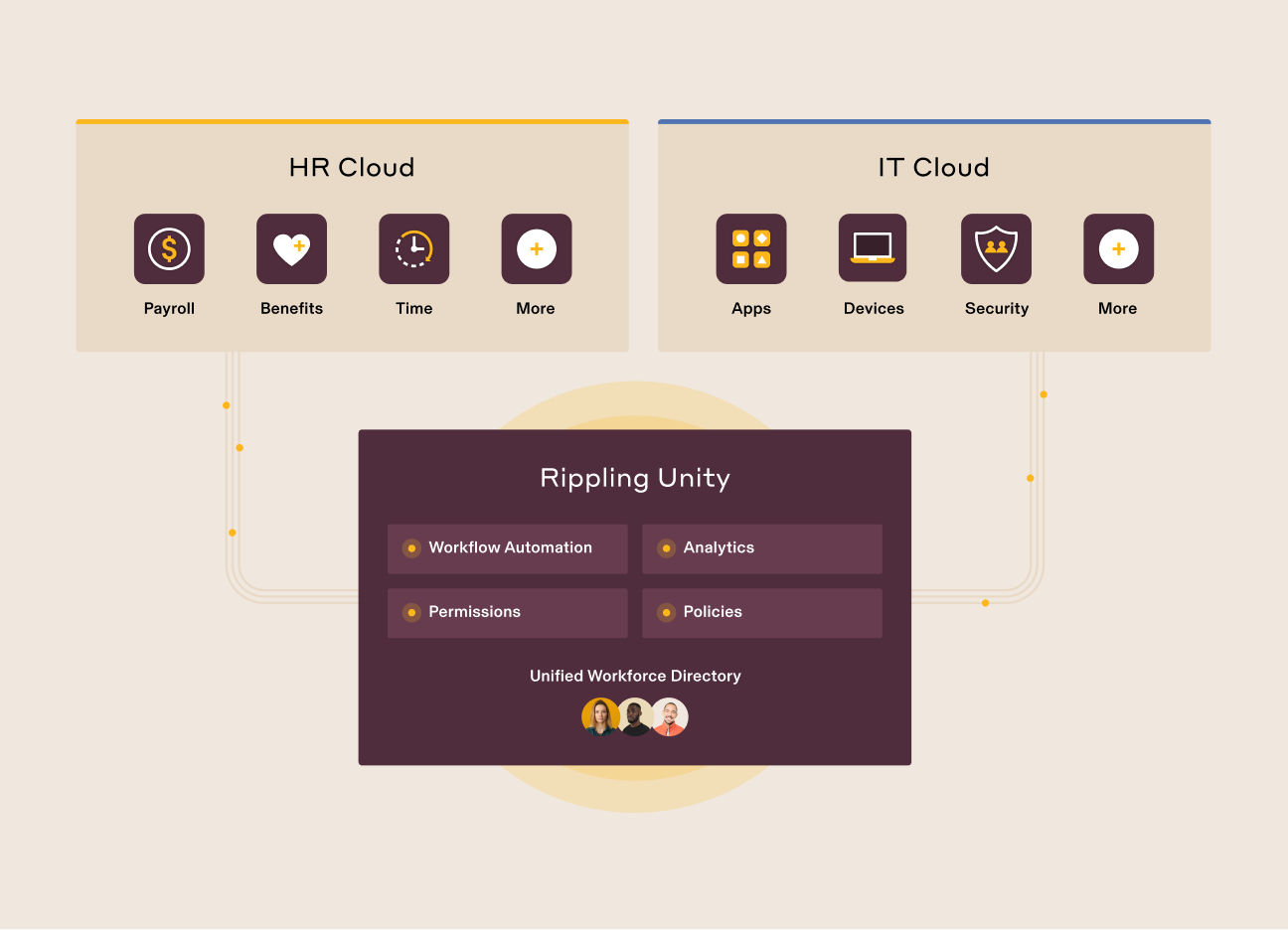 Not last, Unity invites users to do as much as they like in terms of customization through a scripting language that Rippling has launched called RQL that can be used to create “formula fields” inside of its analytics suite. It plainly borrows core concepts and syntax from Excel, as Conrad readily notes, but he says he has also incorporated capabilities from SQL such as “select” statements, as well as some elements from Python.

You can learn much more about all of this stuff here.

In the meantime, we asked Conrad about some of the bigger picture issues, like whether Rippling favors certain third-party providers with whom it is doing integrations. On this front, he said that Rippling “wants to work with everyone.”

The more third-party services, the better, he said, suggesting that every piece of data makes Rippling that much stickier. When it comes to corporate expenses specifically, he said he expects that “over the next three to six months, you’re actually going to see a lot of the transactional spend management data in [Rippling], so that clients can run analytics and reporting on spending within their organization. They can see how much the people in their part of the organization are spending over time, where the money is going, who are the top vendors and in what the categories,” and even trigger an alert when spending exceeds a certain amount within a particular classification, “within Rippling or even back inside of systems like Brex and Ramp and Expensify.”