One of the larger seed rounds of 2021 in the industry, the raise was led by XYZ Venture Capital and Congruent Ventures with participation from First Round Capital, Garuda Ventures, MCJ Collective, Skyview Ventures and numerous other individual investors.

The problem with climate project financing

There are core issues in launching and scaling a successful climate project. Banks require an offtake contract – guarantee purchase of carbon credits created by the project – to underwrite any financing; securing an offtake contract is difficult when a company is young.  A VC’s expectation on ROI often clashes with industry standards. Multiple stakeholders — insurance, investors, offtakers, debt investors and the project developer themselves — create long financing timelines, intensive negotiation and extremely complex underwriting processes.

Furthermore, climate risk underwriters and insurers have lacked data to create efficient underwriting processes. Each time a project turns up, there is an entirely new underwriting model developed. Finally, securing an offtake contract is done one-to-one. This means projects without an offtake agreement from the onset will have to pander to buyers after the fact. 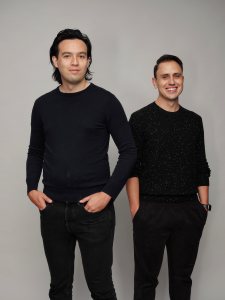 “We have set the goal internally of supporting the avoidance, reduction or removal of one gigaton of CO2e by 2030; scaling to a billion tons a year shortly there after,” Richards states.

With CEO Richards’ background as a former Wall Street lawyer, serial entrepreneur and early-stage investor, and Whiting’s data and software experience as former founding COO of Clearbit, Evergrow shows promise in tackling this enormous challenge. The growth of the carbon markets over the past two years suggests the endeavor could be lucrative as the long-term offtake carbon purchase price is set.

“[Evergrow] can reduce the complexity two ways,” Richards said. “One, we can do the work upfront to make a programmatic underwriting and funding model for each project type. And second, we can use data and technology to underwrite or do the majority of the heavy lifting and underwriting versus humans. And so our goal internally is to be almost an order of magnitude faster in terms of time to close than a traditional project financial.”

When asked for details on the underwriting structure itself and the capital partners who back them, Richards said, “We aren’t ready to describe this in detail yet, but we’re exploring a range of structures with our capital partners to meet their needs. … We’re actively building up a base of multiple financial partners.” 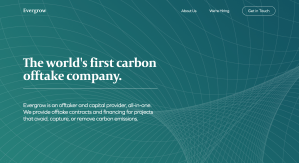 However, Richards did provide insight on how they will be judging risk. Evergrow will utilize historical data points to predict which sets of projects can be underwritten and how. Standardizing the underwriting process is only possible now because the industry has hit a critical mass of data points and success metrics for carbon projects.

Many financial institutions won’t consider financing climate projects unless they have a dedicated offtake contract. The risk is considered too great.

“By bringing long-term offtake contracts to the carbon markets, we provide price certainty and unlock capital for these projects,” Richards said.

According to Ecosystem Marketplace, the voluntary carbon market has “posted a near-60% increase in value from last year … [with] markets on track to hit $1B in transactions by the end of this year.” Judging by the growth rate, long-term offtake contracts could generate a significant amount of returns for Evergrow’s capital partners.

For example, Swiss Re’s partnership with Climeworks — valued up to $10 million — is one of the largest long-term offtake contracts to date. The large insurer and reinsurer SiriusPint Ltd. partnered with Parameter Climate, which provides full-service climate underwriting and distribution.

Evergrow believes that these companies are signals for market readiness, not necessarily direct competitors.

“We were really pleased to see what Swiss Re did with Climeworks because we think it’s great validation of the market,” Richards said. “When a balance sheet as large as Swiss Re thinks that it’s worthwhile to enter this market and provide what we’re providing, that’s really great validation. The opportunity has to be measured in the billions in order for Swiss Re to even think about it or care about it. That was great validation for us.”

It’s not a marketplace

The final step after underwriting, funding and signing the offtake agreement is the eventual return to the capital partners. One competitor, Puro.earth, created a carbon removal marketplace simplifying developers’ access to offtakers. When asked about creating one-to-one marketplace similar to this, Richards was quick to clarify.

“Evergrow does not match offtake contracts to investors on a deal-by-deal basis,” Richards said. “When you borrow money from Brex, whether on a credit card or working capital line, it’s not like Brex matches you with an investor on the backend who gets to set the price and you know, say yes or no. Instead, Brex has arranged warehouse financing and more, so Brex can give you that financing immediately. It all gets pooled and then the investors take the pool of return.”

The analogy is especially relevant because Brex CFO Michael Tannenbaum is an investor in Evergrow, as well.

“We’re hoping to emulate that kind of a structure, where we raise one or more facilities from the capital markets into which all of our offtake contracts get pooled,” Richards said. “Investors get the benefit of aggregation and pooling and also levered exposure to the underlying.”

The set price of a long-term offtake agreement allows stability for the developer and financing partners with understandable risk growth. The silver bullet lies in Evergrow’s ability to efficiently underwrite the right products, though without the specifics on the exact underwriting model, it’s tough to fully predict their success.

Evergrow has a handful of notable individuals investing in the startup — Bridgewater Associates Sustainability investor Karen Karniol-Tambour, Plaid CEO Zach Perret and Instacart co-founder Max Mullen, among others. Evergrow will start in California and expand to the U.S. with hopes of international expansion depending on the climate project type.