Richard Socher, former chief scientist at Salesforce, and his co-founders at You.com have been on a mission over the last year to build a different type of search engine, and today the company is releasing a public beta, while announcing a hefty $20 million seed investment.

The new search engine doesn’t use a scrolling vertical set of results as you see on every search engine out there. Socher and team wanted to throw out assumptions and come up with something entirely new.

“The design actually took a lot of iterations. and we tried to have a beginner’s mindset and tried to really innovate with search. In some ways it’s crazy, but the main idea of a vertical list is now getting more and more interspersed and cluttered with other things [like ads] and hasn’t changed in 20 years,” Socher told me.

They went to work to change that and came up with something completely different. For starters the search results page is linked to different apps such as Medium, Yelp and Reddit. You can customize the importance of those apps, or you can choose to not use a particular one at all, as you wish.

The results appear in categories by app along with a web results category, and you scroll left to right to see results in a particular app or category. What’s more, you can see the results such as video or a code snippet without actually opening a fresh tab, saving time and keystrokes while reducing tab overload.

If you like a certain set of results better, you can move them up in the results, and You.com will remember that in the future and present you the results you like better next time. 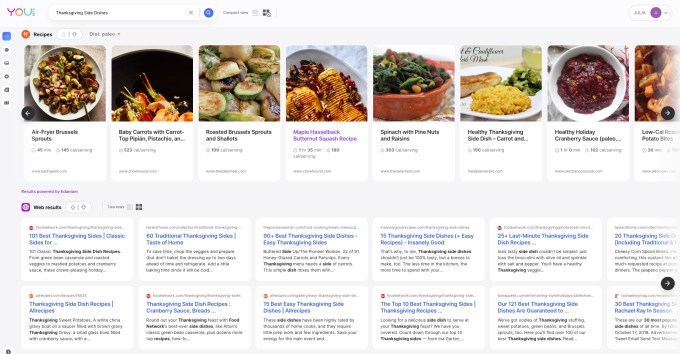 Socher says that the founders chose the name because it’s about what you as a user need from the search engine. “We are true to our name. It’s about you. So you actually can choose here and say ‘I want to see more Reddit or I want to see less Reddit,'” he explained.

If it doesn’t make sense to display results from Reddit, like when you’re looking for a Thai restaurant near you, it will display Yelp results at the top instead. If you don’t like Yelp results, it can simply display web results, but this ability to customize gives you a lot of flexibility and control over the results you see.

If you’re worried about this level of customization making the results too one dimensional, especially when choosing news sources, the items you don’t want to see displayed prominently don’t disappear, they simply move down the list of results. If you don’t care about the customization features, you can let the search engine display the results for you.

For starters, they are focusing on developers and privacy aware users. They had considered shopping as a primary use case, but in testing they found when they linked to retailer product catalogues, alpha users thought results were ads when they were actually pages from a catalogue. They decided to move onto other use cases.

Developers can search for things like code snippets. They are able to quickly scroll horizontally through the set of snippets, find something, copy and paste it, and be done much faster than in Google or even a privacy-focused search engine like DuckDuckGo.

For people concerned about privacy, you can go into what Socher calls true Incognito mode where everything about you including your IP address is hidden. The search engine is designed to make it simple to move in and out of Incognito mode, so if you need your location turned on to find a restaurant, you can turn off privacy mode, then quickly turn it back on.

In terms of monetization, the company vows never to sell your data to a third party, but for now they are simply trying to get the design down and grow the user base. Socher says the company will concentrate on monetization later. There will probably be ads at some point, he says, but without connecting the query to a user, and without cluttering the results.

As an example, if you search for air purifier you may get an ad for that, but the company displaying that ad won’t have direct access to data about you, as is the case now with most online ads. The devil will be in the details here, of course, but this is how Socher is describing it.

Up until today the search engine has been in private beta with a couple of thousand users, but starting today anyone can try it. If you’re using Chrome, you can download the extension.