When Apple launched the Apple Watch, they made a big hoopla out of teaching its consumers how excited it was about having a “digital crown” and “complications”. To the watch lovers among us, that was a head-scratcher — of course a watch has all of those things.

At the time, Apple was falling victim to its heritage as a computing company. In short — it wasn’t creating a smartwatch — it was creating a tiny iPhone you carry around on your wrist, while desperately trying to convince everybody that “yes, this is a wristwatch, we promise!” 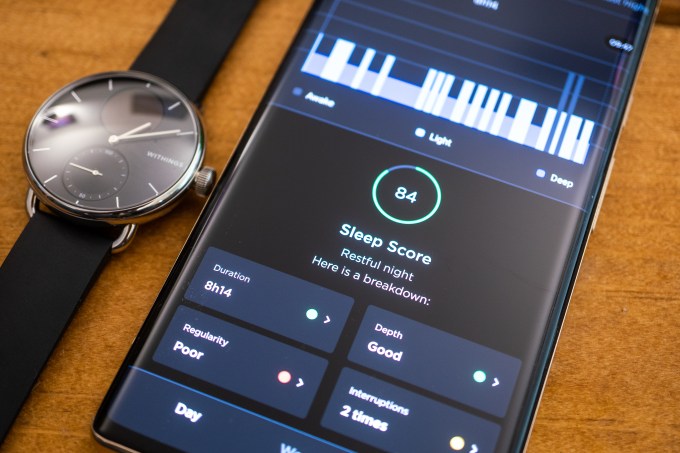 Withings’ Health Mate app is exceptional, especially if you use more than one of the Withings health products. It integrates with Google Fit and Apple Health Kit so you can port the data into your preferred ecosystem. Image Credits: Haje Kamps for TechCrunch

I’ve seen the parallel in the car world as well: A lot of the traditional car manufacturers scratched their heads and thought, “How can we cram a truckload of batteries and an electric drive train into one of our cars,” whereas some car manufacturers — Tesla in particular — essentially took the challenge differently. Tesla’s approach was, “What if we could take an iPhone, which just gets better with time as more software updates become available — and build a car around it.” The result, for Tesla, is a car that looks and feels spectacularly different than most of the other cars. Whether or not you prefer the interior and ownership experience of a Tesla or the newest generation of Mercedes electrical car boils down to a lot of things, but in my mind, it’s about a general philosophy and approach to design and functionality.

All of which brings us to the ScanWatch. Withings has always taken a different approach than Apple. With its relatively minimalist watches that actually look and feel like timepieces, it came at the same problem Apple was trying to solve, but the way a watchmaker would do it. How do you build a great, functional watch that looks and feels like a watch, but adds a dollop of smart features? Its Steel HR showed what was to come, and the Withings ScanWatch is a natural and more ambitious step up the ladder from there.

The upshot of the different design philosophy is that you can’t use the Withings ScanWatch as a remote control to take photos with your phone. You can’t talk to it or use it to send texts. You can’t use it to read emails or play music or record voice memos. And if those things are important to you, well, the Withings ScanWatch simply isn’t for you — you’re not looking for a smart wristwatch, you’re looking for a microscopic supercomputer. 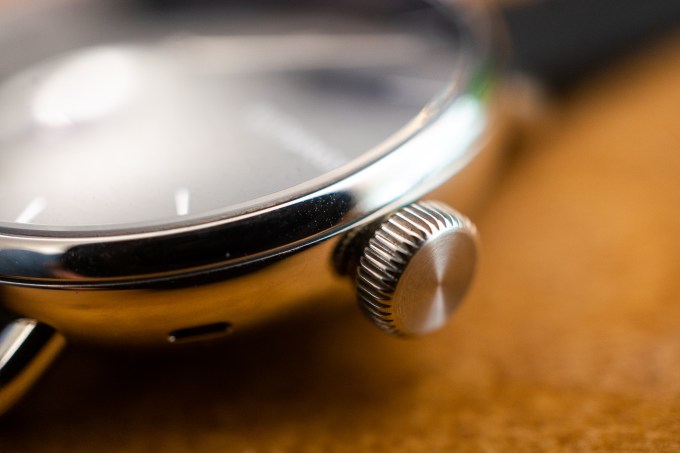 The overall build quality and attention to detail of the ScanWatch is extraordinary. This feels more like a premium watch than a miniature computer. Image Credits: Haje Kamps for TechCrunch

Having spent a little while with Withing’s top-of-the-line smart wristwatch, I found myself being delighted time and time again, both for all the things it is, but — most importantly — for all the things it is not. I stopped wearing an Apple watch because I disliked the design (it’s a soulless black square — much like a smartphone) and I hated the fact that it kept buzzing and notifying me of messages and tweets and emails. Yes, you can turn those things off, but if you turn off all the smartphone-extension features of the Apple Watch, you eventually end up with very little that makes the watch worth carrying around, especially when you have to charge it every day. 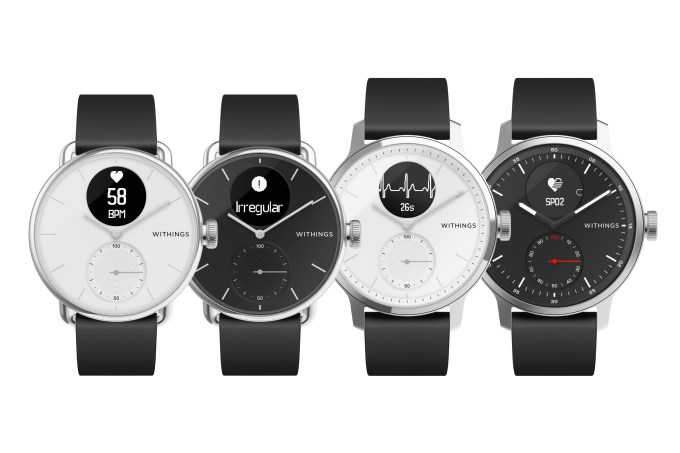 Withings’ ScanWatch is the exact opposite. For one, it looks like a simple, minimalist wristwatch. If the little PMOLED display is off, you would be forgiven for thinking it was a high-end, understated timepiece from one of the many high-end watch manufacturers. The display isn’t a fancy retina display, but the trade-off is that you get up to a month of battery life. The watch feels like a wristwatch, too — heavier than you would think, but in a way that feels reassuring to me. You know that it is there, and if you’re used to wearing high-quality timepieces, that’s not a bad thing.

The ScanWatch also brings a ton of extremely high-end tech to a wristwatch, focusing primarily on health and wellness features — they are an extension of its fitness tracker roots, rather than extending the functionality of your phone. 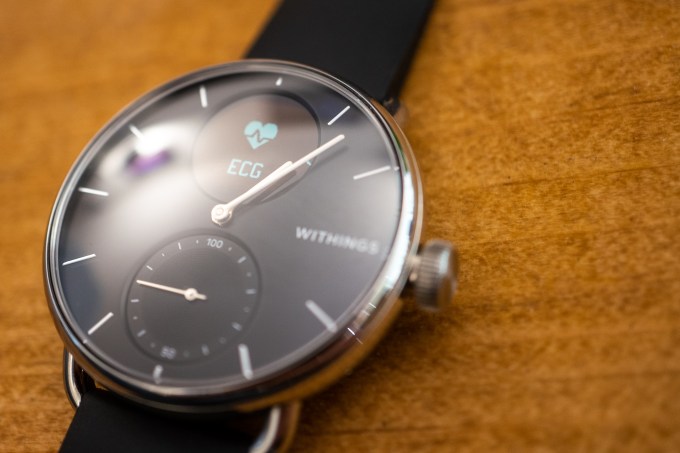 Withings’ ScanWatch brings a ton of medical-grade trackers to your wrist. The EKG functionality is the crown jewel of the watch/app combo. Image Credits: Haje Kamps for TechCrunch

The watch has been available in Europe for a while, and the reason for the delay for its U.S. launch further illustrates how different this device is from its competitors. To launch, it needed clearance from the FDA. Its built-in EKG is high-quality enough, the company claims, to be able to detect atrial fibrillation (afib), one of the most common cardiac arrhythmias — and a leading cause of stroke, heart failure and other heart issues.

To offer that data to you as a consumer, the company claims you need a prescription, and for the first EKG measurement to be analyzed by a medical professional — it isn’t entirely clear how other smartwatch manufacturers with similar EKG functionality get around this, or whether Withings is doing something fundamentally different.

Activating the EKG approval process is free, and you will not be charged whether you are approved or not for continued EKG use. In the meantime, the company is working to make the EKG functionality fully available to users without a prescription or additional costs, presumably by mirroring what Apple, Samsung and the others are doing to get their FDA ducks in a row.

If that all sounds a little over the top, well, you wouldn’t be the first to make that observation. The company went on the defensive before the watch was even released, and ended up publishing a FAQ especially addressing the EKG functionality.

In my mind, it serves to highlight the company’s ambitions to be a health-first device. It fits in very well with the rest of the company’s devices — it sells smart sleep trackers, blood pressure cuffs, smart thermometers and body-fat-measuring scales, for example — and the excellent Withings Health Mate app that powers all of Withings’ devices is vying for your attention as the central hub as your physical health. 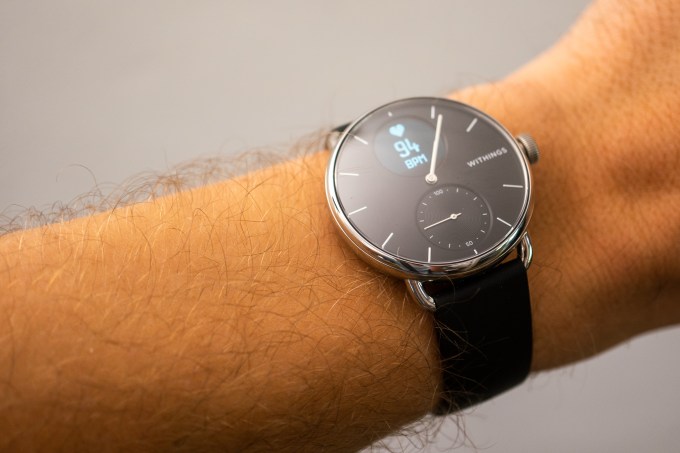 Withings’ ScanWatch comes in two sizes. This is the 38 mm version, which feels about right-sized on my “do you even lift, bro?”-sized wrists. Image Credits: Haje Kamps for TechCrunch

The sum of all of this is a truly exceptional (time)piece of technology. The watch crams heart rate monitoring, blood oxygen monitoring, the EKG functionality, step, workout and activity trackers, connected GPS, an altimeter, sleep trackers, smart wake-up alarms and much more, all into a sexy, easy-to-forget device that lives on your wrist.

As a tech reviewer, I don’t have the medical expertise to determine whether all of these features are as good as the company claims they are. From conversations I’ve had with medical professionals, the general consensus seems to be that it isn’t as good as the multi-thousand-dollar industrial medical equipment that lives in your doctor’s office. Frankly, that would be unreasonable in a $300 consumer-grade item you carry around on your arm.

If you are a health and fitness-forward person who cares about style, it’s hard to go wrong with the Withings ScanWatch. It’s an incredible leap forward in wrist-carriable technology and a breath of fresh, well-oxygenated blood into a category that was starting to get a little hypoxic.

For what it’s worth, while I was glad to see the back of my Apple Watch when I put it on eBay a few years ago, I will buy a ScanWatch with my own money once this review unit goes back to Withings; high praise from someone who approaches a lot of gadgets with a backpack full of skepticism these days.