Most companies would kill for Peloton’s level of user buy-in. The company’s cycling and treadmill products have built an almost cult-like mystique around the connected fitness platform. It’s a level of devotion that had seemingly only grown during the pandemic, in spite of setbacks, including shipping delays and a pair of recalls.

In spite of numerous claims surrounding the supposed death of the gym, however, re-openings have begun to impact the company’s bottom line. How can a company in Peloton’s position hamper such a slide? The quick and easy answer is to expand into additional home fitness categories. And while the best time for the Peloton Guide to arrive would have been, say, March 2020, it seems entirely possible that the new hardware could goes a ways toward keeping the company well positioned in the home fitness space.

Recent rumors found Peloton jumping feet first into the booming world of home rowing machines alongside brands like Hydro — and while such a move still seems entirely likely, today’s announcement is more firmly targeted at the likes of Tempo and Tonal. And, perhaps most importantly, it finds the company releasing its most inexpensive hardware to date.

The Peloton Guide’s $495 price point is a full $1,000 less expensive than its cheapest product, the Bike. That’s due, in no small part, to the fact that it’s the least intensive of the bunch. That price gets you the Guide (effectively a camera system that plugs into a TV), a heart-rate band and a remote control. Other strength training essentials are user-supplied — something the company spins as a plus in the material, noting, “Members will be able to use their own equipment, weights, or accessories and won’t need any bulky devices to get started with their strength experience.” So, BYOW.

It’s pricier than the recently announced Tempo Move, a $395 mini-fridge-sized product that comes preloaded with its own weights. The other big difference on the hardware side, however, is that Tempo’s product relies on a user’s smartphone — which automatically reduces the potential user base to those with newer iPhones. 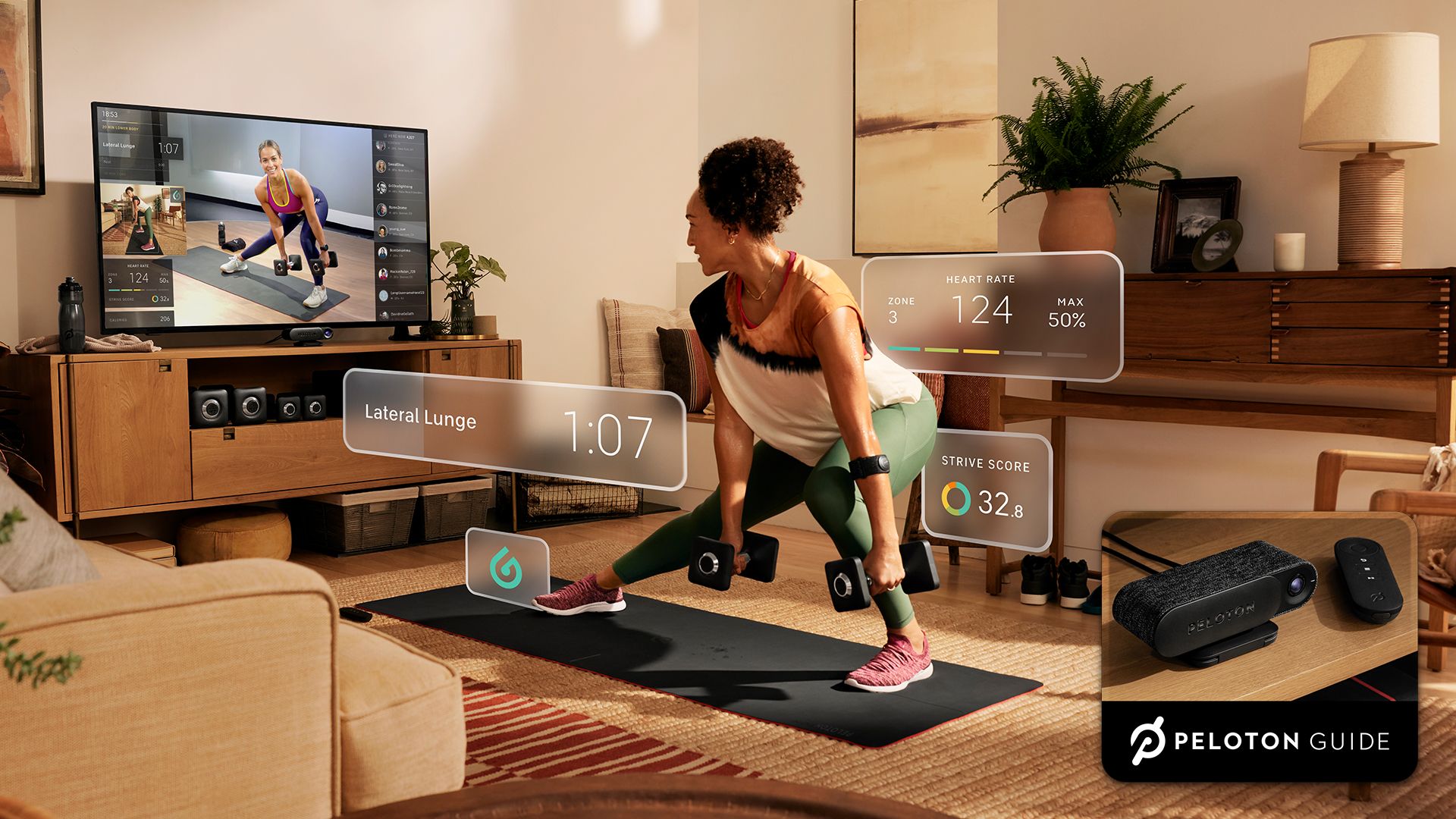 Instead, the Peloton Guide is built around the company’s own camera system. Here’s what the company has to say about its feature set:

Peloton Guide makes strength training appealing and motivating to beginners and experts alike by using machine learning, a type of AI that uses data to identify patterns and make decisions with minimal input from an engineer, to enhance the renowned Peloton strength class experience. Peloton Guide uses ML to help Members track their movements and progress.

The system works with the company’s existing range of strength courses, which, it notes, “has been the fastest growing discipline for Peloton.” The monthly content fee is $13. The Guide won’t quite hit the holiday cutoff, but it should be around for those New Year’s resolutions, arriving in early 2022 in the U.S. and Canada. Users in the U.K., Australia and Germany will have to wait until later in the year.