Apps that let people do virtually what they would have previously had to carry out in person have seen a boom in the last 20 months of pandemic living, and one of them today is announcing a big fundraise on the back of its own strong growth. Jackpocket, which currently has 2.5 million active users who use its app to buy tickets to play lotteries in 10 U.S. states, has picked up $120 million in a Series D round, funding that CEO and founder Peter Sullivan said it plans to use to expand from its core business of lottery ticket sales into a wider array of mobile gaming, and to take its business to more markets both in the U.S. and further afield, both on its own and in partnership with others.

“We expect by the end of Q1 to be in at least five other states,” Sullivan said, adding that technology investments are also on the to-do list, by bringing in more “best practices” from the worlds of e-commerce, subscriptions and mobile wallet services, alongside exploring other forms of gaming.

“What a lot of people don’t know about the lottery is that a percentage goes to good causes,” he said. New areas that Jackpocket wants explore include raffles, sweepstakes, bingo, social casino games. “We want to provide more fun game play and chances to win, and more ways to give back.”

This is what Jackpocket’s expansion strategy looks like according to its most recent pitch deck: 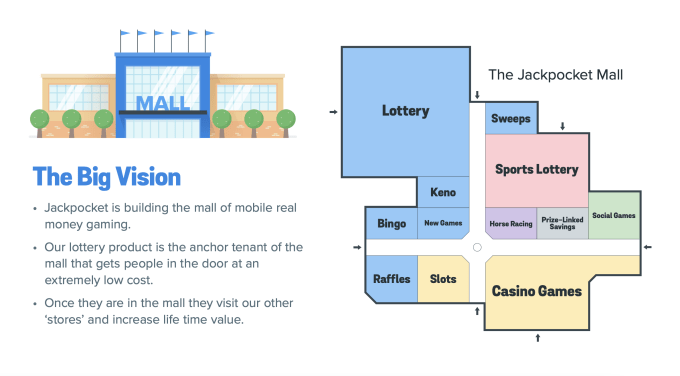 Left Lane Capital is leading the investment, with comedian Kevin Hart, Whitney Cummings, Mark Cuban and Manny Machado, among the individuals participating, alongside previous backers Greenspring Associates, The Raine Group, Anchor Capital, Gaingels, Conductive Ventures and Blue Run Ventures; and new backer Santa Barbara Venture Partners. (Jackpocket was founded in New York but also has an operation out of Santa Barbara, CA; that’s where CEO and founder Peter Sullivan is based and was speaking from when I interviewed him for this story.)

Sullivan said the company would not be disclosing its valuation with this round, which brings the total raised by the company to just under $200 million.

For some more context: Jackpocket last raised money only in February of this year, a $50 million Series C round, when it was valued at $160 million post-money, according to PitchBook data. But it has grown since then: its current 2.5 million active user figure is up 300% in the last eight months.

Sullivan said that the idea for Jackpocket came to him in part because of his father, who was, in his words, “a blue collar guy born in Brooklyn who played the state lottery in New York, but was computer illiterate.”

The year was 2012, and one of the big themes in the world of tech at the time was the rise of apps that were bringing previously-offline services into the digital world; another big theme was the surge of interest in mobile gaming. Putting those trends together, Sullivan saw an opportunity to build an app to order lottery tickets — something that typically required people to go into convenience stores that could be done instead from the phone.

“We positioned ourselves as the Uber or Instacart for lottery,” he said.

Jackpocket is part lottery ticket storefront, but also part virtualizer of the whole lottery experience. As Sullivan described it to me, people use the mobile app to order lottery tickets. At the back end, Jackpocket is doing the actual ticket purchasing on the player’s behalf, using proprietary software that it built to take “scans” of each ticket that the player orders. Players can see the ticket, which is watermarked by Jackpocket to keep it unique and authentic.

As with all kinds of other real-money online gaming, Jackpocket is built with various levers so that it complies with different regulations around age, geographical location (you have to physically located in a state where Jackpocket operates in to place an order). This includes using GPS technology to identify users’ locations, but also checks to determine whether people are using VPNs, or are tied to computers via other applications. Players also need to upload identification to verify themselves and their ages.

The company has also made a play for being a more “responsible” player in the gambling world. It monitors user spending and it sets an initial cap of $100 per day, or whatever limit under that amount they choose to set.

Its business model is based on taking a 9% fee on any amounts deposited by the customer. That means, if you put money into the app to buy tickets, you’re charged 9%, but if you use your winnings to play, you do not. Nor are you charged to withdraw money.

All the same, and even with a clear market opportunity (its biggest competition at the time was the fragmented convenience store market) the startup found it very hard initially to raise money.

“It was considered taboo to do real money gaming at the time,” Sullivan said of his experience of knocking on doors in Sand Hill Road in the early days, one reason why the company raised relatively little (around $25 million) before this year’s Series C. “Nine years ago investors wouldn’t talk to us, but I knew lottery would be the key here,” he said. “It is the largest amount of real money gaming, largest net and lightest touch point and it works well cross-selling it to other formats.”

The investment tide really started to turn on the back of the success of companies like FanDuel and other real-money gaming has changed the tune for lottery, and Jackpocket, too. The company cites figures from industry group North American State and Provincial Lotteries that estimate that the total annual spend from consumers on lotteries is $85.6 billion. This is more than the combined spend in several other leisure categories: print and digital books ($1.8 billion), movie tickets ($11.9 billion), video games ($31.5 billion), concert tickets ($10.4 billion) and sporting events ($17.7 billion).

“I saw my dad buy these tickets, but I never knew how big it was,” Sullivan said. And that’s not considering also the changing demographics of lottery ticket buyers captured by Jackpocket, where some 70% of buyers are under the age of 45 years old. “It’s a more tech-savvy and affluent buyer,” Sullivan said, which also plays well into an app-based experience.

The past two years’ particular set of circumstances, meanwhile, has also given a big fillip to companies like Jackpocket, with the consumers who would have previously visited their corner shops to buy items like lottery tickets spending more time at home to socially distance and avoid the spread of Covid-19, and many of those small stores that remained open switching to delivery services, or making it generally less easy to pop in to buy tickets.

The “cross-selling” other formats, as Sullivan describes it, will be an important area to watch. It could be about selling other kinds of lottery-style experiences, but also potentially partnering with the companies like, say instant grocery delivery startups, which are the digital extensions of the convenience stores that have been lottery’s retail bread and butter up to now, or other gaming companies. That potential is one reason to raise so much right now.

“Mobile gaming and lottery is experiencing an exciting and unprecedented level of growth and expansion.  At Left Lane, it’s clear to us that Jackpocket is spearheading this progress and innovating at a pace never seen before in this industry,” said Harley Miller, founder and managing partner of Left Lane Capital, in a statement. “We were invigorated by the opportunity to take part in this historic moment and look forward to supporting Jackpocket’s role in this landscape.”

Updated with a few minor clarifications on spending limits, how Jackpocket works to purchase tickets, and the commission structure.