Instagram earlier this year said it would explore the idea of creator subscriptions and was later spotted developing a feature that would offer exclusive Stories that were only visible to a creator’s subscriptions. Now, it seems, the company is poised to launch creator subscriptions into broader testing. According to two third-party app intelligence services, Instagram has recently added in-app purchase options to its U.S. app that are intended for “Instagram Subscriptions.”

Both Sensor Tower and Apptopia track the mobile app ecosystem, which includes monitoring chart movements, app engagement and gathering app marketing intelligence data, among other things. But they also track the other less noticeable changes that apps tend to make — like rewriting their App Store descriptions, swapping out their screenshots, or — as in this case — adding new in-app purchases to their App Store listings.

Before this, the firm says the only available in-app purchases were the various options for “Instagram Badges.” (Those are the virtual items that fans can buy to support their favorite creators during their livestreams at price points that range from $0.99 to $4.99.) 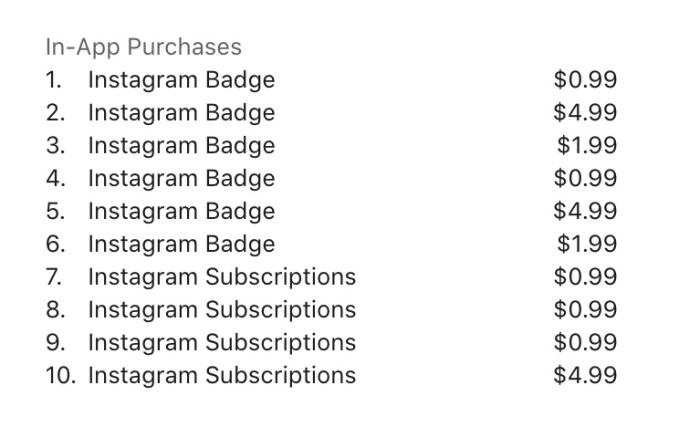 Some Instagram users have spotted the additions as well — social media consultants Matt Navarra and Brian Kofi Hollingsworth in the U.K. both recently tweeted about the new listings for subscriptions, for example.

Typically, Instagram tests new features with a smaller group of creators before making them publicly available. So if it’s launching Instagram Subscriptions to the U.S. in the near future, as these new in-app purchases suggest, you still may not immediately see the option among the creators you follow.

Instagram has been open about its plans to expand its set of creator tools to include things like subscriptions and even NFTs as it works to make its platform more creator-friendly. With subscriptions, the idea is that fans could pay a small, ongoing fee for exclusive access to content from their favorite creators.

The company this summer also was spotted building one potential feature for this coming service, “Exclusive Stories.” This feature would offer paying fans access to Stories that weren’t available to the general public and couldn’t be screenshot, but could be featured as “Highlights” that appeared once a member was subscribed, according to reverse engineer Alessandro Paluzzi, who discovered the work in progress. He also revealed that subscribers would get a special member badge and would gain access to exclusive live videos, based on internal developments he uncovered in the Instagram app.

#Instagram continues to work on the Fan Club feature 👀

Though Instagram hasn’t yet fully detailed its plans for subscriptions, Head of Instagram Adam Mosseri spoke in general terms about the company’s monetization strategy during its Creator Week this June. He referenced three types of creator monetization tools for the platform. One was commerce, which included things like branded content, merchandise and affiliate marketing. Another was ad revenue share. And a third was payment products, including direct payments like tips and badges as well as “gated content or subscriptions,” he said.

“I love those because those give creators a direct relationship with their fans — which I think is probably more sustainable and more predictable over the long run,” Mosseri said, referring to the company’s plans for payment products.

Instagram is not alone in competing for creator talent. In addition to a growing number of startups, crowdfunding platforms and competition from social rivals like TikTok, Snap, Pinterest and YouTube, Twitter in September also launched its own creator subscription platform called Super Follows.