Tinder has already undergone a big revamp with its recent launch of “Explore,” a new section inside the app that will enable more interactive experiences, including the second “Swipe Night” series, real-time chat, interest-based matching and more. Now, parent company Match Group is detailing its longer-term vision for Tinder and Explore, which will expand to include exclusive, shared and live experiences and a virtual goods-based economy, supported by Tinder’s new in-app currency, Tinder Coins. In addition, Match spoke today about its broader plans for a dating “metaverse,” and avatar-based virtual experiences that may later roll out to apps across its portfolio, including Tinder.

In terms of the virtual economy, the first phase of its development includes Tinder Coins, which are already being tested in several markets, including a few countries in Europe, Match said.

Next year, Tinder Coins will become available to global users to make in-app purchases of Tinder’s à la carte products, like Boost and Super Like — tools aimed at helping online daters get more matches. They’ll also be used for new pay-as-you-go products that were previously only available with a subscription, like the See Who Likes You feature. And they’ll be used to incentivize certain behaviors on the app, like encouraging members to verify their profiles or add videos to their bio, for example. 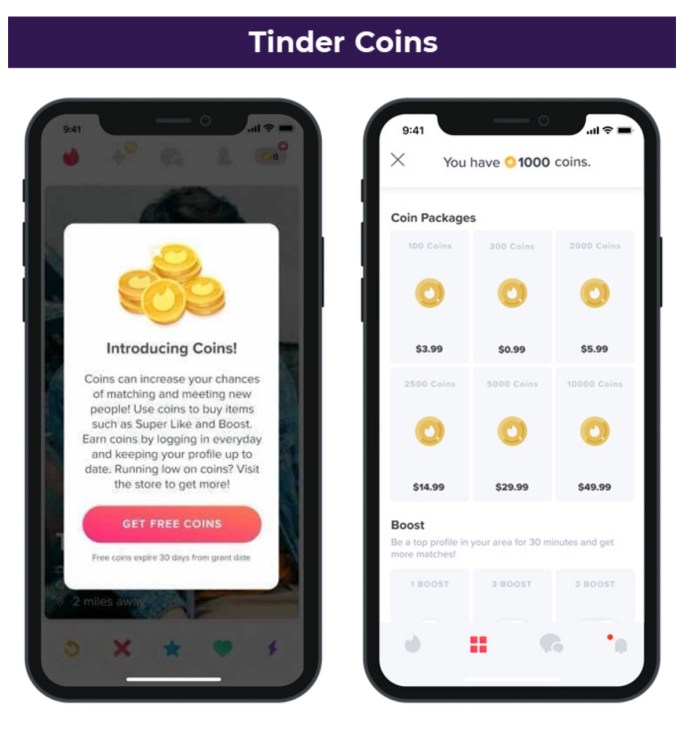 Longer-term, however, Tinder will evolve its app to include virtual goods and a trading ecosystem, which is being planned for 2022 and beyond. This strategic initiative was detailed during Tinder parent company Match Group’s Q3 earnings, including in its Shareholder Letter and on its earnings call with investors on Wednesday morning.

Across its dating app portfolio, Match Group had reported Q3 revenue of $802 million, up 25% year-over-year, and 16.3 million paid subscribers, up 16%. But the company was transparent about the fact that the COVID pandemic has had an impact on its business — lockdowns early in the pandemic had forced a pivot toward virtual experiences. And now, some users are still less inclined to meet in-person, compared with before the pandemic. In addition, citing lingering COVID effects in Asia, Match Group forecasted weaker Q4 growth than expected, with $810-$820 million in revenue instead of the analyst forecast of $838 million.

To address this changing market for online dating, Tinder has leaned into virtual experiences that take place inside the app, instead of only pushing people to get offline for connections. That’s led to the launch of Tinder Explore, and now, it’s driving plans for the forthcoming virtual goods-based economy Tinder has in the works. According to Match Group CEO Shar Dubey, speaking to investors on today’s call, Tinder’s virtual goods will “help users with both self-expression as well as the ability to stand out — particularly in a one-to-many surface area that ‘Explore’ experiences will enable,” she said. “And so the way we envision virtual goods is that it’s something users will be able to collect, as well as give and gift to others.”

Dubey said Tinder in 2022 would be working to design the virtual goods, categorize them, create their value structure and determine where to best showcase the items on users’ Tinder profiles. This will involve testing virtual goods then iterating and refining the product further, based on those tests. Despite the work that still needs to be done, the exec was optimistic about this plan.

“If we get this right, I do think this could be a multi-year revenue vector for Tinder, which doesn’t exist today,” she said.

In addition to developing a virtual goods economy inside Tinder, Match Group also spoke to its larger plans for leveraging Hyperconnect, the Seoul-based social app maker it acquired for $1.73 billion earlier in 2021. So far, Hyperconnect has not performed as well as expected, in part due to COVID and in part due to other issues — including marketing performance and product delays, the company admitted.

But Match still believes in Hyperconnect’s long-term value to its business, Dubey said.

She talked specifically about Hyperconnect’s test of an avatar-based dating app and “metaverse” experience called Single Town, where users interact using real-time audio and meet each other in virtual spaces, like a bar, where they have live audio conversations. Users can express interest in one another in the virtual world, then choose to connect privately to continue their conversations.

“It is metaverse experiences coming to life in a way that is transformative to how people meet and get to know each other on a dating or social discovery platform, and is much more akin to how people interact in the real world,” Dubey said of the test.

This type of interactivity is something Match Group eventually wants to leverage across its portfolio, the company said.

“This next phase of dating apps, in particular, is going to be all about richer, more organic and more akin to real-life ways of discovering, meeting and getting to know people. Technology is finally getting there. And this underlying technology platform Hyperconnect has built that powers Single Town has been built in a way that it can be leveraged by other platforms easily,” Dubey noted, but without naming which Match-owned apps she had in mind.

However, it seems a metaverse-like platform for dating could later tie into something like Tinder’s virtual goods economy, though the company didn’t state this was the plan. But based on current social trends, it’s obvious how a dating app’s users could one day buy items to accessorize their avatar or buy gifts for other users, which are purchased with virtual currency — much like in other “metaverse” platforms, like Roblox, Fortnite or within Meta’s (Facebook’s) Horizon.

In its Shareholder Letter, Match Group only hinted toward the possibilities for this dating metaverse and the experiences it creates.

“This new experience provides a glimpse into how metaverse experiences could be applicable to dating and it is the sort of innovation that will help us evolve our portfolio as we enter the next phase of dating,” the letter stated.

“We’re still very optimistic about the long-term prospects for Hyperconnect,” explained Match Group CFO and COO Gary Swidler, on the call. “It can contribute extremely significantly to the long-term growth of the overall Match Group. There’s many ways that we can do that. We think that we can leverage video, audio, AI capabilities that they’ve got, things in moderation, and safety. There’s a number of things that we’re working very hard at leveraging,” he continued.

“The new metaverse elements and the experience that we’re seeing in that beta test — that is something that potentially we can build into either standalone app and/or potentially leverage that user experience into some of our apps in the portfolio,” Swidler said.