Whimsical, a startup creating tools for workplace collaboration, announced Tuesday its first funding round, a $30 million Series A investment led by Accel.

The company was founded by Kaspars Dancis in 2017 when he saw that the tools most people use for work — the documents, spreadsheets and slide decks — were not conducive to the way people were working, for example, increasingly remote.

The idea for the company originated over 20 years ago when Dancis, who is from Latvia, started his professional career and was working in California, but corresponding with peers around the world.

“I always worked in some form of distributed organization with a larger engineering theme of people everywhere trying to make it work,” he told TechCrunch. “I felt some of the technology was evolving and getting better, but there were still parts of work that if you tried to be distributed, it felt like not being in the same room was a disadvantage.”

The company’s goal is to make distributed work better than being in the same room by focusing on content and collaboration, something Dancis said existing tools have, but are still siloed in a way that you would have to drop something in another tool in order to share it.

As its name suggests, Whimsical aims to make work collaborative, distributed and quick, enabling teams to create and share flowcharts, wireframes, mind maps, sticky notes and documents without having to open another tab or website.

The funding follows four years of bootstrapped growth and profitability, Dancis said. This includes three times revenue growth in the past 12 months and acquiring a couple million total users at companies like Intercom, Netflix and Twilio.

Whimsical built itself in an organic way during that time and got early traction, which enabled it to continue building products. The company remained a small team for years, only growing from 12 to 30 in the past few months, Dancis said. 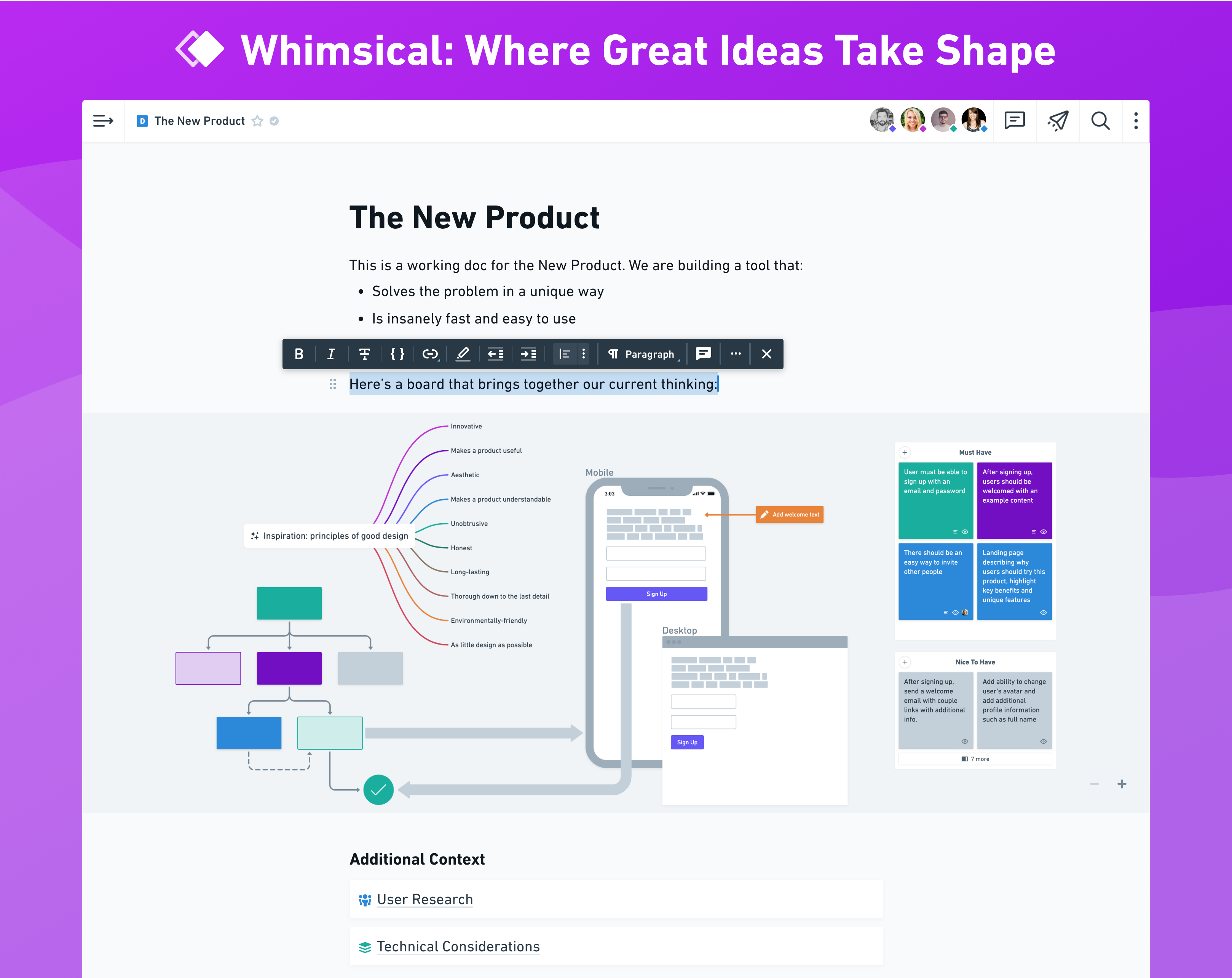 Then in 2021, he felt the company “reach a milestone inflection point where being bootstrapped was working, but was slowing it down.” In order to get to the next level, he needed partners to be able to invest more in the product and its go-to-market strategy. This is as the global productivity management software market was valued at $42.6 billion in 2020 and is poised to nearly triple by 2028, according to Grandview Research.

“We are achieving the vision of an integrated experience and still have some building blocks to create,” Dancis added. “We have this content that can be broadly described as a whiteboard and early this year introduced Docs, but there are some we want to add and also focused on creating a spreadsheet experience, but we want to do it in a way that it will be integrated with everything else we’ve created.”

He felt Accel was that partner, along with Basis Set Ventures and angel investments from dozens of company executives, including those from Dropbox, Stripe, GitHub and Google, that joined in on the funding round.

Accel partner Daniel Levine said he first began hearing about Whimsical a few years ago and officially met the team in 2020. He took it as a sign that sophisticated companies were already customers and the people who used the tools were passionate about doing so.

While many tools like Figma and Slack were built with communication and collaboration in mind, Levine said when teams went fully remote, they had to be adapted as people tried to do remote better.

One of the challenges that emerged was that people wanted more particular tools that were tailored toward collaborative work, which he said Whimiscal solved.

“When I met Kaspars, I thought he was really thoughtful and sharp,” he said. “Whimsical feels like it has a simple vibe, but when you go deeper around these tools, you see they are built for the 80% of people that want to do things super quick. Whimsical was tailor-made for a particular case and we will see more dedicated tools like that in the future, but the company is ahead on this.”