Following its billion-dollar valuation earlier this year, Axiom Space, builder of the next International Space Station, recruited Google’s Tejpaul Bhatia to become its first chief revenue officer, responsible for the growth and monetization of the space ecosystem.

Introduced to Axiom in 2017 while serving as executive in residence at Citi Ventures, Bhatia invested in the company as an angel investor in 2020 after it landed its $140 million contract with NASA. He then joined as part of the leadership team in July. 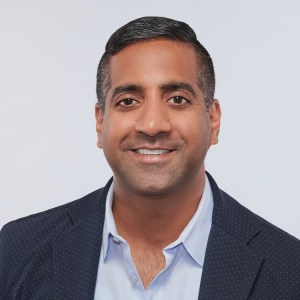 But Axiom is not the only space pioneer in the universe. With $400 million in NASA contracts up for grabs, a gold rush is on for space ventures to set up shop in Sky City.

More than a dozen contractors have thrown their hats into the ring, with two announced last month. On October 22, Lockheed Martin, in a partnership with Voyager Space and Nanoracks, submitted a bid to launch its Starlab space station by 2027, and on October 25, Jeff Bezos announced Blue Origin’s plan to partner with Sierra Space and Boeing to launch its Orbital Reef space station between 2025 and 2030.

For Axiom’s part, NASA approved the Axiom Station to be built in stages while attached to the ISS to ensure a seamless transition from the ISS being decommissioned in 2028.

The first module, Hub 1, is slated to dock in 2024 and will include research facilities and living quarters for four crew members, with a touchscreen communications panel and a large window. A second module, Hub 2, with similar amenities, is planned for 2025. A microgravity lab will follow in 2026. Then in 2027, a Power Tower with solar arrays will attach to the three modules and form Axiom Station, which will double the capacity of ISS. In 2028, Axiom Station will detach and begin to self-orbit.

TechCrunch talked with Bhatia about his ambitions over the next seven to 10 years to build a massive industrial complex in low Earth orbit that will not only serve as a WeWork for off-planet retreats and a research hub for brands and institutions, but also a way for smaller nations to set up their own space program.

Taking a page out of Google’s playbook, this is how he plans to monetize the final frontier. 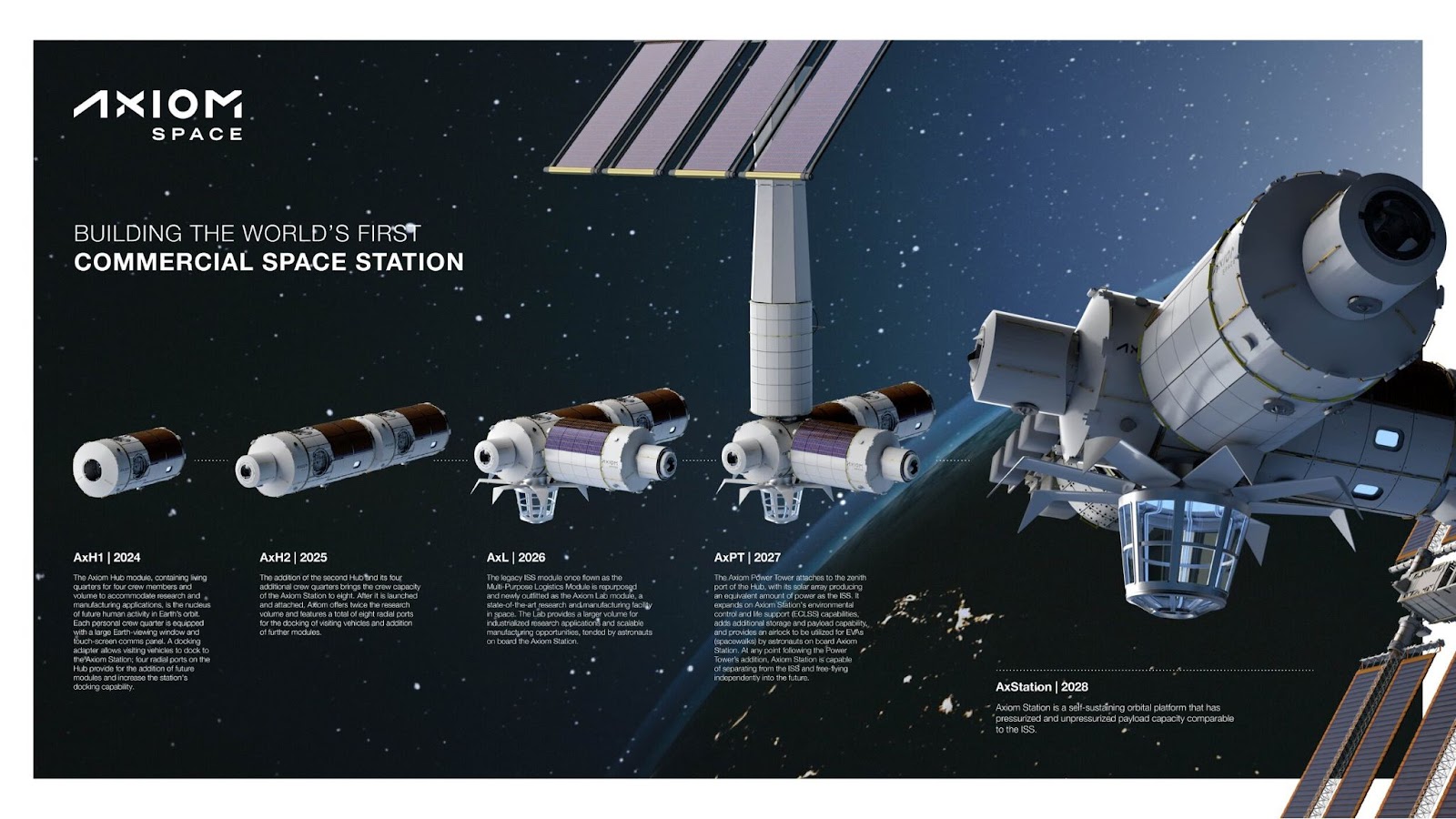 Axiom Space was founded in 2016 by former International Space Station manager Michael Suffredini and Intuitive Machines co-founder Kam Ghaffarian. It has raised a total of $150 million, having closed a $130 million Series B round led by C5 Capital in February, with its lead investor, former Blue Origin president Rob Meyerson, taking a seat on the board. The company has more than 300 employees headquartered in Houston.

Axiom’s main source of revenue comes from being an end-to-end mission provider of short-duration stays on the ISS. That means it packages astronaut training and round-trip transport on SpaceX (which includes food, water, oxygen, communications, data, power and other essentials) and sells to private citizens an all-inclusive stay of seven to 10 days. It also sells research missions for experiments to be conducted in the ISS microgravity lab, and has begun to sell content and media sponsorships.

Two missions are planned for next year. Retired NASA astronaut and Axiom VP Michael López-Alegria will lead its first, Ax1, which is scheduled for February 21. Investors Larry Connor, Mark Pathy and Eytan Stibbe will serve as crew. The Washington Post reported the ticket price to be $55 million per passenger.

Its second mission, Ax2 is planned for later in 2022, and will include retired NASA astronaut Peggy Whitson, who holds the American record for most time spent in space, and John Shoffner, American investor, racing car driver and pilot. Two seats are still available on this trip, but Axiom would not confirm whether Tom Cruise, who is working on a $200 million Universal film with Elon Musk and is rumored by NASA to be going up, is on that flight.

Its third and fourth missions are being planned for 2023, and one will include the winner of its Discovery Channel competition reality TV show, “Who Wants To Be An Astronaut?”

Axiom’s competitors in this sector include Space Adventures, co-founded in 1998 by BOLD Capital’s Peter Diamandis. The company has transported seven private citizens, including Cirque du Soleil co-founder Guy Laliberté, to the ISS through the Russian space agency Roscosmos. Its second scheduled mission to the ISS in 2023 will be a space walk. It had an orbital trip planned on SpaceX later this year but cancelled it due to low demand, according to SpaceNews.

Despite the hype, the past few months around billionaires Richard Branson, Jeff Bezos and Elon Musk taking private citizens, including Star Trek’s William Shatner, on joyrides to the edge of space, the market is limited for those who can afford the ticket price.

Fortunately for Axiom, billionaires are not their target market.

Although it may not look like “The Jetsons,” with space cars zipping around celestial buildings aglow with neon lights, things are going to get a lot more interesting come 2024 when Axiom docks its first habitat on the ISS.

Bhatia said the extra crew quarters and lab facilities will enable Axiom to offer more missions since it will no longer be subject to ISS capacity constraints. As demand dictates, Axiom is also open to working with other rocket providers like SpaceX, including Boeing’s Starliner, once approved.

Bhatia sees 2024 as a key inflection point for revenue growth.

“Once Axiom station comes on, we will have a hybrid model where companies, institutions and governments can custom build, buy or lease physical and digital space,” he said.

“The cool thing about our physical space is that the modules, which can be a lab, data center or habitat, can undock, fly around and reassemble like Legos.”

But Bhatia shuddered at the thought of it being called a space hotel, where rooms can be booked off an app. He sees Axiom station as a massive industrial space complex with prospective customers ranging from governments seeking to build their own space programs to companies and institutions in need of microgravity laboratories and colocation manufacturing facilities.

“We offer physical space that includes the food, water, oxygen, life support systems, bandwidth, data, insights, edge computing, communications, power — things that have to happen in orbit that every business, institution or government would need to operate,” he said.

“But even more exciting is we can also offer our digital platform which we are selling as infrastructure-as-a-service where developers can use the sensors and other instrumentation onboard to create businesses, similar to how developers use the sensors of the iPhone to create apps.” 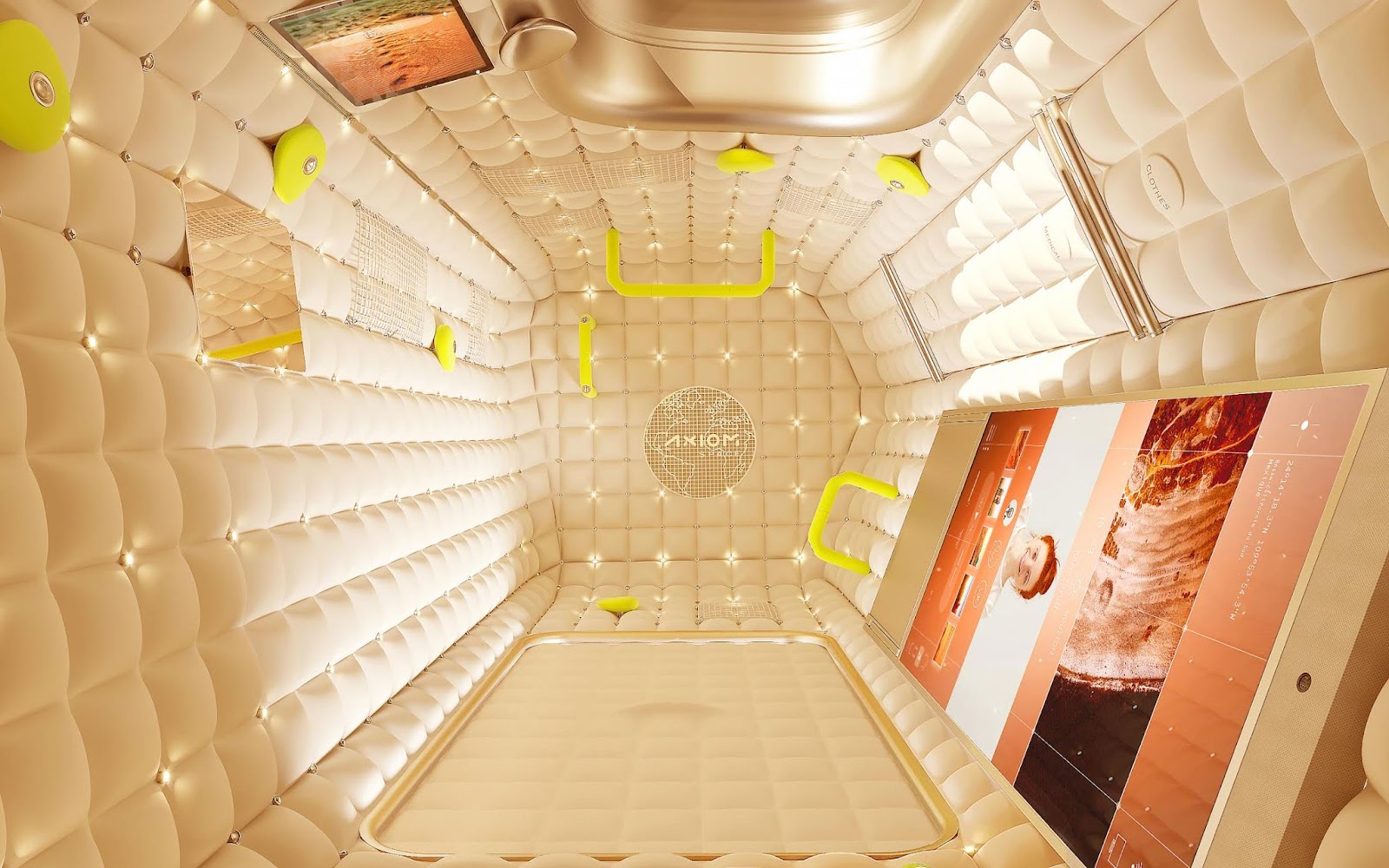 Whether Bhatia will actually create a software development kit to allow third-party development of the Axiom Station operating system remains to be seen, but he did say good uses of the station’s sensors could include monitoring of space debris and Earth’s climate.

As for the total addressable market, Bhatia measures it as countries that have budgets for space programs and those that haven’t yet been able to afford one.

“Our goal is to ensure that there isn’t a gap — that once ISS reaches its end of life, there is a full service, fully functioning private station for everyone,” he said. “Whether a country has a budget of billions of dollars or a fraction of it, we can create a solution to meet their needs.”

Bhatia is hoping that NASA, ESA, JAXA, Canadian Space Agency and Roscosmos move their $2 billion to $3 billion annual revenue spend to Axiom Station, as the successor to ISS. Longer term, he expects Axiom to be servicing a multibillion-dollar market, referencing a Morgan Stanley report that pegs the commercial space sector at $350 billion in 2020 and $1 trillion by 2040.

It takes a Googler

“As chief revenue officer my mandate is to create a hyper growth business platform that will serve as a launchpad for businesses, industries and markets to scale exponentially over the next seven to 10 years,” he said. “That’s a very different model than how the space industry has operated to date as a government taxpayer endeavor. The private sector is far better suited for the task.”

As for competition from Starlab and Orbital Reef, Bhatia says he welcomes it and is confident that Axiom is years ahead. 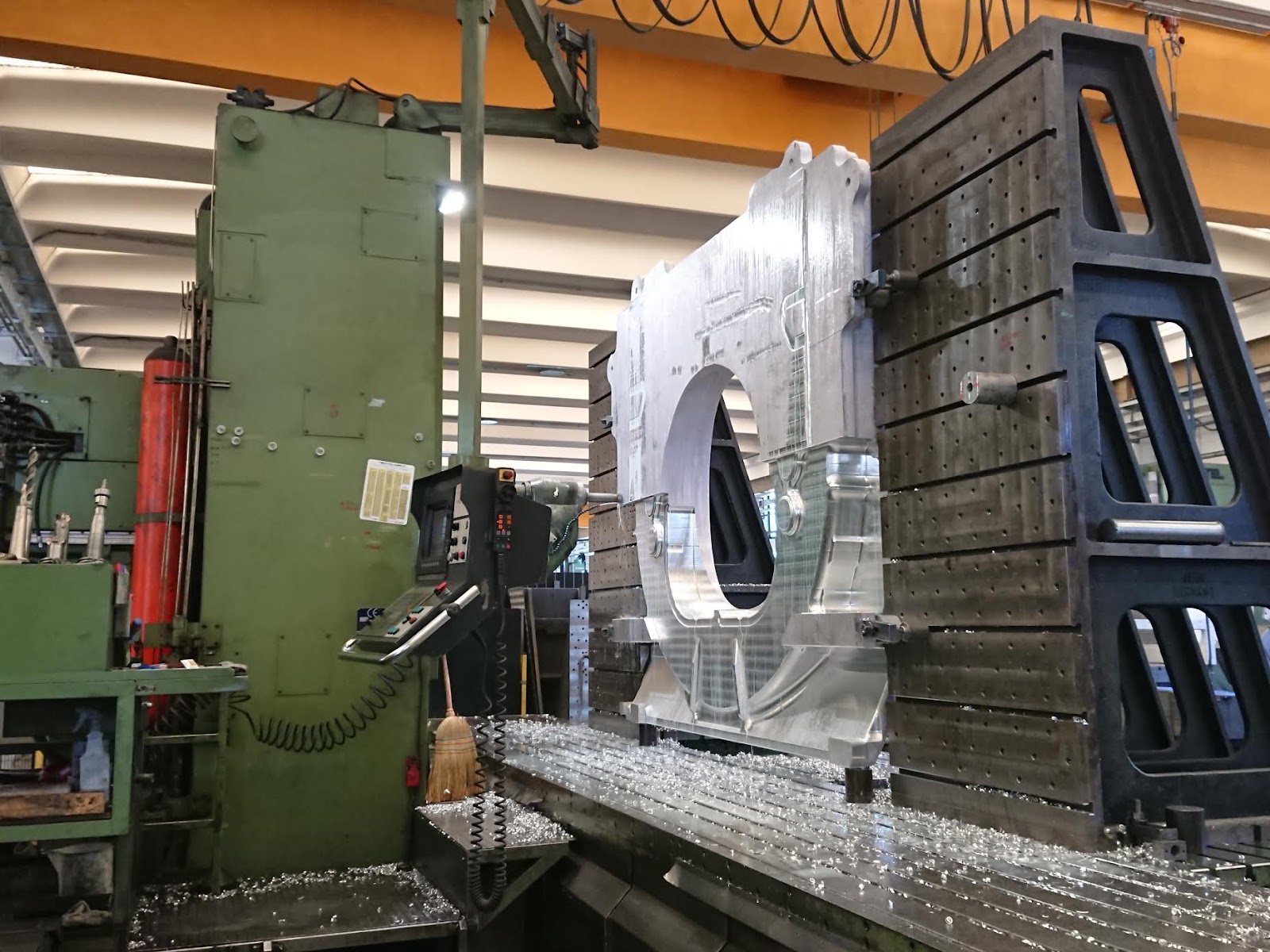 “I’m a little over 100 days on the job and see it’s not theoretical — metal is being bent, people are going up, contracts are being signed,” he said. “Our first module is already under construction at our Thales Alenia plant in Italy. This is not science fiction. It’s really happening.”

And for the time being, he’s not worried about profitability.

“Fundraising is very important and we’re following the model of the five most valuable companies in the world — Facebook, Apple, Amazon, Microsoft and Google — which operated at a loss when they first started out. We are trying to create as much shareholder value as possible and taking capital to build essential infrastructure and innovate at speed while staying focused on safety.”