After early tests in select markets, Netflix announced today its debut lineup of exclusive mobile games will begin rolling out to all members globally on Android devices, starting this week. In July, the streaming service first confirmed its plans to enter the mobile gaming market, calling games “another new content category” for the company to offer its subscribers, alongside movies and TV. Since then, Netflix has made available to members a growing number of free games with no ads or in-app payments — including a mix of both casual games and those centered around its popular original TV series, “Stranger Things.”

Netflix had been expanding its investments in gaming for some time. At the E3 gaming conference back in 2019, Netflix detailed a series of gaming integrations across popular game platforms like Roblox and Fortnite and plans to bring new “Stranger Things” games to the market. On mobile, it then began working with the Texas-based game studio BonusXP on the game, “Stranger Things: The Game,” which has since been rebranded to “Stranger Things: 1984” to differentiate it from the follow-up title, “Stranger Things 3.”

These two games also became the first titles to be tested within the Netflix Android app when the company began marketing its games in Poland this August.

And just last month, TechCrunch broke the news of Netflix’s gaming expansion with the launch of three new casual games — Frosty Pop’s “Shooting Hoops” and “Teeter Up” and  Rogue Games‘ “Card Blast” —  to Netflix subscribers in Spain and Italy, in addition to Poland.

Now this full lineup, including the two “Stranger Things” games and the three casual games, will become available to all members globally on Android.

To access the titles, users will tap on the new Games tab in the Netflix app for Android where the games are listed. After selecting a title, users are directed to the Google Play Store to install the games, as you would any other app. However, to sign in and play the game, a Netflix membership is required.

After being downloaded, the games will be available to play at any time by tapping them within the Netflix app or on the home screen of their Android device. 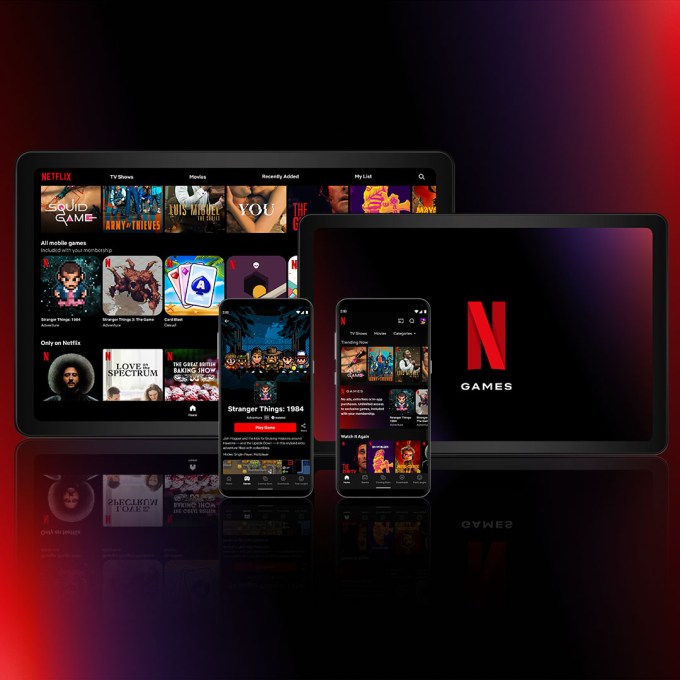 During tests, the games were only available to Android smartphone users. With the global launch, they’ll now become available to members with Android tablets, too, Netflix says. Here, the games will also be featured in a new games row (pinned to position 6), and they’ll be found in the Categories drop-down menu in the Netflix app.

The company tells TechCrunch the new games will become visible in the Google Play Store starting today, but their rollout to the Netflix Android app will begin on Wednesday. It may be several days until that rollout completes and all Netflix members in global markets are able to access the games.

Netflix doesn’t have any plans at present to monetize the games directly. Currently, the titles are free to download, free from advertising and don’t include any in-app purchases. Instead, the company sees games as a means of growing and maintaining its existing subscriber base. If you download a game but are not a Netflix member, you’ll be directed to create a Netflix account on the web, for example. (This could also be seen as another way to route around the app stores’ commissions on in-app purchases).

During its Q3 earnings call with investors, Netflix COO and Chief Product Officer Gregory Peters explained Netflix’s interest in gaming was about meeting its members where they are. He revealed that the “vast majority” of subscribers engage with the service on a mobile device. That requires offering a different set of experiences beyond just long-form video content. On this front, Netflix also this year launched a TikTok-like short feed of comedy videos called “Fast Laughs” on mobile, which serves a similar purpose of expanding the type of content available under the Netflix umbrella.

The company’s efforts in mobile gaming are still “incredibly early,” Peters cautioned on the call.

“Mostly what we’ve done to date is about essentially making sure that all of our systems are working as we expect. So it’s really about proving to ourselves that we can do the delivery in a way that we want,” he said, referencing the early mobile gaming tests. But longer-term, Netflix sees potential in being able to personalize suggestions of games to play to its members, the way its algorithms today suggest new movies and shows to watch, he said.

“The same thing that’s made our service very powerful for recommending movies and TV shows,” Peters continued, “connecting great content creators to this audience — that’s the capability that we need to build on the game side now, as well,” he noted.

The company says it plans to roll out downloadable games to iOS users in the “coming months.”

This, though, may prove to be a bit more difficult than on Android, due to Apple’s stricter App Store rules, which generally prevent apps from hosting other apps and games.

However, Apple last year did update its rules to allow game-streaming apps to offer a “catalog app” where customers subscribe to a service that then links out to the individual gaming titles the subscription offers, which may include games from multiple publishers. Though intended for services like Xbox Cloud Gaming and Google Stadia, a third-party app catalog offered via subscription by GameClub was the seeming inspiration for the policy as it offers a hub to subscribe to a series of downloadable titles.

Netflix’s catalog could work under these guidelines, too — as long as potential subscribers were pointed to the main Netflix app to sign up, giving Apple its cut.

The company says the games rollout to Android will begin on November 3 at 10 AM PT / 1 PM ET.