More of the world’s economy is moving online, and that is underscored by the long list of recent fundings and acquisitions in the digital ID authentication and anti-money laundering (AML) space, including Okta’s $6.5 billion acquisition of Auth0. Today, another startup announced it has raised capital: end-to-end due diligence platform First AML.

Blackbird Ventures (which is also one of First AML’s users) and Headline led a $21 million (about $29.2 million NZD) Series B in the New Zealand-based company, with participation from returning investors Bedrock Capital, Icehouse Ventures and Pushpay founder Eliot Crowther. This brings First AML’s total raised to about $30.1 million USD (about $42 million USD).

Founded in 2017, First AML entered Australia this year and will use part of its Series B to expand into international markets, starting with the United Kingdom. It is also looking at Singapore and the United States. The company also plans to double its employee count from 90 to 180.

One of the main ways First AML is different from other digital ID authentication startups (like Jumio, Onfido or ForgeRock, to name a few) is that instead of individual end users, it focuses on complex entities and transactions, which may mean performing due diligence on multiple organizations and people at a time. Unlike many other authentication and KYC (know your customer) startups, its main clients aren’t banks. Its clients include other types of financial service providers, accountants, law firms and real estate agencies.

“We haven’t focused on working with banks because there are a lot of medium-sized enterprises in the economy that also need to comply with AML rules,” co-founder and chief executive officer Milan Cooper told TechCrunch. “Many people focus on banks because those are the big guys, but the smaller law firms and investment firms, they need to comply as well. What we’ve found is that they don’t have the resources to invest in internal teams to set up a really sophisticated compliance process.”

First AML’s founding team, which also includes Bion Behdin and Chris Caigou, wanted to launch the startup because two of them (Cooper and Caigou) were former corporate bankers and “saw the pain of AML onboarding firsthand context and how it would slow down transactions,” Cooper said.

For example, compliance teams needed to contact multiple stakeholders for documentation, and often had to follow up because the wrong paperwork was sent. “The KYC process is so cumbersome and it was not a good customer experience trying to onboard, so we saw an opportunity to streamline it and remove friction.”

The company’s proprietary platform seeks to automate as much of the compliance process as possible, such as ID verification (including biometric identification for remote verifications) and visual tools that help clients understand company ownership structures. 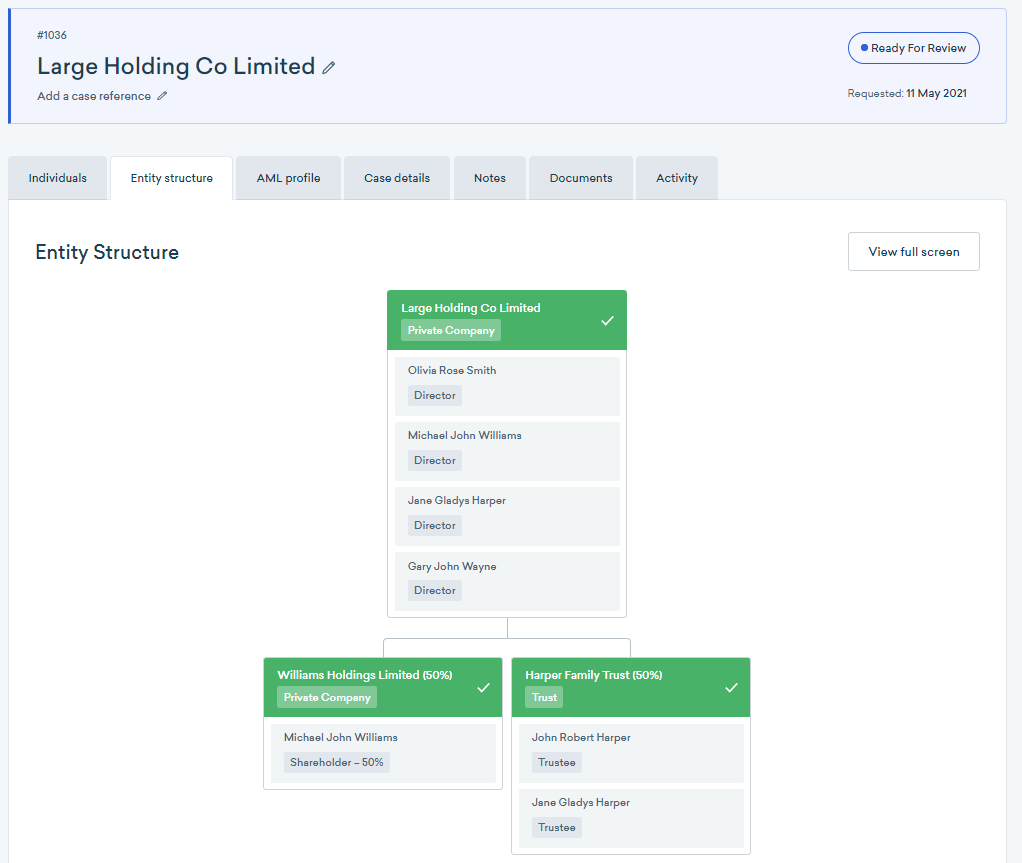 “We take on the full KYC process end to end, and importantly, we do it for complex customer entities like companies and trusts. This is where many of our competitors don’t offer a full end-to-end solution,” said Cooper. “They might offer a solution for identity verification of a single person, whereas we are taking that whole process off their hands, which includes digging through the layers of a complex entity to understand who the beneficial owners are and coordinating the data collection process from multiple beneficial owners.”

For example, law firms that need to comply with AML regulations use First AML to conduct KYC on potential clients, which may include companies with multiple shareholders, directors and subsidiaries, which all need to be checked. Meanwhile, investment firms turn to the platform to onboard new investors, including trust structures and other types of complex entities.

Many of First AML’s clients previously relied on manual email and paper-based processes that often required people to send notarized copies of documents like passports or utility bills. First AML’s platform starts by analyzing an entity’s structure. Then it pulls data from public sources and obtains information from non-public sources.

“Essentially we figure out what’s going on in these complex entity structures, which are very prevalent in financial and other sectors, and then the platform facilitates data collection from multiple stakeholders within that complex entity, including biometric ID verification, and uploaded documents,” Cooper explained.

First AML is also building a database, which currently has more than 350,000 verified entities. If an entity onboards through its platform and is involved in other compliance procedures, First AML can get their consent to retrieve their previous verifications. This means they don’t need to go through the full AML process every time they do a transaction. “It’s a key differentiator for us and a key competitive advantage that will really speed up the way KYC happens in the future,” Cooper said.

Cooper said the recent publication of the Pandora Papers, an investigative report that revealed the hidden offshore accounts of 35 former and current world leaders, has increased concerns about AML compliance.

“Our take is that there is still a lot of shady transactions going on in the global economy and the Pandora Papers have revealed that there is a lot of money going around and tax evasion occurring. For us, this is a signal to governments that AML laws are needed in many countries,” he said. “Australia is still behind some of the rest of the world in terms of introducing AML rules into new sectors like legal accounting and real estate. The U.S. is another example where it’s the financial sector that’s captured, but non-financial sectors are not. It puts more pressure on lawmakers to clamp down on these illegal activities.”

In a statement about the investment, Blackbird Ventures partner Samantha Wong said, “We heavily rely on First AML. This is what is special about this deal—how intimately connected we are to the customer pain point, our love for the product roadmap and the network effects that emerge as their business model goes global.”