Canalys reported today that worldwide PC sales fell 2% in the third quarter, but perhaps the most startling data point in the latest PC market survey was that Chromebooks sales were cut in half from 18% of total sales last quarter to just 9% in this one.

The good news for the market in general was that with over 122 million units moving in the quarter, these numbers were still above pre-pandemic levels, but there are some storm clouds on the horizon as overall supply chain issues could complicate things for PC manufacturers in the coming quarters.

Overall Chromebook sales were down 37% year-over-year as the pandemic-induced sales frenzy finally slowed down, with 5.3 million units being sold. The Chromebook numbers reflected the doldrums in sales with top Chromebook retailers taking huge hits. The top vendor Lenovo was down over 20% year-over-year, while HP in second place lost a whopping 66% and Acer in third place was down over 28%.

Canalys speculated this had more to do with market saturation than parts shortages or other supply chain issues. “The Chromebook market was hit by a massive downturn, with a 37% year-on-year fall in shipments (52% quarter on quarter) in Q3. This comes as major education markets such as the U.S. and Japan reach saturation point, with public sector funding of digital education programs slowing,” according to the firm. 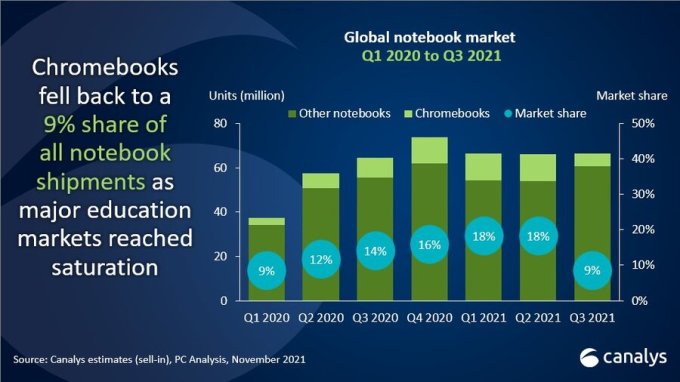 Meanwhile, tablet shipments dropped 15% year-over-year, with sales down in every region except Asia-Pacific, which bucked the trend with sales up 23%. Compare that with North America where sales were down 24%.

Apple held onto the tablet market share lead with 40% of the market, up from 34.4% in the year-ago time period, but it wasn’t as good as it sounds, as they sold almost exactly the same number of units as last year, meaning they had 0% growth. Samsung market share was down a tick from 20.4% a year ago to 19.1% this quarter, but sales dropped steeply, down over 20% over last year. Lenovo came in third with 11.3% share, up from 9.5% a year ago, and good for modest 2% growth.

Overall PC sales told a bit better story with top vendor Lenovo up 4.1%, Apple in second up 4.6% and HP coming in third in the negative column down 5.7%, with the company especially hard hit by the drop in Chromebook sales.

Brian Lynch, a research analyst at Canalys, says the holiday shopping season may bring some relief in spite of supply chain issues. “Sales will improve in Q4 QoQ despite supply chain issues, largely due to holiday-related consumer demand around the world. This will come via lower-cost, less material-intensive devices. Consumers tend to buy less powerful devices putting a lesser strain on component manufacturers,” Lynch told TechCrunch. That said, the firm expects relatively static performance in Q4 in terms of YoY growth, and then marginal, steady growth in 2022 and the years following.

It’s worth noting that Canalys counts sales into the channel, rather than sales to end customers, for its market survey methodology. That means it’s counting units it sold to a company like Best Buy or Staples, rather than to a consumer end user.