When the Beats Fit Pro first leaked, I had my misgivings. Design-wise, they more or less look like the Studio Buds the Apple subsidiary released over the summer, with one major difference: wings. Wings, wingtips, eartips, fins, whatever you call them, I hate them. I respond viscerally to the sight of them, in fact — weird little pointed things you’re meant to jam into your ears.

Now, I admit that much of this is a holdover from testing workout headphones some years back. In those days, wings were, to a fault, hard plastic things that were every bit as pointed as they looked. And while I can appreciate from a stability standpoint how such a feature works during, say, a long run, I largely try to avoid putting pointy things in or near sensitive parts of my body — except when absolutely necessary. 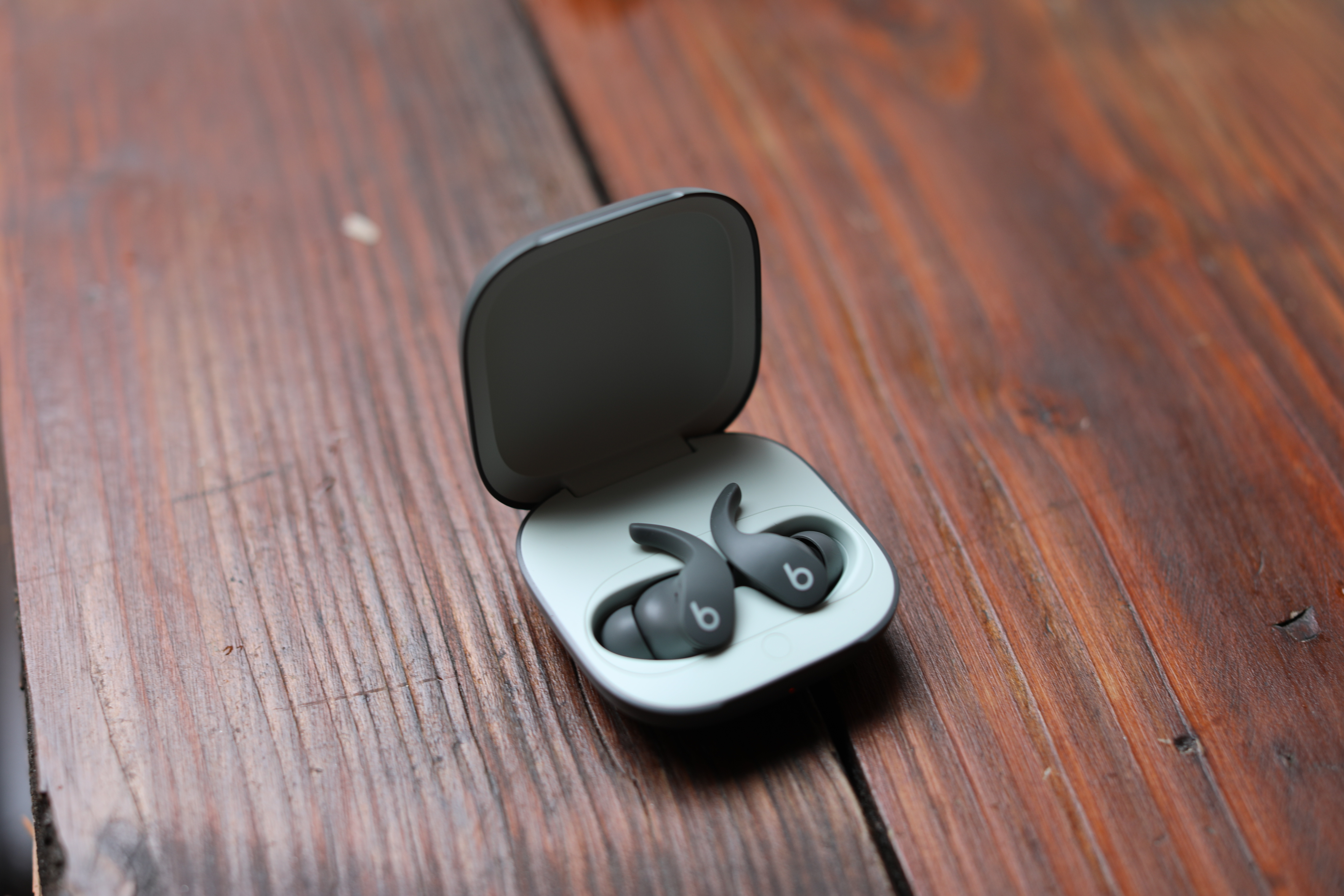 In spite of my initial hesitancy, I’m happy to report that my concerns were overblown. The Fit Pros are comfortable. Like surprisingly so. The buds themselves are fairly small, with the eartips adding wingspan to the design. They’re not unlike the Powerbeats Pro in that respect, but they’re able to accomplish their task with significantly less plastic. The key to the tips’ success is their size and shape and, equally important, the fact that the silicone they’re made from is malleable, meaning they keep things still without digging into the surrounding cartilage.

I’m going to stop short of calling them the most comfortable earbuds I’ve tested. Honestly, that distinction probably belongs to their older sibling, the Powerbeats Pro. While that design is big and somewhat unwieldly, the over-the-ear displaces the weight and pressure of the buds. And while the Fit Pros only weigh 11.2 grams, that can still wear on you after extended periods.

They also do an admirable job keeping things in place. I took up running again recently, and have been trying all sorts of earbuds (with limited success). When we think about keeping headphones in place while working out, we (I think understandably) tend to focus on physical movement. What we tend to ignore is how that combines with sweat, making it both difficult to keep the buds in place and hard to fumble to adjust them. 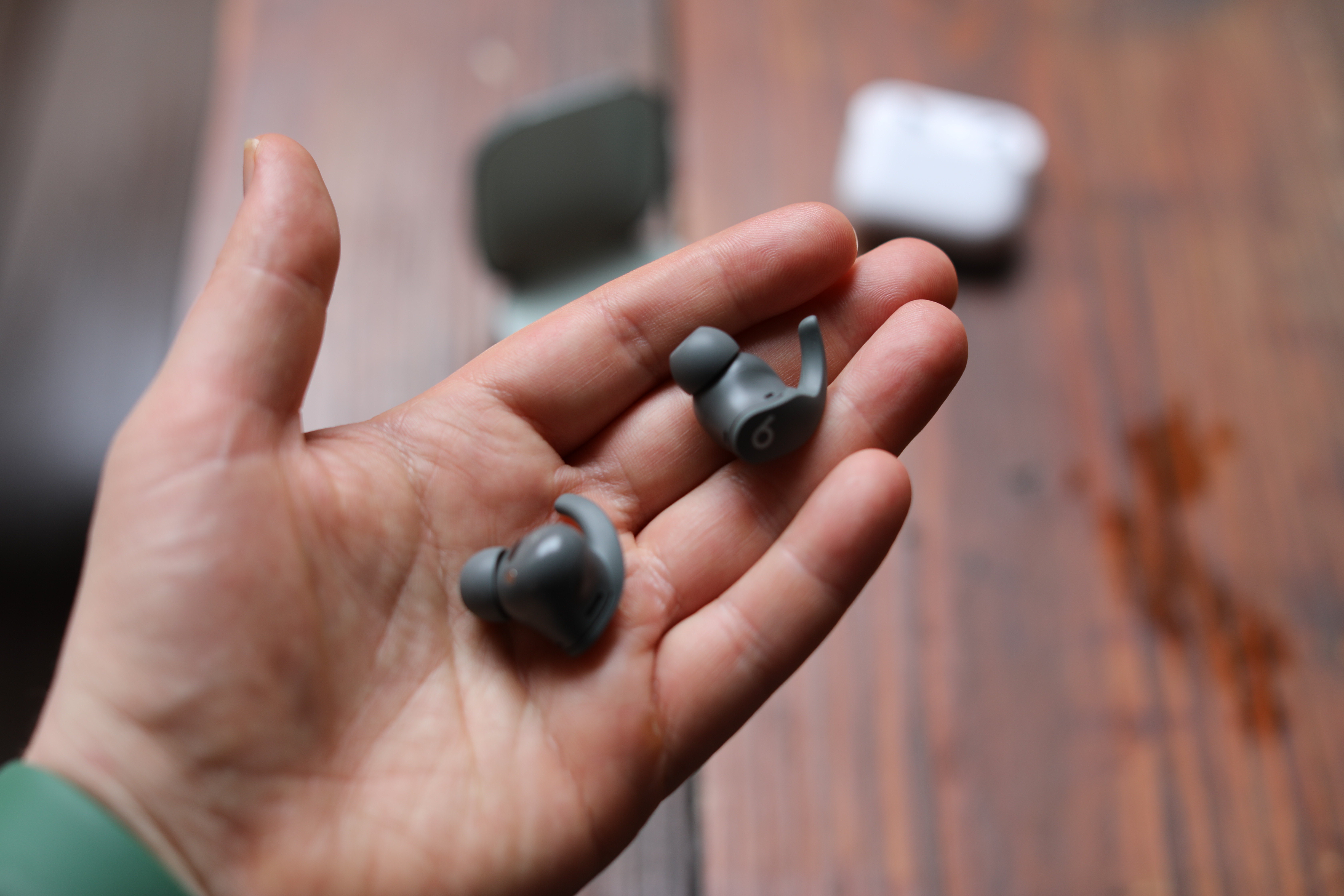 The Fit Pro excelled there better than any other buds of recent vintage on this front. If you’re primarily looking for a pair of gym buds, these are hard to beat (so to speak). The wingtip meets the bud to form a physical button. It’s meant to be pressed at the edge furthest from the tip. Pressing in the middle will apply more pressure to your ear. A single press will play/pause/answer a call, double skips a track forward, three goes back and a long press toggles between ANC and transparency modes.

These sorts of physical buttons are necessary for workout headphones. Touch gets a bit tricky when you sweat. The biggest downside on this front is that the relatively small size does result in some accidental button presses if you need to adjust them while working out. But even so, they’re well ahead of most earbuds for this purpose. It’s also a nice change from Studio Buds, which I found extremely difficult to keep in place while going for a run. 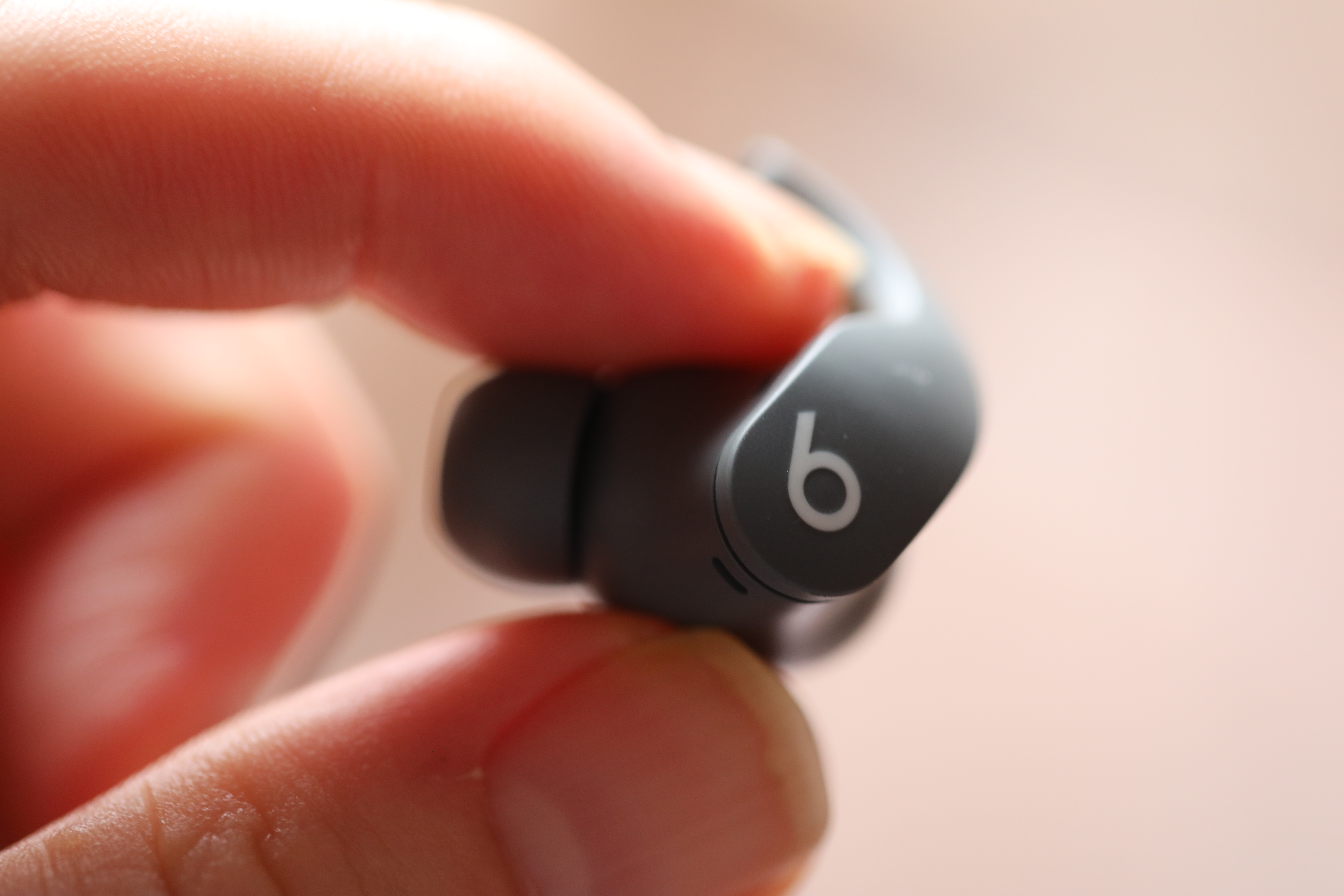 It’s worth noting that the wingtip’s attachment to the button means it’s not removable or user-replaceable. That’s a bit of a bummer. It would be great to be able to take the tips off when a workout is over, though likely that would compromise their structural integrity — and it’s just another thing to possibly lose. But if the wingtip gets damaged, you’ll need to send the whole thing back (if under warranty). Apple/Beats isn’t selling that bit separately.

The sound is good here — pretty similar to what you get on other Beats. That is to say, it’s bass-heavy. If you’re looking for a pair of buds for, say, enjoying the subtle nuances of jazz, I’d recommend something from Sony. These are more “let’s toss on a pumped-up playlist and go for a run” headphones — and there’s certainly a place for that. Active noise canceling is excellent, as well. It did a good job blocking out ambient street noise and bad gym music, especially when I swapped in a large pair of silicone tips. 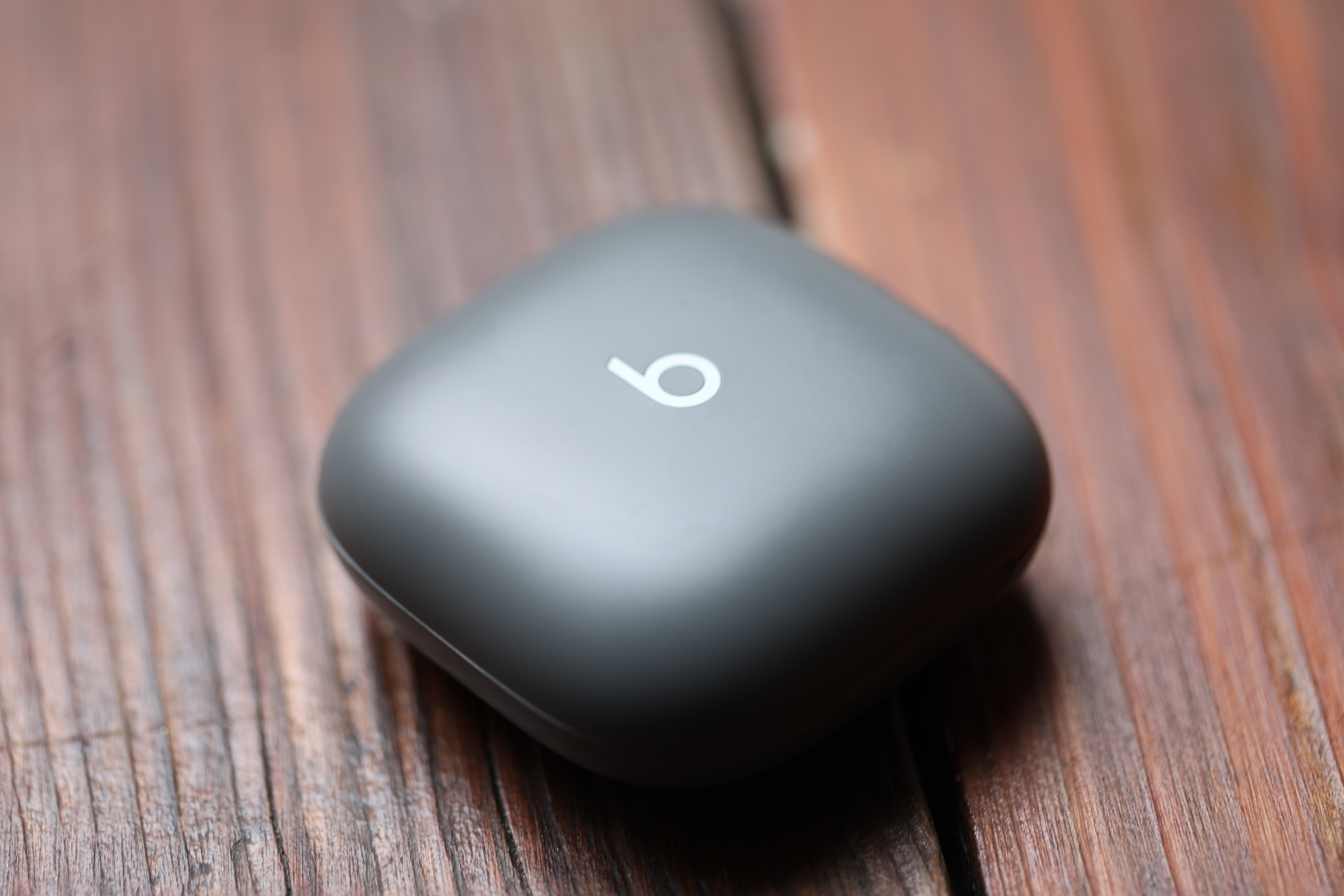 Being Apple-owned, it’s probably unsurprising that the buds work best with iOS devices. That’s due in large part to the inclusion of the H1 chip. In addition to fast paring and automatic device switching, you’ll get Find My functionality and Spatial Audio. That last bit, which is also available on various AirPods, uses headtracking to redirect the sound of audio. That means a more speaker-like experience for music listening and assigning the location of voices based on screen placement in FaceTime. I’ll be honest, it feels like a novelty for now. Android users, meanwhile, should download the Beats app for the full experience. 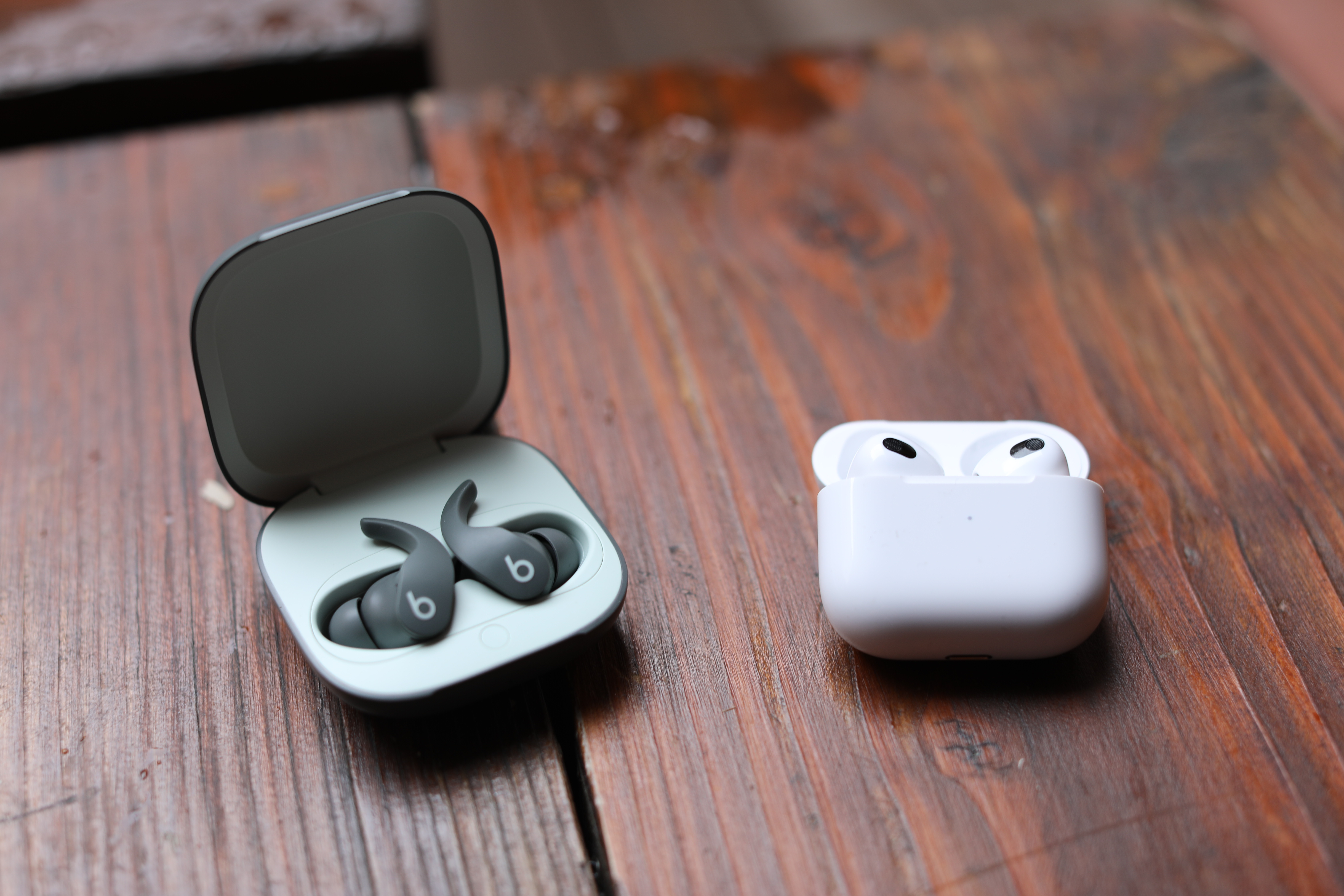 One of the unheralded upshots of moving from loops to wingtips is getting a significantly smaller charging case. The Powerbeats Pro’s case is a monster. The Fit Pro’s isn’t small by any stretch (it’s still significantly larger than the AirPods), but it’s actually small enough to carry around in a pocket. And thanks to some hardware advances, you actually get more combined battery on the Fit, at 27 hours versus 24. The buds themselves are rated at six to seven hours, depending on use. The case takes about 90 minutes for a full charge, doing so via USB-C — a distinct advantage for those of us who aren’t big Lightning fans. Points lost, however, for the exclusion of wireless chargin.

Interestingly, the Fit Pros don’t actually replace any other member of the Beats family. Power Beats Pro, Studio Buds and all of the tethered units are sticking around. There’s a bit of redundancy here, but Beats has always played it a bit faster and loser than its parent company on that front.

At $199, they’re right between the Beats Studio and the Powerbeats Pro. But for most people in most cases (particularly those who work out frequently), they’re the best bet of the bunch. They go up for preorder today and start shipping November 5.