Exactly six months after raising $80 million at a $505 million valuation, blockchain and Web3 development SaaS startup Alchemy has raised $250 million in a Series C funding round that values the company at $3.5 billion.

Andreessen Horowitz (a16z) led the financing, which was extremely competitive with a number of large venture firms clamoring to not only back the company, but lead the investment, according to sources familiar with the transaction.

Besides the fact that Alchemy increased its valuation by a staggering 7x over a six-month period (that’s a gain of more than $500 million in value per month), the round is notable for a few other reasons. For one, it represents one of a16z’s largest Web3/blockchain investments to date. In June, the firm revealed its $2.2 billion crypto fund, illustrating its serious commitment to the space. (For the unacquainted, Web3 refers to a set of protocols led by blockchain, that intends to reinvent how the Internet is wired in the backend).

What’s also interesting is that Alchemy has managed to achieve something that remains elusive for most startups: profitability.

According to CEO and co-founder Nikil Viswanathan, the company is in fact “very profitable.” It turned that corner over the past few months, he said, as demand for its offering has exploded and revenue grew 15x since its last raise in April. The startup has been doing so well that it hasn’t even touched the $80 million it raised in its Series B, according to Alchemy CTO and co-founder Joe Lau.

“All that money is still in the bank,” he said. “We didn’t need the money but we saw the value in bringing on great partners, such as Andreessen, which has an incredible team with deep technical expertise in the blockchain space.”

Put simply, Alchemy wants to do for blockchain and Web3 what AWS (Amazon Web Services) did for the internet. ​​The startup’s goal is to be the starting place for developers considering building a product on top of a blockchain or mainstream blockchain applications. Its developer tool aims to remove the complexity and costs of building infrastructure while improving applications through “necessary” developer tools. It launched its offering in August of 2020.

Today, Alchemy powers a range of transactions across nearly every blockchain vertical, including financial institutions, exchanges, billion-dollar decentralized finance projects and multinational organizations such as UNICEF. It has also quickly become the technology behind every major NFT platform, including MakersPlace, OpenSea, Nifty Gateway, SuperRare and CryptoPunks. Other customers include Dapper Labs, Axie Infinity, Fortune 500s building on blockchain such as the recently signed Adobe, PricewaterhouseCoopers. It also serves “the majority of DeFi.”

Alchemy powers over $45 billion in transaction volume for companies around the globe. That’s up from $30 billion at the time of its April raise. Since then, the company has also expanded the number of blockchains that it powers.

“Our platform was more or less on Ethereum, but we’ve seen a lot of demand and have since expanded to include Polygon, Arbitrum, Optimism and Flow,” Lau said. 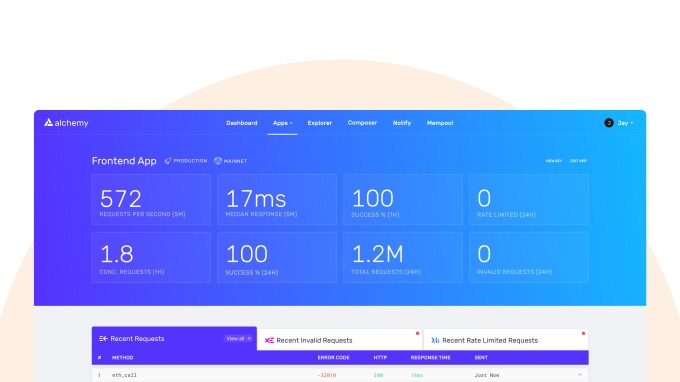 “We’ve had many more teams and companies join Alchemy, and more developers per team or per company are using our platform,” he added. “So we’re seeing growth across all axes.”

Despite its explosive growth, Alchemy remains a lean team. It currently has 27 employees. It is based in San Francisco, with an office in New York and remote employees globally.

The company plans to use its new capital mostly to invest in building a community around blockchain. Alchemy started at the right time, in the execs’ view — in 2017 when the market was tiny and many still doubted the opportunity in the space.

“Our ultimate goal is to bring the promise of blockchain to life,” Lau said. “We want to fulfill its potential by creating more resources for developers to come into the space and more effectively and more quickly build blockchain products.”

Viswanathan believes Alchemy is playing a crucial role in the recent surge and popularity of blockchain.

“As blockchain has been growing, not only has Alchemy grown, but we have helped the blockchain ecosystem grow because,” he told TechCrunch. “It’s this kind of virtuous cycle — the more we provide better tooling, the easier it is for developers to build products, and then more users come, so then more developers come and we make the tooling better, and so on and so forth. So we like to think of ourselves as helping spin that flywheel.” 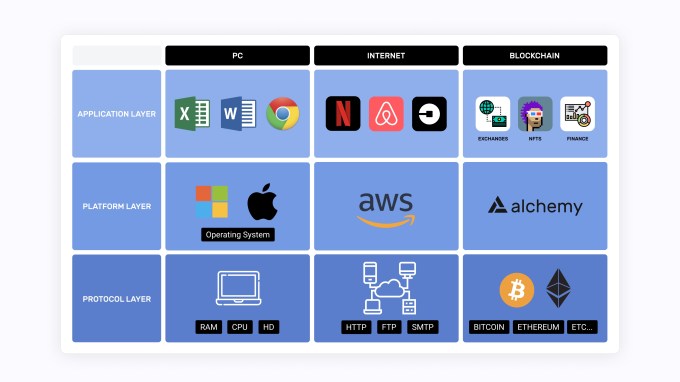 Ali Yahya, general partner at Andreessen Horowitz (16z), described Alchemy as “a key driver” of the growth of blockchain and Web3, and said the startup is already “the de facto developer platform” for Web3.

“Just as Microsoft and AWS built platforms that powered the computer and internet industries, Alchemy’s platform enables developers to build blockchain products used by millions globally,” he wrote via email, adding that Alchemy’s growth across all relevant metrics has been “staggering.”

Google chairman and former Stanford University President John L. Hennessy — who invested in the company’s last round — echoed Yahya’s sentiments. But he also made another, noteworthy comparison:

“Alchemy is powering the growth of the blockchain industry the same way Amazon Web Services did for the cloud,” he wrote via e-mail. “The excitement about their technology reminds me of the early days of Google.”

The Series C financing also included participation from new investors Lightspeed Venture Partners and Redpoint. Existing backers Coatue, Lee Fixel’s Addition, DFJ and Pantera Capital doubled down on their investments in Alchemy, which has now raised about $345 million in total since its 2017 inception.