Gringo, a Brazilian startup that has built an app aimed at supporting drivers in a variety of ways, has raised $8 million in a new round of funding.

Kaszek led the financing, which also included participation from GFC and OneVC. Kaszek also led the company’s seed round in 2020. The latest investment brings its total raised to $10 million since its 2019 inception.

São Paulo-based Gringo’s self-proclaimed mission is to be “the Brazilian driver’s best friend.” What that means is that it has built an app — launched in early 2020 — to help drivers monitor and perform services related to their documents and vehicles. For example, users can use the app to monitor, manage and pay for documentation (such as their driver licenses and vehicle registration). They can also pay taxes and fines through the app, which today has about 2.5 million users (2 million of whom are in São Paulo).

“We started with documentation because we realized that it is the main pain point of Brazilian drivers,” said Rodrigo Colmonero, founder and CEO of Gringo. “Everything starts and ends with documentation. When a driver needs to buy or sell, or finance a vehicle or obtain contract insurance, for example, it is very painful for them.”

Ultimately, he said, the startup’s goal is to become a “super app” for drivers. Today, the app offers real-time alerts on fines, annual taxes, points and license expiration.

“Many of our competitors are focusing on selling products, while we are building a customer-focused company and as a consequence we are solving their pain points while monetizing,” Colmonero told TechCrunch.

Gringo must be doing something right. It has seen the number of drivers on its platform grow “10x” year over year, according to Colmonero. Its GMV grew 100x year over year, while revenue grew 150x year over year. (Of course we don’t know the base, but the multiples are impressive). 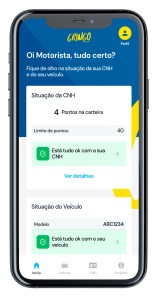 In addition to building out its app’s services, Gringo aims to also build community around the issues it addresses via WhatsApp and social networks. It shares content around auto-related topics such as notices of new legislation or anything “drivers need to know to have a practical routine in traffic.”

No doubt the COVID-19 pandemic and the resulting shift to more digital everything has helped Gringo’s efforts.

“The driver and vehicle licenses became digital in Brazil,” noted Colmonero. “Drivers are becoming more digital and it is no longer necessary for them to solve their problems with brokers and physical locations.”

Gringo offers its services for free and is monetizing by charging a service fee for the issuance or renewal of digital vehicle registration. It also offers credit for the payment of fines and taxes.

The startup plans to use its new capital mainly to expand into new services for drivers, toward hiring and to continue to expand within Brazil, and eventually into Latin America. In fact, the company is re-investing all of its profits in “growth into Brazil and later in Latin America,” according to Colmonero. Today, it has 100 employees, 5x more than a year ago.

Kaszek partner Santiago Fossatti said he was impressed by Gringo’s aim to help drivers manage “everything around car-related documentation,” including driver licenses, fines and annual registration.

“It is uniquely positioned to become a trusted hub from which drivers manage every step of their journey as car owners,” he wrote via email.

He was also drawn to the fact that the founding team had solid experience in growing other companies previously. Colmonero co-founded an equity fund called NEO Future Fund and invested in several public companies. Juliano Dutra was a partner at ifood and co-founded Rapiddo, a logistic startup sold to Ifood. And Caique Carvalho co-founded tattoo marketplace My ink.