Delta Air Lines, in partnership with TSA PreCheck, today announced an expansion of how it uses biometrics to let passengers drop their bags, go through security and board their plane by simply showing their face. For now, the newest part of this, the PreCheck bag-drop experience, is a pilot that’s only available in Atlanta and for Delta’s SkyMiles frequent flier program members who are also registered for TSA pre-check.

The project builds and expands upon the work the airline has done at its Detroit hub and for its international flights out of Atlanta. But now it includes a facial recognition-powered bag-drop experience, too.

In Atlanta, where Delta and the TSA are running this pilot, members of Delta’s SkyMiles frequent flier program who are also TSA pre-check members now get their own self-service PreCheck bag-drop area. There, passengers who opt in to the program (which they have to do every time they check in to a flight on the Delta app) simply walk up to the new bag-drop machines, scan their face, which will validate who they are through the TSA’s database, and the machine will print out their baggage label for them. Once they attach the label, they set the bag on the belt and the new automated bag-drop machines weigh the bag and use cameras to check its size. 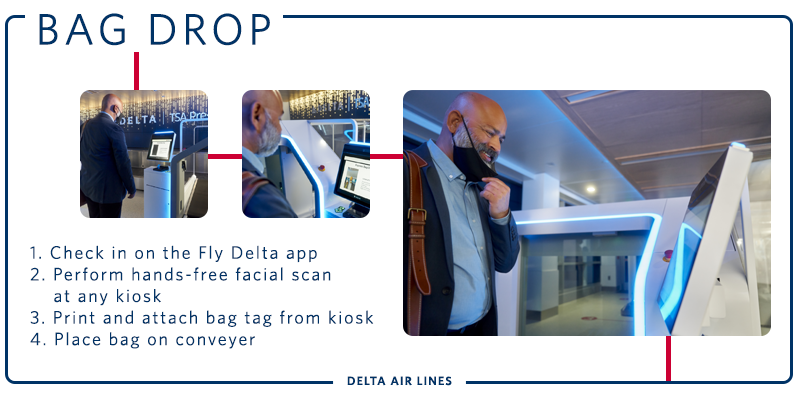 “Our target here is 30 seconds,” Greg Forbes, Delta’s managing director of Airport Experience said during a press event ahead of the official unveiling. “The way that we’re going to get there is not only the technology, the fact that there’s no choreography — you don’t have to launch the app or look for your driver’s license — [but also because] we’re also gathering together people who travel very similarly.”

Forbes noted that this only works for regular roller bags, suitcases and duffle bags. It’s essentially the bag-drop area for frequent fliers who know what they are doing. 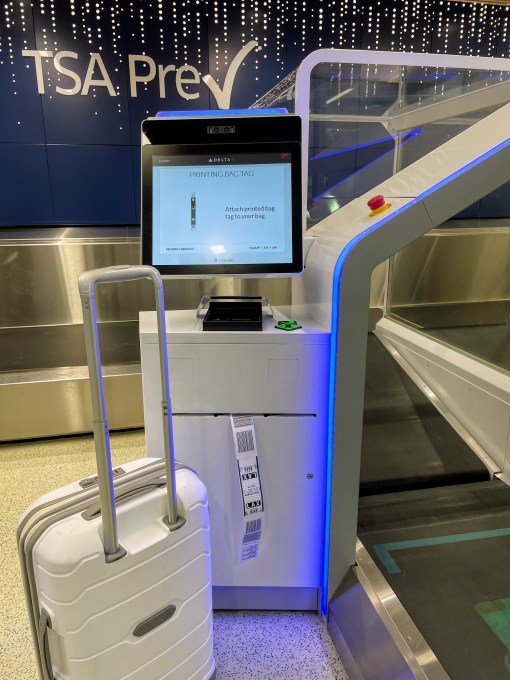 “If you come in with your surfboard, your golf clubs, Skycap [curbside check-in] is going be a better choice for you. If you’re Mrs. Johnson’s second-grade field trip and there’s 30 kids and they all have ticket problems. Not a great experience for you,” he said.

Currently, about a quarter of Atlanta-based Delta fliers are already qualified to drop off their bags this way. Since the experience is linked to a SkyMiles account, this may also incentivize a few people to sign up for Delta’s frequent flier program, too, which then gives it new ways to market to those fliers as well.

In trying out the experience firsthand, the promise of a 30-second bag drop seemed quite achievable. The facial recognition, with the mask briefly removed, takes a few seconds. Attaching the luggage tag probably took longer than anything else.

For now, Delta set up a small space for this with only four machines, but Forbes noted that if capacity becomes an issue, the airline already has plans for a second bag-drop area elsewhere in the airport.

The new bag-drop machines also feature affordances for the visually impaired and, in case there’s any confusion about who you are, a boarding pass scanner.

From bag drop, it’s off to the PreCheck line, where there’s another facial scan and then the boarding gate, for yet another one. If all goes well, you never need to get out a boarding pass or ID (but you should bring an ID anyway, of course). 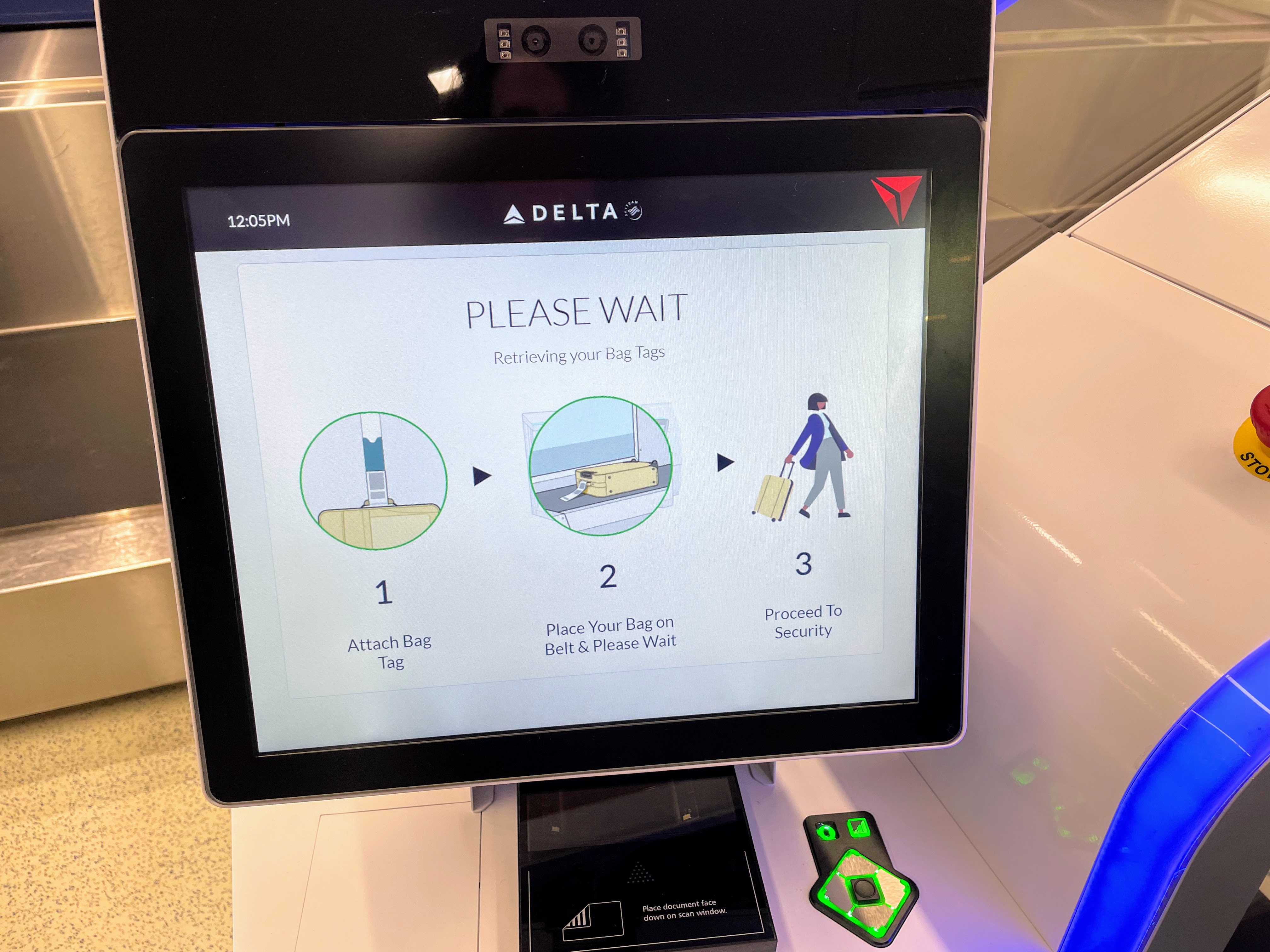 By default, the use of biometrics raises some privacy questions. Delta stresses that it only takes the image to send it to the TSA to validate your identity. And to be fair, if you opt in to PreCheck or Global Entry, the TSA already knows what you look like and when you travel. Forbes also noted that Delta itself doesn’t touch any of the biometric data but leaves that up to its partners who provide the technology for it. The security of their technology has been validated by the government, but we all know that there is no system that is guaranteed to be 100% secure.

Personally, I’ve now crossed the U.S. border a number of times this year, mostly using Global Entry, which at this point fully relies on facial recognition, too. It felt a bit odd the first time, but since Homeland Security already has all of my information, it became a non-issue and simply got me on my way to my connection faster. Using the Delta system from curbside to boarding felt quite similar (and not having to touch anything is a nice bonus in the age of corona).

Still, not everybody is going to be willing to make these tradeoffs. For them, nothing really changes. All of this is opt-in, after all.

For now, this is a somewhat exclusive partnership between Delta and the TSA, at least for the current pilot program. Other airlines are surely already working on something similar (United is a likely next adopter, despite its partnership with CLEAR). I would expect Delta to expand on this throughout its various customer touchpoints in the airport and others to follow suit soon. 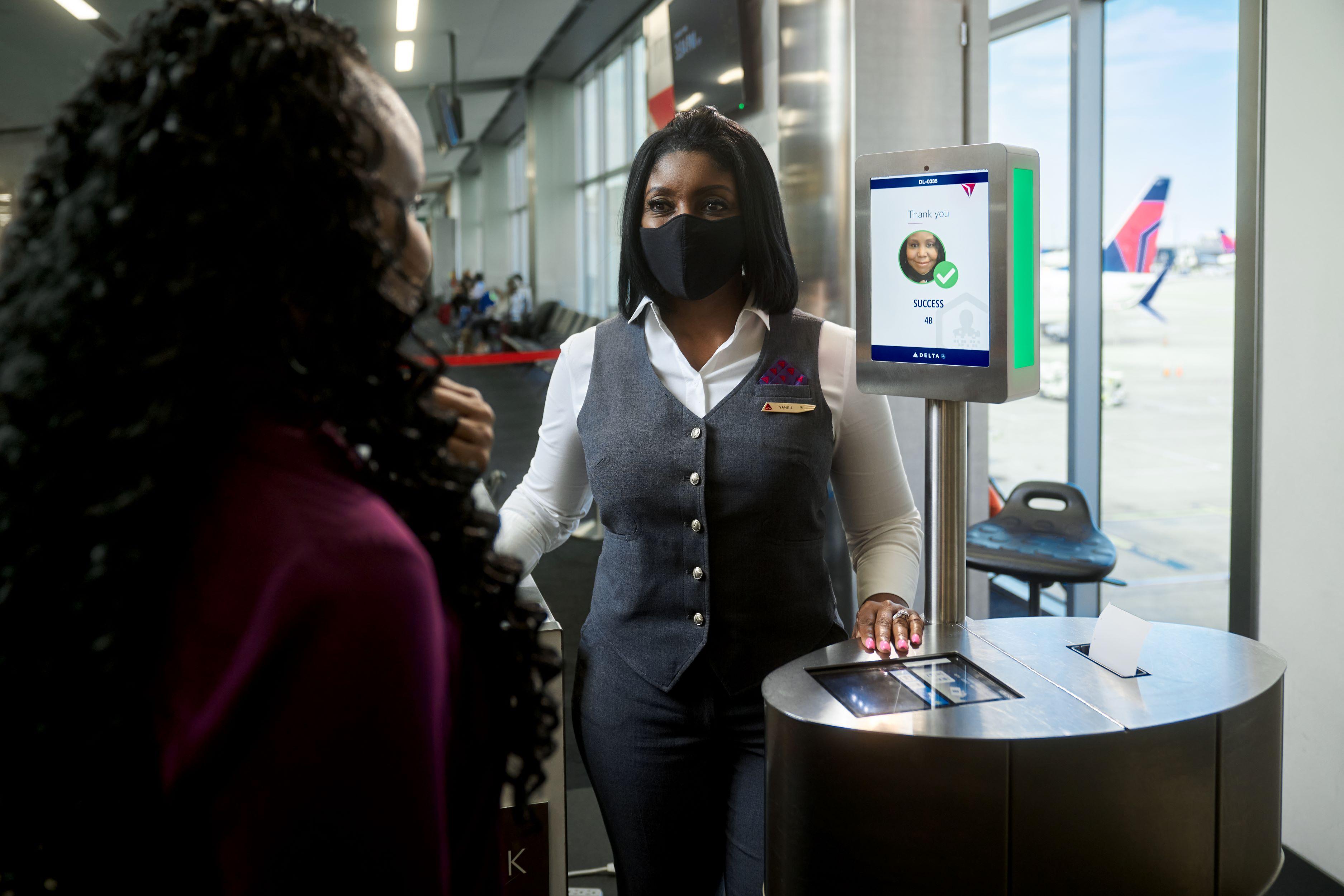 Delta Air Lines shows off its smarter travel app, an exoskeleton and more at CES