Apple finally put itself on equal footing with rivals by allowing users to rate and review its own, first-party apps for the first time this fall, amid increased regulatory pressure ahead of a likely antitrust investigation. Although some of Apple’s apps had been available to download separately, they had never been able to be reviewed. And some didn’t fare well, as it turned out — like Mail, News and Podcasts, for example, which started off under three stars. Now, Apple has opened up a few more first-party apps to the App Store for ratings and reviews, including the Phone app, Messages, Photos, Safari and others.

The change was first spotted by developer Kosta Eleftheriou, who has been a prominent figure in pushing for App Store reforms, particularly on the matter of App Store scammers.

Apple just added more of their built-in apps on the App Store, which you can now rate & review: 👀https://t.co/x3PoRpu80k pic.twitter.com/HylTXYOcRp

Citing Appfigures data, Eleftheriou noted a number of Apple apps have now become available to rate and review with iOS 15.1. This includes several default apps, like Clock, Phone, Messages, Camera, Photos, Apple Health and Safari. It also includes Apple Watch-enabled apps like Workout, World Clock, Find Devices and Heart Rate. (Users on iOS 14.x may be able to see the apps but won’t be able to rate and review them, he noted.)

This change could allow Apple to independently update its default apps outside of iOS updates as it does now. This is a tactic Google follows with many of its core Android features and functions, which have their own Play Store listings.

Appfigures confirmed to us the apps appear to have been added as separate listings on October 25, independently of the latest iOS update. As many consumers are likely unaware of the apps’ listings at this time, they have few reviews. For instance, the Phone app only has six ratings so far, they pointed out.  Messages has just a handful of ratings, as well, but they’re positive, giving the app 4.7 stars. (See below) 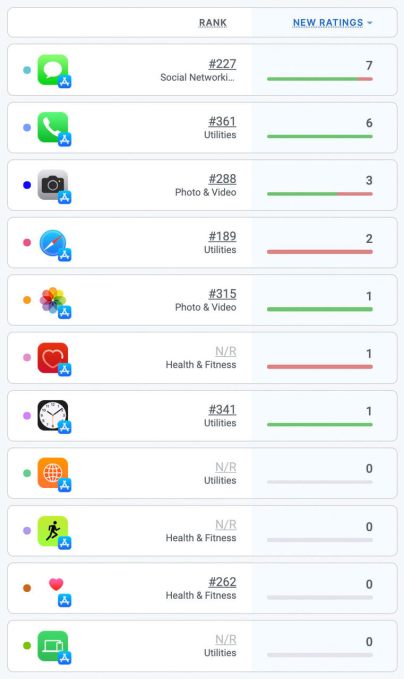 Oddly, Safari — which has four ratings, so far– has an age rating of only 4+ for its web browser, while its rivals like Chrome and Firefox are rated 17+, as are other web browsers.

It will be interesting to see how well these apps hold up as more people discover they can rate and review Apple’s default apps. Hopefully, by opening themselves up to consumer feedback, Apple will be motivated to make the changes users want to see in these built-in apps and get alerted earlier to possible bugs as they arise.