YouTube says it will soon begin to demonetize some of the channels on its platform that market themselves as “made for kids” if the content they produce is low-quality, encourages negative behavior or attitudes, or is heavily commercial. The company had previously warned this sort of content would no longer be eligible for inclusion in its dedicated YouTube Kids app, but starting next month YouTube will also begin to enforce new monetization policies as well, which may impact the creators’ eligibility for or possible removal from the YouTube Partner Program.

YouTube first announced its plans to increase its protections for minors in August, saying that some of the updates would directly address upcoming regulations, while others were going beyond what would be required by law. At the time, YouTube said it would shift the default settings on videos for users ages 13 to 17 to private, would enable “take a break” and bedtime reminders for minors, would stop leveraging “interests” data for targeting teens and kids with ads, and more.

Among the changes was a warning to those creators specifically making content aimed at kids, noting the company planned to remove “overly commercial content” from its standalone YouTube Kids app aimed at younger children.

Ahead of this move, a number of consumer advocacy groups had been pressuring YouTube and regulators alike to put an end to these types of videos, saying they blurred the lines between content and advertising. Plus, they argued, some creators weren’t disclosing that they had brand relationships behind the scenes that were fueling this sort of content production.

But without enforcement and guidelines around what’s appropriate for kids, some of YouTube’s largest creators were channels like multimillionaire Ryan Kaji of Ryan ToysReview (now Ryan’s World), which focused heavily on consumerism and toy unboxings.

YouTube in August said that it would remove content from YouTube Kids that incited viewers to buy a product and “content focused on the excessive accumulation or consumption of products.” Now, YouTube is warning that any channel targeting younger audiences or those that are classified as “made for kids” could be at risk of demonetization if they put out other sorts of low-quality content.

This includes content that encourages negative behavior and attitudes (like bullying, dishonestly, disrespect to others, dangerous pranks, unhealthy eating habits and more); content that’s deceptively educational; content that hinders comprehension; content that’s sensational or misleading; and content that includes strange use of children’s characters. (The latter had been a particular problem in recent years, such as videos featuring characters like Peppa Pig in situations that were not kid-friendly). 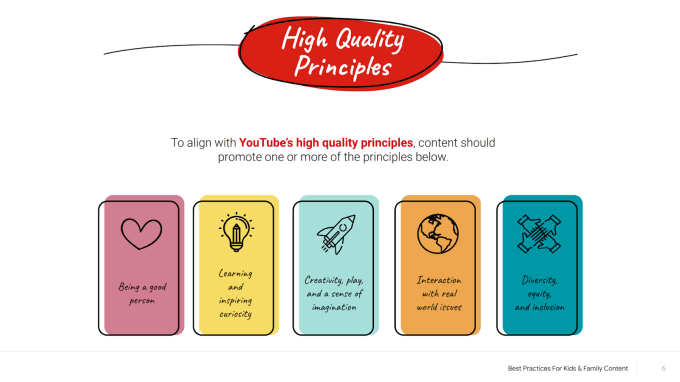 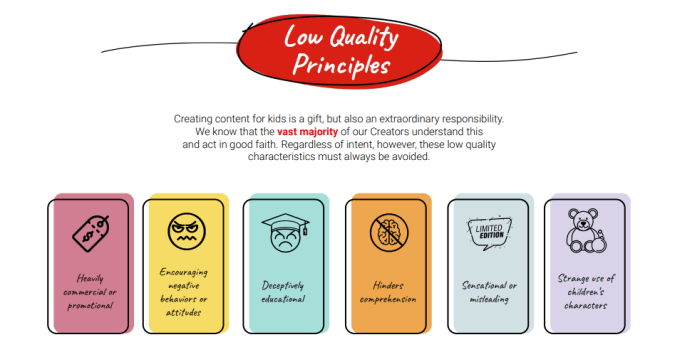 Starting in November, YouTube says it will begin to enforce additional monetization policies with these quality principles in mind for channels designated “made for kids” or that frequently create content that’s made for kids.

If the creators are making low-quality content, according to these principles, they may be removed or blocked from joining the YouTube Partner Program. Other videos that fall under the low-quality principles may receive limited or no advertising. Initially, YouTube says it will start with videos that encourage negative behavior. Others that have a strong focus on low-quality “made for kids” content will also go under review, the company added.

These negative principles were already factors that determined if the content is appropriate for YouTube Kids and informed the larger YouTube algorithm. But monetization changes are a much more powerful tool to shape what sort of content creators actually produce.

YouTube says creators whose channels could be impacted by the monetization changes will receive an email before the changes go into effect. In addition, even those channels that aren’t immediately impacted but produce low-quality kids’ content may receive a yellow icon in a warning to advertisers. The company didn’t say how many channels may be impacted as a result of its new policy.

On the flip side, content that adheres to high-quality principles will be recommended more by the YouTube algorithm going forward, in addition to being included in the YouTube Kids app.

The announcement arrives on the heels of an increased examination of the role tech companies are playing when it comes to the well-being of minors using their services. Already, Google and YouTube, Instagram and TikTok have announced updates that place more emphasis on the safety and privacy of their younger users. YouTube also launched new parental controls. This week, Snap and TikTok will face their own Congressional hearing, too.

YouTube says it will continue to reevaluate and update its principles going forward.