Selfbook, a hotel payment software startup, announced today that it has raised $25 million in a Series A round of funding led by Tiger Global Management.

Valia Ventures, Fin Venture Capital, early Stripe employee turned investor Lachy Groom and “strategic” angel investors also participated in the financing, which values the company at $125 million and brings its total funding raised to $30 million. The valuation represents a nearly “16x” increase from the company’s valuation when it raised a $2 million seed round last quarter, according to Khalid Meniri, co-founder and CEO of Selfbook. Investors such as Better Tomorrow Ventures, Abstract Ventures, TenOneTen Ventures and 9Yards Capital participated in this latest round, as well “with super pro rata.”

Selfbook claims that its software gives hotels a way to accept “one-click” payments directly on their websites while eliminating fraud and reducing chargebacks.

Founded in September 2020 as a pivot from a consumer travel app to a B2B company, New York-based Selfbook describes itself as the “Shopify for travel” and says it operates at the intersection of hospitality and fintech. Hotels can implement its technology, according to Meniri, “with a single line of code” to improve their booking experience directly on their existing reservation systems.

Selfbook launched with one hotel in April and has subsequently signed contracts representing nearly 90 hotels, with 15 so far having gone live. Its customers span a range of geographies and include Le Pigalle in Paris, Eden Rock St Barths and The LINE’s locations in Los Angeles, Austin, Texas and Washington, D.C. Selfbook is primarily focused on the U.S. and EU.

Over the past six months, the startup has seen a “10x” increase in Selfbook users using single sign-on and digital wallets. Additionally, 67% of bookings were made using digital wallets on mobile.

Additionally, the software can also group multiple services such as restaurant reservations, spa appointments and activities into a “single payment flow.” This, the company says, can drive more upsells for the hotels and as a result, increase revenue. 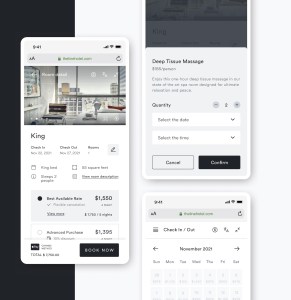 Today, Selfbook has 50 full-time employees, up from only four employees at the beginning of the year. It plans to use its new capital in part to do more hiring in addition to expanding partnerships with fintech partners and existing hospitality systems.

As mentioned above, Selfbook formerly operated as a B2C business that gave hotel guests a way to book reservations at over 3,000 hotels using its SIX Travel app. In order to facilitate those bookings, the company created its own “modern” transaction software after discovering there were no existing API partners with a simple hotel booking function on the market.

“When the pandemic hit and deeply impacted the hospitality industry, we decided to democratize our unique payment and transaction engine and improve the direct hotel booking process for all,” Meniri told TechCrunch. “We relaunched as Selfbook to offer our payment solution directly to hotels” with the goal of helping the hotel industry more easily recover from the negative effects of the pandemic.

For Tiger Global partner Alex Cook, Selfbook is not only modernizing the hotel booking experience, it has the potential to increase conversion for hotel operators and improve the booking experience for guests.

And for investor Groom, who is the former head of Stripe issuing, Selfbook aims to solve a very real pain point.

“Anyone who’s booked a hotel online knows how bad the state of payments in hospitality is,” he said in a statement. “Selfbook is a joy to use, and is obviously the future.”

Side note: After booking a hotel earlier this year through a third-party provider and having a nightmare experience to just cancel the booking, I can appreciate the need for this sort of technology. It was shocking to me that it was so complicated and difficult. So anything that can make directly booking with a hotel more convenient and safer, I’m all for.

Last week, we reported on Citcon, a mobile wallet payment provider, closing on $30 million in funding in a Series C round co-led by Norwest Venture Partners and Cota Capital.