Earlier this year, Google unveiled a partnership with Shopify that gave the e-commerce platform’s more than 1.7 million merchants the ability to reach consumers through Google Search and other services. Now, Microsoft is announcing a similar deal. The company recently said it’s teaming up with Shopify to expand product selection across its own search engine, Microsoft Bing, as well as within the Shopping tab on its Microsoft Edge browser and on its newly launched news service, Microsoft Start.

The integration is being made available to Shopify merchants through an updated Microsoft Channel app where they’ll be able to make a few adjustments to expand their reach across Microsoft’s network. Once set up, merchants’ products will show across the Shopping tab in Bing, Microsoft Edge and Microsoft Start as free product listings. 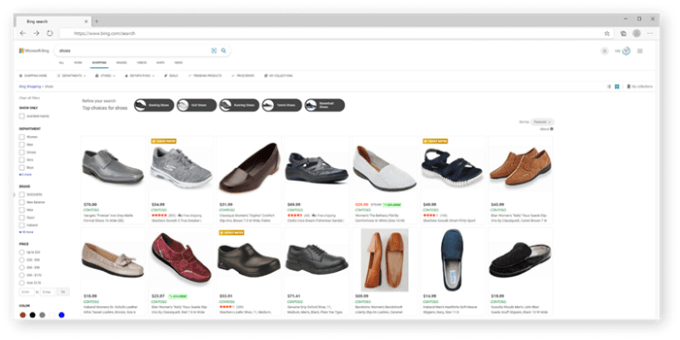 Like Google, Microsoft’s advertising revenues may be impacted by Amazon’s growing ads business over time.

Google has been scrambling to address this challenge with a revamp of its own Google Shopping service, which it pitched to online advertisers during its Google I/O developer conference this spring. The company then described its “Shopping Graph,” which would pull together information across websites, price reviews and product data to help consumers find where to find items, who had the best price and more. The company had also last year made it free for merchants to sell their products across Google  — a change that Google touted had driven an 80% increase in merchants on Google, with the “vast majority” being small to medium-sized businesses.

Microsoft, meanwhile, has been seeing its search advertising revenue grow in recent quarters as the overall advertising market rebounded. But Amazon has been rapidly increasing its market share. In the first half of 2021, Amazon reported $14.82 billion in ad sales, up 82% from the same period a year ago, The WSJ noted in a report on Google’s e-commerce makeover.

As more consumers start their product searches directly on Amazon and not on the web, bypassing search engines and homepage portals, both Google and Microsoft’s revenue could take a hit. To make their respective offerings more competitive, a partnership with Shopify gives both tech giants more direct access to a host of online inventory to showcase and market, including many listings Amazon may not have.

Shopify’s integration with Microsoft will also allow merchants to create new ad campaigns and view marketing performance via real-time reports in their Shopify store, Microsoft said when announcing the tie-up. The company also noted it had other “shopping enhancements” planned for the future, but didn’t detail what those new features may include.

Microsoft is one of many integrations Shopify has announced over the past year. It also just teamed up with Spotify to allow artists to sell merchandise through their Spotify profiles and has been working with TikTok on e-commerce experiences.