Station F, the big startup campus located in Paris, is launching an online component called Launch by Station F. With this new program, entrepreneurs from anywhere can get started and learn all the basics to start a company.

Launched in 2017, Station F is a massive building that used to be a rail freight depot. It has become a flagship entity for the tech community in France with hundreds of startups working from there.

“From day one, Station F has always been about making life easier for entrepreneurs,” Station F director Roxanne Varza said at the launch event earlier today.

There are many ways to join the Station F community. And yet, Station F still has to turn down most applications. Right now, around 9% of entrepreneurs applying to a Station F program get accepted. That’s why Station F is launching Launch.

“Launch is a new way to become an entrepreneur. It’s a fully online program, which means you can access it from anywhere in the world,” Varza said. “It’s literally all the basics to start a company. By the time you finish this program, you should understand all that crazy jargon.” 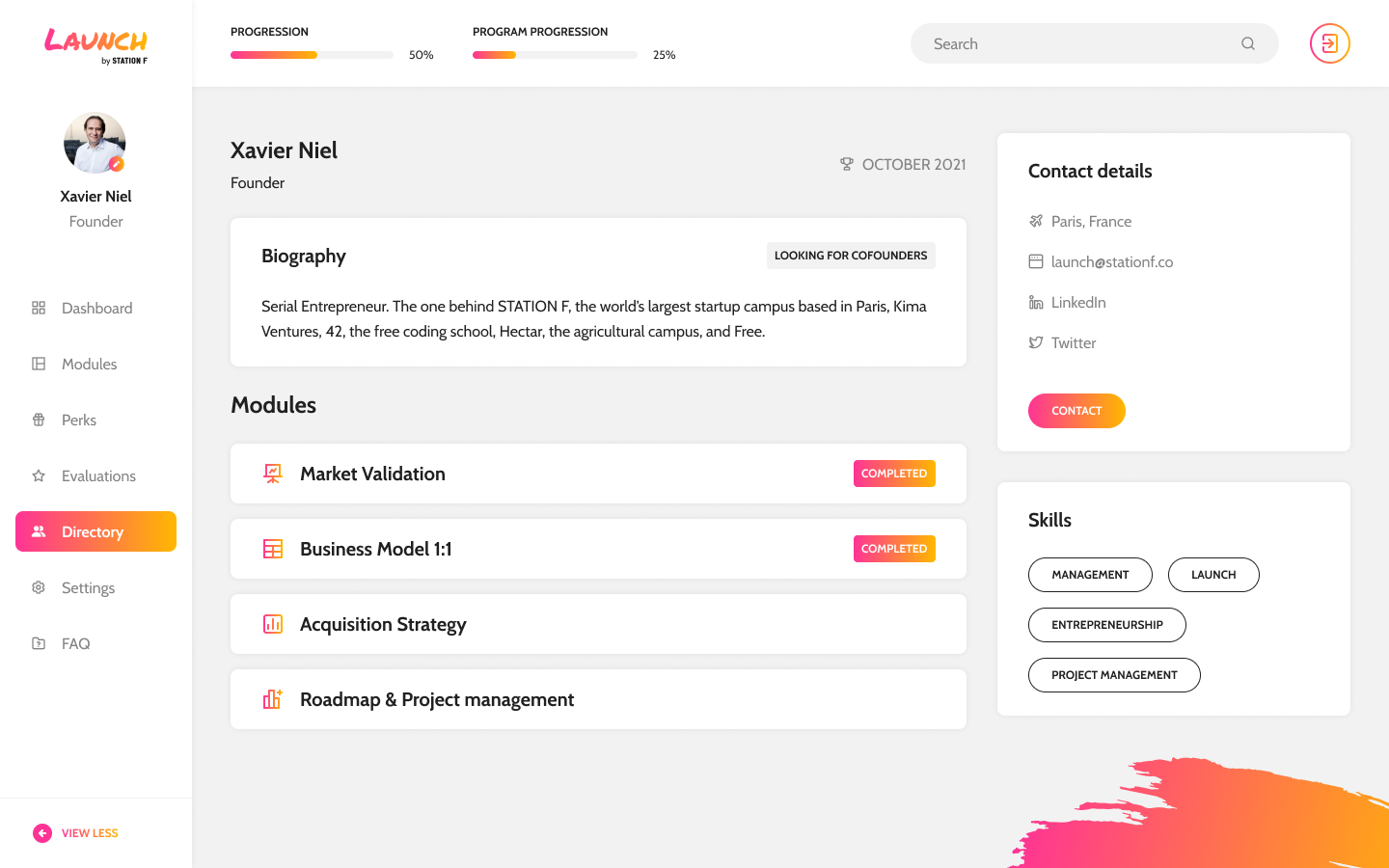 There are three basic building bricks behind Launch — content, tools and community.

The Station F team has created a ton of videos and articles by talking with some well-known entrepreneurs and investors in the startup community in France. This content will help you understand the tech industry.

People joining the Launch program will also be able to access a collection of essential tools to build a startup, with free trials and free tiers. Tools include Notion, Asana, Shopify, Bubble and Qonto.

Finally, the program is based on peer-to-peer feedback. Members can talk to each other in a Slack community, browse a directory of people and more. But the most powerful peer-to-peer component is that you have to give feedback to people when you’re going through the program.

“Throughout the program, you’ll be going through the steps of building a pitch deck. It’s really about asking yourself the right questions about the business,” Varza said. And other members will give you feedback on your pitch deck.

And Station F’s diversity partners, such as Singa, Les Déterminés, La French Tech Tremplin and the Fighters Program, will be able to access the service for free.

With this new online program, Station F is focusing on online education. While a ton of people want to start a startup, there’s still a steep learning curve to get started.

People who complete the Launch program won’t necessarily create a startup. But at least they’ll be able to have a conversation about the business model of a startup, product-market fit and more.

An update on Station F

Current partners include Ubisoft, Microsoft, Facebook and HEC Paris. Each program selects a batch of startups that can come and work from Station F. In addition to office space, they can network and get some perks from both partners and Station F. Today, Station F announced two new partners — Ecole 42 and CentraleSupélec.

“We also manage our own in-house programs and we have three of them,” Station F head of startup programs Marwan Elfitesse said.

There’s the Founders Program, which was announced back in 2016 when Varza unveiled Station F at TechCrunch Disrupt. With this program, pre-seed and seed startups working across any vertical can apply.

Station F also runs the Fighters Program. It is designed specifically for entrepreneurs coming from underprivileged backgrounds. “Good and great entrepreneurs can come from any background,” Elfitesse said.

Finally, Station F recently unveiled a third in-house program, the FemTech Program. As the name suggests, this program is going to be focused on companies working on female health, women’s sexual health and more.

“When we looked at the topic, we thought it was both an opportunity and that startups urgently needed some help,” Varza told me at the time. “It’s still a little-known category; it’s still a taboo subject.”

The first batch of companies in the FemTech Program will join the campus next month.