Google is lowering commissions on all subscription-based businesses on the Google Play Store, the company announced today. Previously, the company had followed Apple’s move by reducing commissions from 30% to 15% on the first $1 million of developer earnings. Now, it will lower the fees specifically for app makers who generate revenue through recurring subscriptions. Instead of charging them 30% in the first year, which lowers to 15% in year two and beyond, Google says developers will only be charged 15% from day one.

The company says 99% of developers will qualify for a service fee of 15% or less, as Google is also further reducing fees for specific vertical apps in the Play Media Experience Program. These will be adjusted to as low as 10%, it says.

The Play Media Experience Program encompasses apps like e-books and on-demand streaming music or video services, where the content costs account for the majority of sales. These are also businesses that, in some cases, compete directly with Google — as YouTube Music does with Spotify, for example.

The program was launched earlier this year to encourage book, video and audio developers to build for Android, and had offered service fees as low as 15%. Developers are asked to fill out a form to express interest. 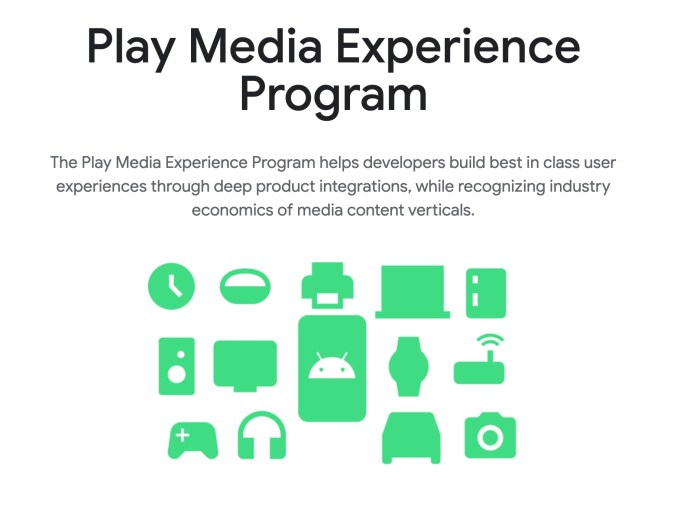 “Digital subscriptions have become one of the fastest growing models for developers but we know that subscription businesses face specific challenges in customer acquisition and retention,” said Google’s Sameer Samat, vice president, Product Management, in an announcement. “We’ve worked with our partners in dating, fitness, education and other sectors to understand the nuances of their businesses. Our current service fee drops from 30% to 15% after 12 months of a recurring subscription. But we’ve heard that customer churn makes it challenging for subscription businesses to benefit from that reduced rate. So, we’re simplifying things to ensure they can,” he said.

The new fees will kick in starting on January 1, 2022, Google said.

The company noted it spoke with the developer community to help determine the new fee structure, and took in feedback from a variety of developers across industries and verticals, including Anghami, AWA, Bumble, Calm, Duolingo, KADOKAWA, KKBOX, Picsart and Smule.

Meanwhile, when determining the new fees for media apps, Google said that it realized that app-building now requires addressing a number of platforms, including TVs, cars, watches, tablets and more. That requires developers to invest more into their app-based business. In addition, by lowering the fees on apps delivering media experiences, Google believes this could allow businesses to pass on the savings to the artists, musicians, authors and other creators who would be impacted by the changes.

The move comes at a time of increased regulatory scrutiny over the app stores and several antitrust lawsuits, including an ongoing one in the U.S. with Epic Games. Globally, lawmakers are working to determine if the tech giants are abusing their market power with the app stores, which provide the main distribution path for software that runs on mobile devices. South Korea, for instance, recently passed an “anti-Google” law meant to curb in-app payment commissions. Plus, in many cases, the tech companies are competing with the developers whose apps they distribute through other arms of their much larger businesses, which complicates matters further.

In a clever move to thwart further regulations, Google has managed to get some developers on board with its new commissions ahead of their release. It even today provided statements by Bumble and Duolingo praising the move, with Bumble’s CEO Whitney Wolfe Herd saying this pricing will allow it “to better invest in our products” and Duolingo CEO Luis von Ahn saying the reductions will help it to “accelerate our mission” and that it’s “excited to see Google continuing to collaborate with the ecosystem.”

Though lowering its commissions, Google stresses that it does need to charge fees in order to continue to invest in Android, its commerce platform, the Play Store, security, app distribution system and developer tools. Google says it will share more about its coming updates to tools, APIs and other technologies during its Android Developer Summit on October 27-28.