If you’ve been on Twitter lately, you’ve probably seen the red flag meme that’s going around — you quote a phrase that would be a “red flag” for someone to say to you, then add a bunch of red flag emojis. Twitter itself joined in on the fun, as well as brands like Dr. Pepper, MTV and even the NFL’s Houston Texans.

But for blind and visually-impaired people that use screen readers and voiceover technology, the red flag meme doesn’t make sense.

“Every time I saw that meme come up, I would have voiceover saying ‘triangular flag on a post,'” said Steve Saylor, a Blind Twitch gamer and accessibility advocate. “That’s technically the description of the emoji, but it ruins the meme, because this is about the color of the flag.” IPhone’s voiceover will tell you the number of “triangular flag on post” emojis, rather than reading them one by one, but some screen readers do read out each individual emoji, which means you have to hear “triangular flag on post” 48 times unless you scroll down.

This isn’t the worst emoji meme y’all have come up with, but it still sounds rather ridiculous through my text-to-speech program. Just take a listen to @Twitter’s tweet from earlier.

May as well just use one 🚩 emoji honestly. #Accessibility pic.twitter.com/BEoVPoeWrZ

“Memes are quite important in communication, in terms of feeling included in the conversation and being able to respond when someone posts one,” said Amy Pavel, an assistant professor at the University of Texas at Austin who researches tech accessibility. “So it’s important you understand the meaning of the meme in order to fully participate in the conversation.”

The Tej Kohli Foundation, an India-based nonprofit that treats blindness in poor and underserved communities, analyzed 100,000 tweets to learn more about how emojis are used online. From its data set, 10% of tweets with emojis contain more than three emojis, and 40% of tweets with emojis repeat those emojis. In particular, the “face with tears of joy” emoji is repeated 93% of the time it’s used. The foundation recommends that people place emojis at the end of sentences, never use emojis to replace words (i.e. saying “it is very ☀️ today” instead of “it is very sunny today”) and don’t use more than three emojis in repetition.

The red flag meme sparked conversations about meme accessibility last week, but this is far from the first time that a meme has made its rounds on social media despite being a nuisance for people using screen readers.

“The clapping hands meme can be really tedious to read. You have to have the clapping hands after each word, so it can be difficult to remember exactly what the full sentence was,” Pavel told TechCrunch. She also referenced a social trend where people use uncommon characters to simulate writing in a different font, as well as memes made from ASCII art, like the “in this house” meme or “bunny holding a sign” meme. “They sound completely nonsensical, because it reads out every character and then some of those are Cyrillic characters, Greek characters or Kanji.”

Pavel hopes that researchers and developers can look toward using artificial intelligence and machine learning to identify common tropes in digital communication, then explain them in simpler ways on a voiceover — instead of saying “clapping hands emoji” in between each word, for example, the screen reader could say the sentence, then note that there’s a clapping emoji in between each word. But this technology has a long way to go, so in the meantime, accessibility experts are working to educate people about how to make their memes more accessible, rather than waiting for technology to catch up.

“I totally get the point of the meme, especially the whole red flag thing,” said Saylor. “I never want to stifle anyone’s creativity. I never want to say to anyone, ‘I don’t want you to use that meme.’ But I just want people to think about, hey, if you want as many people as possible to enjoy the meme, make it accessible for those who need it, whether it’s adding alt text for screen readers, or adding captions in videos.”

In the case of emoji-based memes and ASCII art memes, one workaround is to screenshot the meme, post it as a photo, and add alt text to describe the photo. On Twitter, adding alt text is relatively straightforward — after you upload an image, you can click an “add description” button beneath the image to add alt text before you send the Tweet. But on Instagram, on the screen before you post an image, you need to scroll down to the bottom to click a small “advanced settings” button. Then, you scroll down to “accessibility,” where you can click on a button that says “write alt text” to add an image description.

“I think there’s just not enough knowledge and education out there for digital marketers and professional communicators — part of the issue is that we just don’t know about accessibility,” said Alexa Heinrich, a social media manager and accessibility advocate. “When marketers, content creators and everyday users make content, it would be helpful if they took a second to remember that not everyone experiences the internet the same way.”

Hi. Please stop tweeting and posting stuff like this. It’s a nightmare to listen to through a text-to-speech program.

Heinrich and Saylor told TechCrunch that they found Twitter to be one of the more accessible social media platforms — but the bar isn’t high (somehow, Clubhouse still doesn’t have live captioning). Last summer, Twitter piloted an audio tweets feature, but the clips didn’t have captions, making the tweets inaccessible to deaf and hard of hearing users. When people with disabilities pointed out the massive oversight in rolling out an inaccessible feature, it was revealed that Twitter didn’t have a dedicated accessibility team — rather, their accessibility efforts were coordinated on a volunteer basis by full-time employees with many other responsibilities. Since then, Twitter has established an accessibility team.

“Twitter is definitely the platform that tries the hardest and is most transparent about its efforts with accessibility and the platform. They’re open to feedback, which is really great,” said Heinrich. Still, Twitter has since unveiled major updates that hampered accessibility. “Platforms themselves need to do a better job of educating the brands and marketers that they partner with on how they can create accessible content,” she added.

According to app researcher Jane Manchun Wong, Twitter is working on a feature that lets users opt-in to pop-up notifications that would appear if they’re about to post an image without alt text. Twitter confirmed to TechCrunch that it’s working on this feature, and that it is expected to roll out by the end of the year. 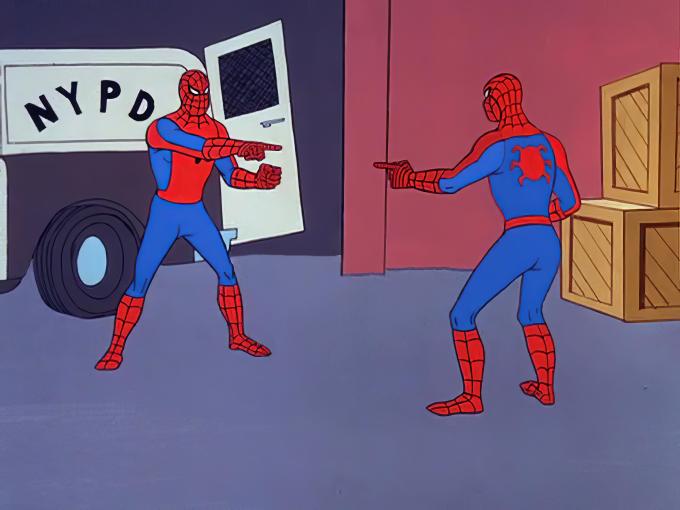 But even when users know how to add alt text, it can be tricky to figure out the best way to describe an image, especially when it comes to memes. The Spider-Man pointing meme, for example, is straightforward — Saylor said he would describe it as “two identical Spider-Man pointing at each other.” But how would you describe a meme like galaxy brain or the butterfly meme?

“Especially in regard to memes, what really matters is what the subject is in context of the image itself. Sometimes, it’s a little more complicated, like in a photo or an animated GIF,” Saylor said. “But you don’t have to describe everything that’s in the photo — just enough information that gets the point across. In most cases, that extra information is completely superfluous to us. Describe what the subject is, what’s in the foreground, what the context of the photo is or why you’re posting that photo, and then that allows us to be short and to the point, so the screen readers can understand what the image is without having to listen to 1,000 characters of the entire photo being described.”

That’s why, in Saylor’s description of the Spider-Man pointing meme, he doesn’t say that Spider-Man is standing on a blue floor, and that in the background, there’s an NYPD truck with an open door next to a red wall and some wooden boxes. We don’t need those details to understand the meme.

But accessibility isn’t one size fits all, and not all disabilities are the same. Even people with the same disability will have different preferences on how they want to experience the internet.

“I think each user knows best what they would prefer, especially for accessibility, because disability is a really individual experience,” Pavel said.

In October 2020, Pavel published a paper titled “Making GIFs Accessible.” In her research, she offered participants multiple ways to experience an animated GIF, surveying them about which way they preferred. Earlier that year, Twitter had added alt texts for GIFs.

“I think GIFs are pretty interesting because oftentimes, a lot of them are taken from existing media that has audio. For instance, a great one is, Michael from ‘The Office,’ yelling, ‘No, no, no’, and it gets longer and louder,” Pavel said. In her experiment, one version of alt text simply explained the animation in the same way one would write alt text for an image. Another iteration used the literal audio from “The Office.” The third option had a voiceover explain that this was a GIF of Michael from “The Office,” then played the audio where he screams “no, no, no.”

“The main sentiment we got back was like, ‘Yes, I want all of these, but I don’t want to have to pick one that’s there all the time,'” Pavel said. “I think it’s all about giving the user the option to customize what they want their screen reader to do. They might want to change their settings depending on how interested they are in a GIF.”

In the meantime, experts say that the most immediate way to make content more accessible is for the general public to improve their own posting practices.

“People want to have the discussion of, ‘Oh, is it going to get as much engagement?'” said Heinrich. “But my answer is I don’t care. If it’s not accessible, then that’s what I care about. I care about the people, not the numbers.”