May of 2020 marked the end of an era for the Pixel. Google’s team lost a few key players, as it looked forward toward a transformative future. Understandably so. The Pixel has never been bad a phone (though it’s had some struggles through the years), so much as an unremarkable one. But in an era when it’s hard to buy a bad flagship smartphone, pretty good is not good enough.

Google’s attempts to differentiate themselves from the Apples and Samsungs of the world have largely come up short. The company has had decent success with its budget range A-Series, but dreams of going head-to-head with premium manufacturers have thus far fallen short. Last year’s Pixel 5 wasn’t the departure fans had hoped for, because revamping a product line takes time. 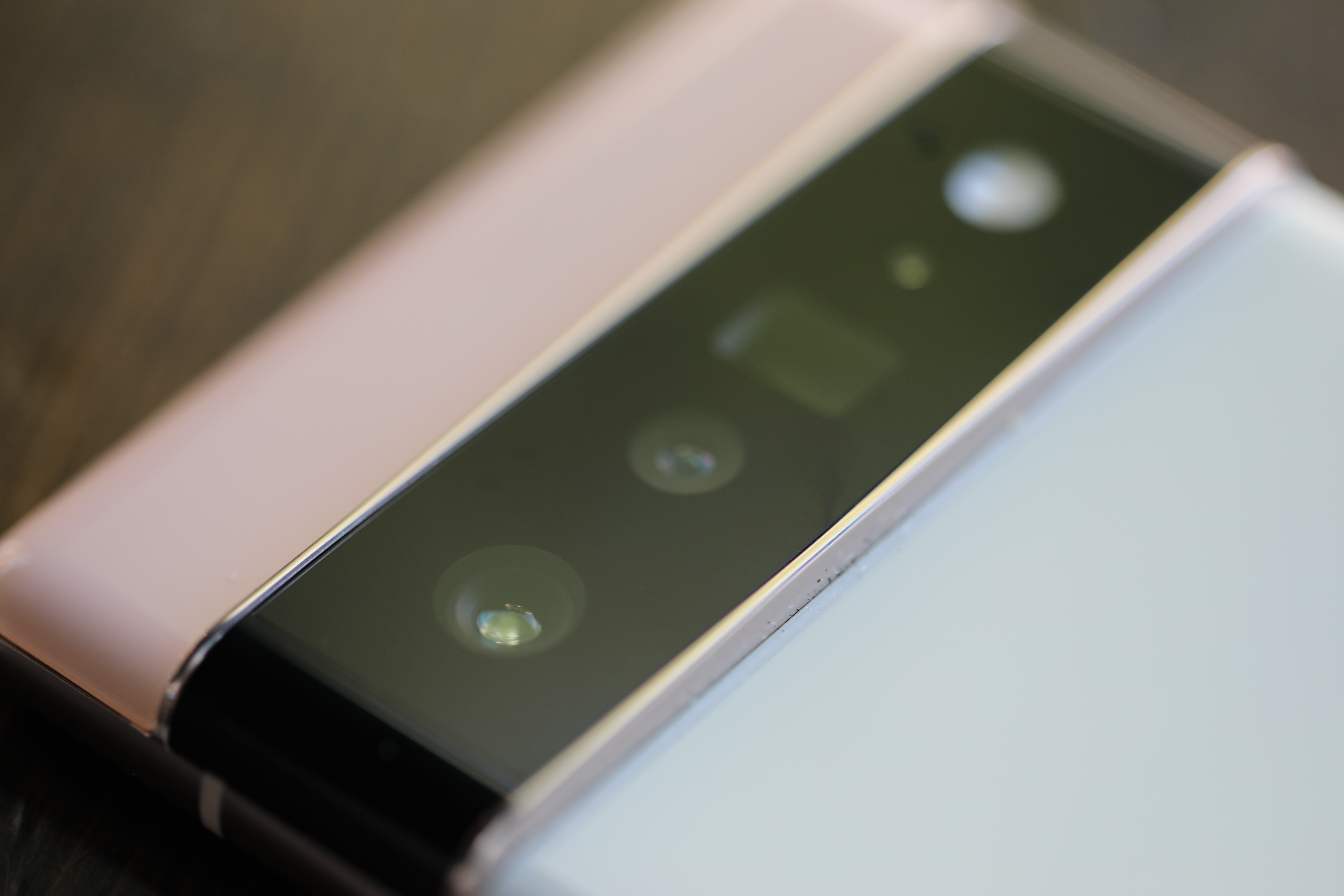 This morning, at the company’s virtual hardware event, however, Google is finally showing us what it means to pick up and start over again. In many ways, the Pixel 6 marks the most radical departure in the history of Google’s flagship devices — and its most serious attempt to take the fight to Samsung and Apple.

The company gave us our first glimpse of the device back in August. It was a surprisingly complete look at a device it would take another three and a half months to announce. Hardware head Rick Osterloh primarily focused on chips, design and the fact that Google was becoming the latest company to buck its reliance on Qualcomm by building its own in-house chip, Tensor.

“AI is the future of our innovation work, but the problem is we’ve run into computing limitations that prevented us from fully pursuing our mission,” the executive wrote. “So we set about building a technology platform built for mobile that enabled us to bring our most innovative AI and machine learning (ML) to our Pixel users. We set out to make our own System on a Chip (SoC) to power Pixel 6. And now, years later, it’s almost here.” 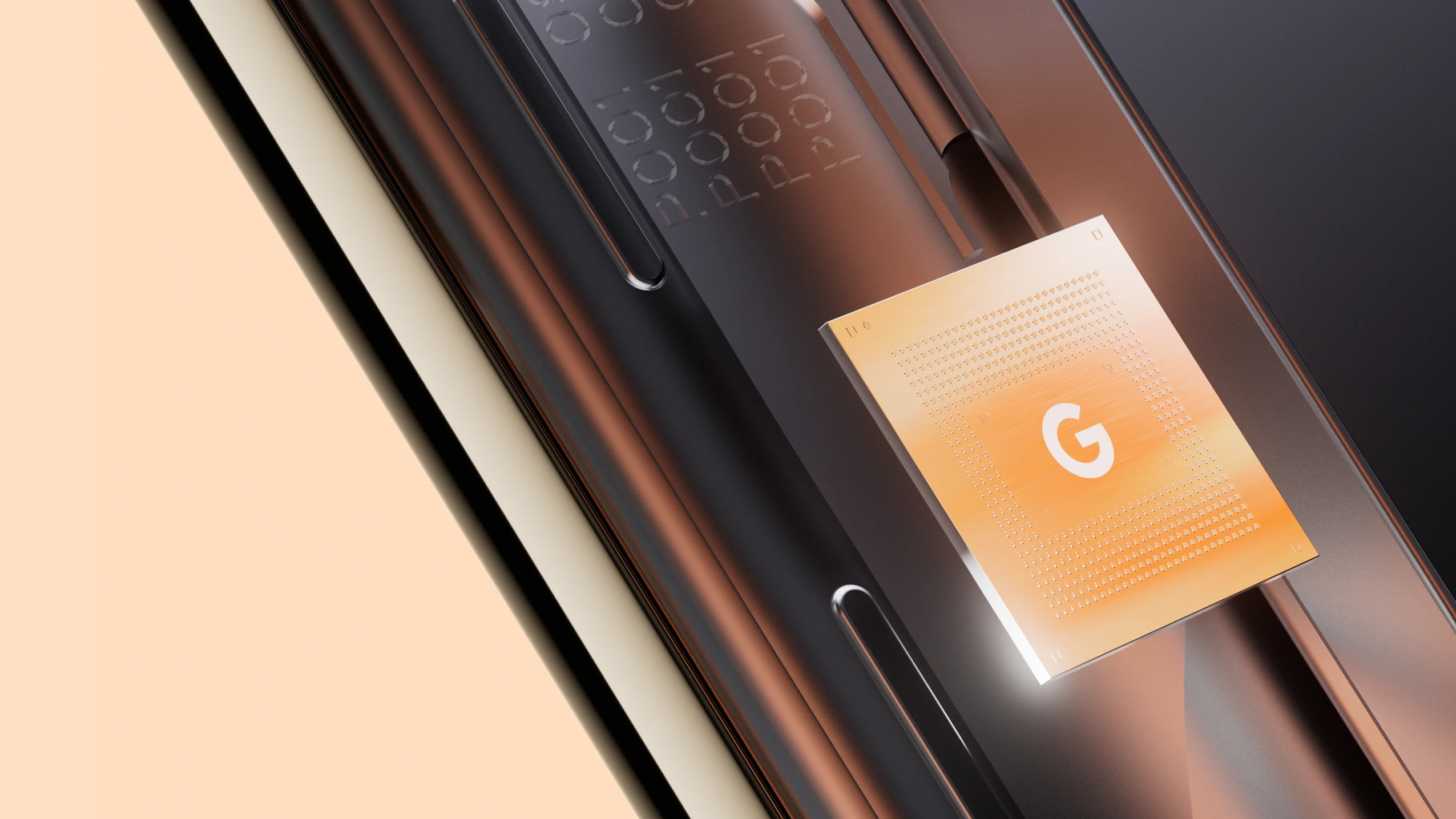 Image Credits: Google (opens in a new window) (Image has been modified)

And now it is. The Tensor had landed, alongside the Pixel 6 and 6 Pro it powers. I have the latter in my possession (review soon), and it’s immediately clear that this is a radically new direction for the Pixel line. Google’s clearly gone in a premium direction with the new device, which shares more common DNA with the likes of Samsung’s devices than any of the Pixels we’ve seen to date.

The Pixel 6 sports a 6.4-inch FHD+ OLED at 411 ppi – that bit, at least, is keeping with mid-range specs. The Pro bumps it up to a 6.7-inch QHD+ at 512 ppi. Those displays have refresh rates of 90 and 120 Hz, respectively, protected by a Gorilla Glass Victus cover, which curves on the edges. 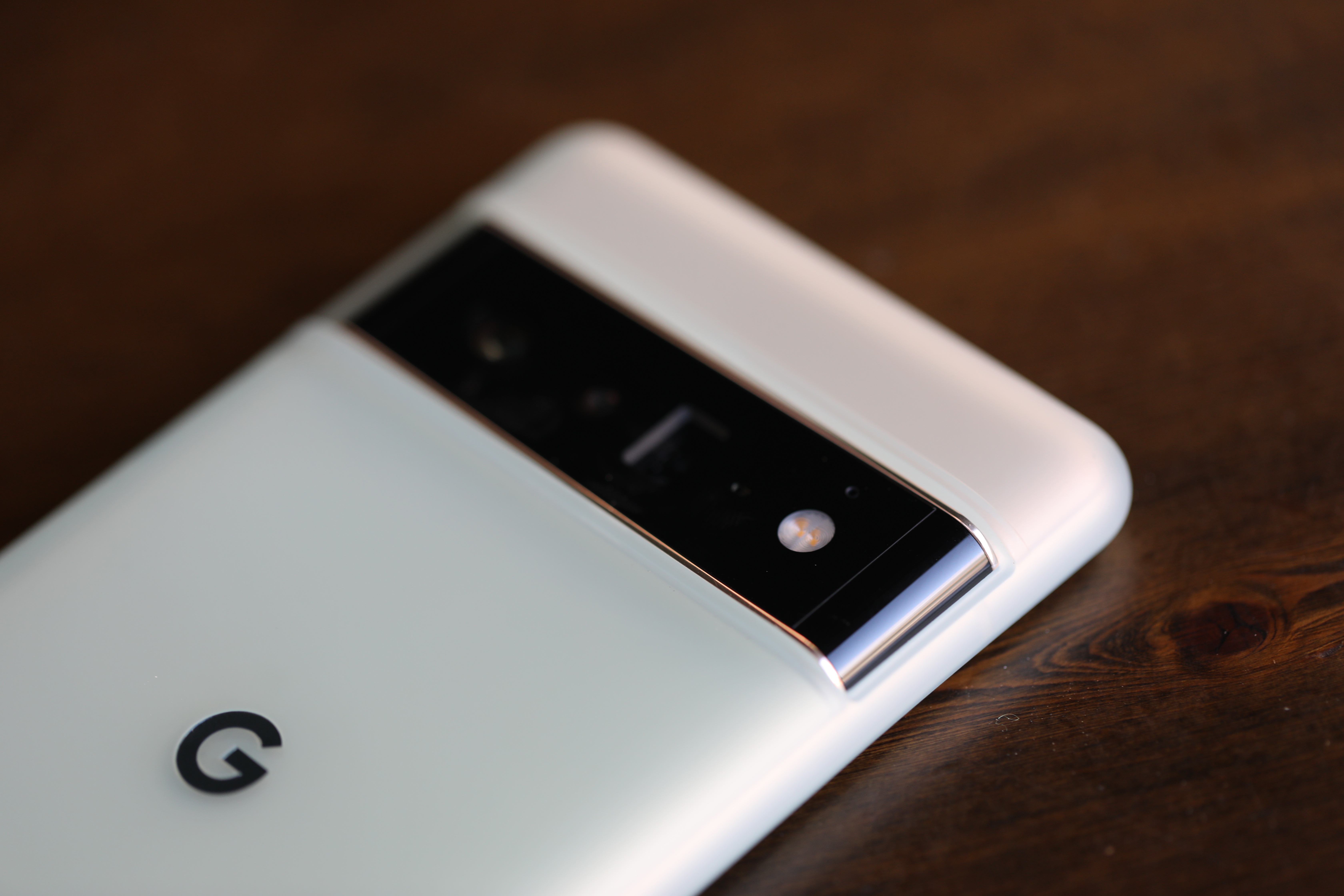 The rear, meanwhile, is covered in Gorilla Glass 6, with a large and distinctive camera bar that runs along the top third. It’s a sizable enough bump that the phone sits at an angle on its back, unless the phone is in a case [seen above], which keeps things more (but not perfectly ) flush. There’s a slight difference in the hues above and below the camera bar, in an effort to inject a bit more color into the device, now that the Pixel no longer sports the color pop power button. The focus on camera hardware is, in and of itself, a departure for the company. Google has long been so bullish on computational photography that it has implied that hardware is almost a moot point. Perhaps one day in the future, someone will be able to make a compelling version of this argument, where AI and ML are doing most or all of the heavy lifting here. For now, however, camera hardware is still important.

Look no further than the setup on the new Pixels. The 6 supports two lenses: a 50-megapixel wide-angle camera and 12-megapixel on the 6, plus a 48 megapixel telephoto on the 6 Pro. That last one does 4x optical or up to 20x Super Res, though even with computational photography, things are going to degrade pretty quickly. The front-facing camera, meanwhile, is eight megapixels on the 6 and 11 megapixels on the 6 Pro, with 84- and 94-degree fields of view, respectively. 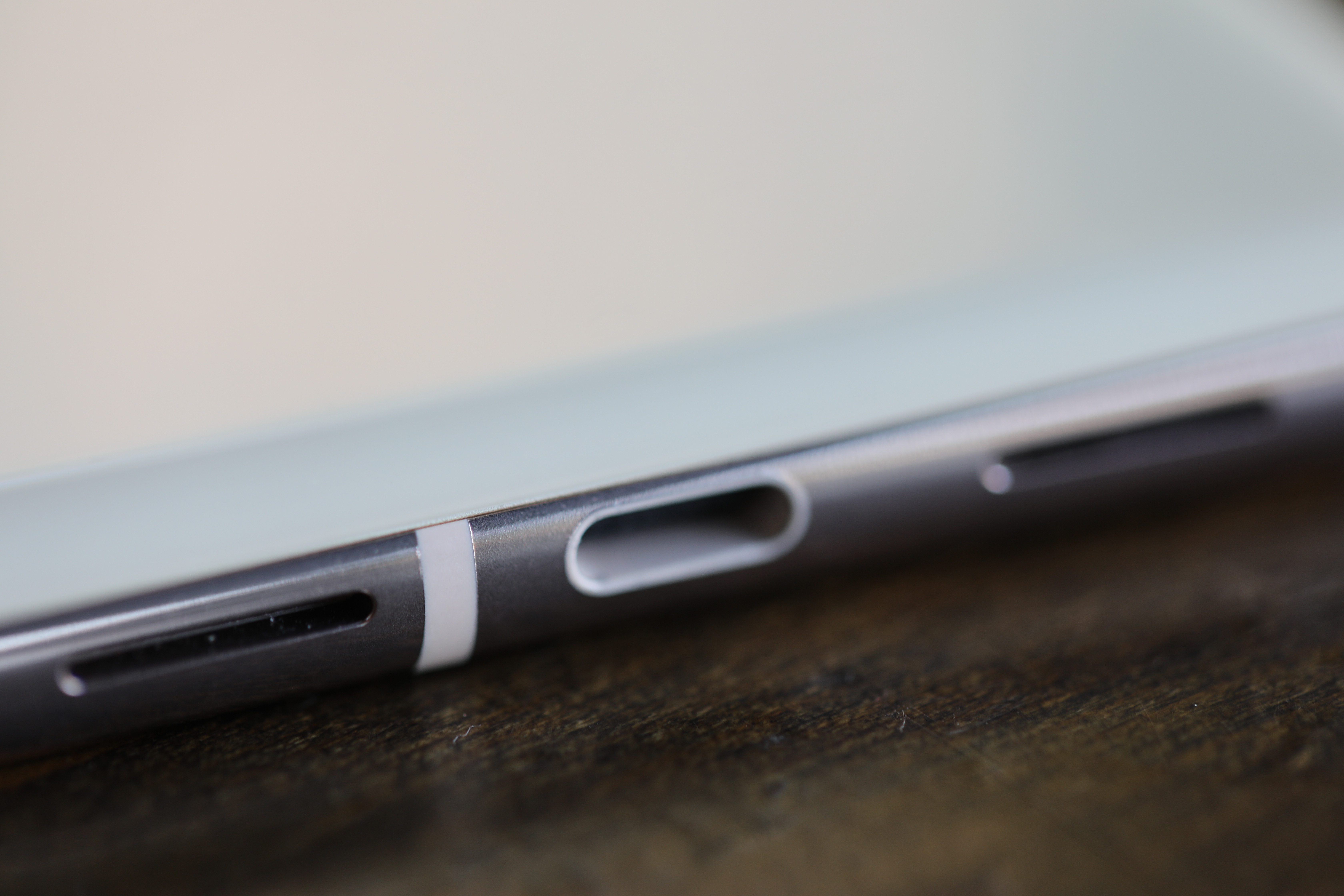 There’s more info on the various camera features in some of our breakout posts, but here’s a list of what you’ll be able to do on both systems:

The most interesting new additions are Real Tone, Motion Mode, Magic Eraser and Face Unblur. The latter is pretty much what it sounds like, sharpening a subject’s face after shooting. Motion Mode is similar to Portrait Mode, creating a motion blur around a moving subject. Magic Eraser uses a Photoshop-like tool to remove unwanted subjects from the background of the photo, with AI filling in the gaps. Real Tone, meanwhile, is an effort to take better photos of subjects, regardless of skin color — something that’s been woefully lacking on smartphones to this point. 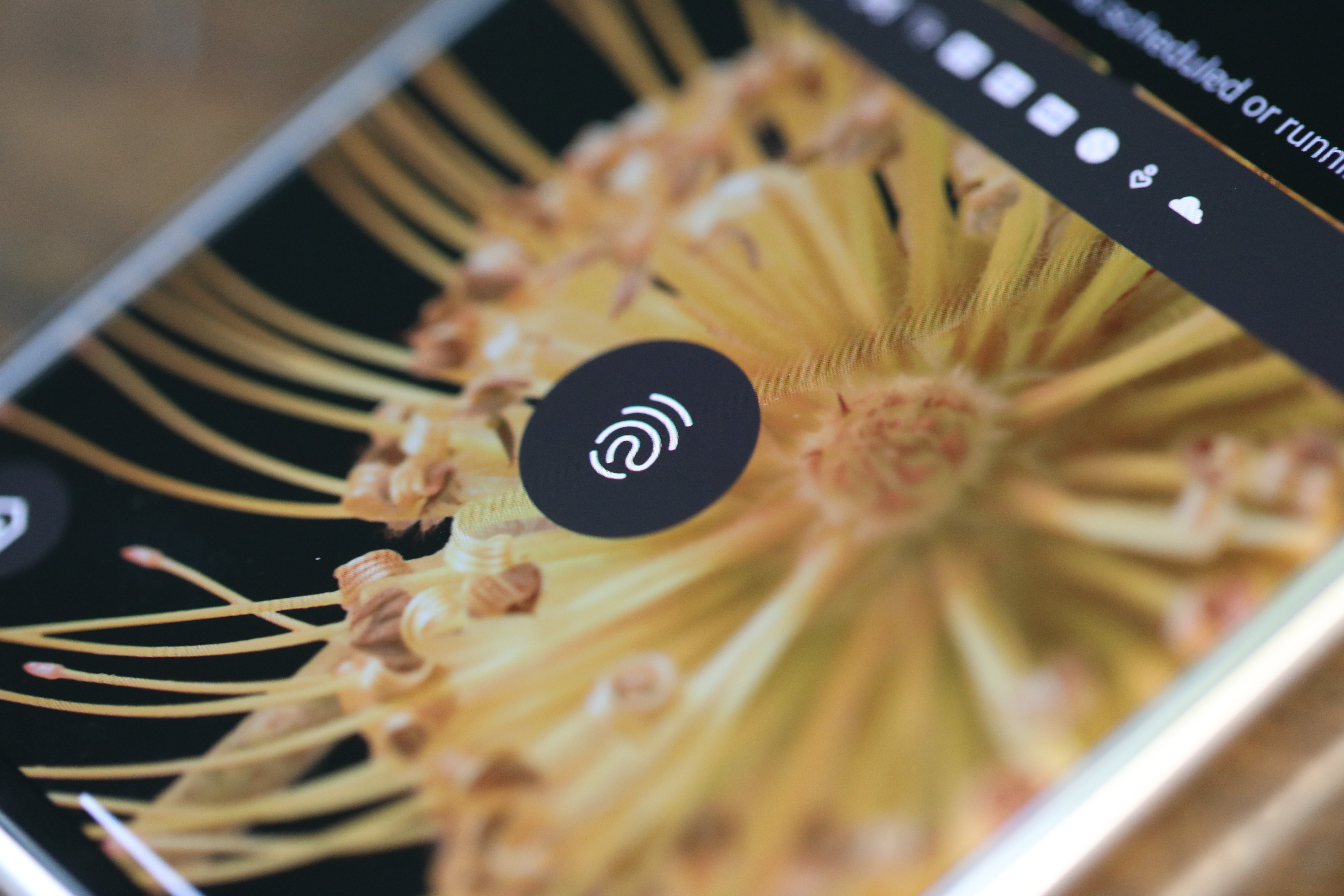 The system sports a quick in-display fingerprint reader, and all of the sorts of first-party software you’d expect on a Pixel device. That includes Live Translate, Recorder and Android’s new Material You, which creates aesthetic consistency across the wallpaper and apps. The company described it thusly at the last I/O,

Material You explores a more humanistic approach to design. One that celebrates the tension between design sensibility and personal preference, and does not shy away from emotion. Without compromising the functional foundations of our apps, Material You seeks to create designs that are personal for every style, accessible for every need, alive and adaptive for every screen.

Also new is Calling Assistance, a new feature, which, much like Duplex, is designed to ease the interaction between human and robot operators. Here, it offers projected call wait times for toll free numbers, based on day and time. Direct My Call, meanwhile, uses Google’s transcription feature to display text versions of audio menus that direct to the dial pad. Hold For Me, meanwhile, will wait on the call and notify you when a human picks up.

There’s also improved Assistant Voice typing. Saying, “Hey Google, Type” will use Assistant to dictate text. “Stop” turns the feature off, and “Send” fires off a message. You can also spell out difficult words, letter by letter and dictate emojis. 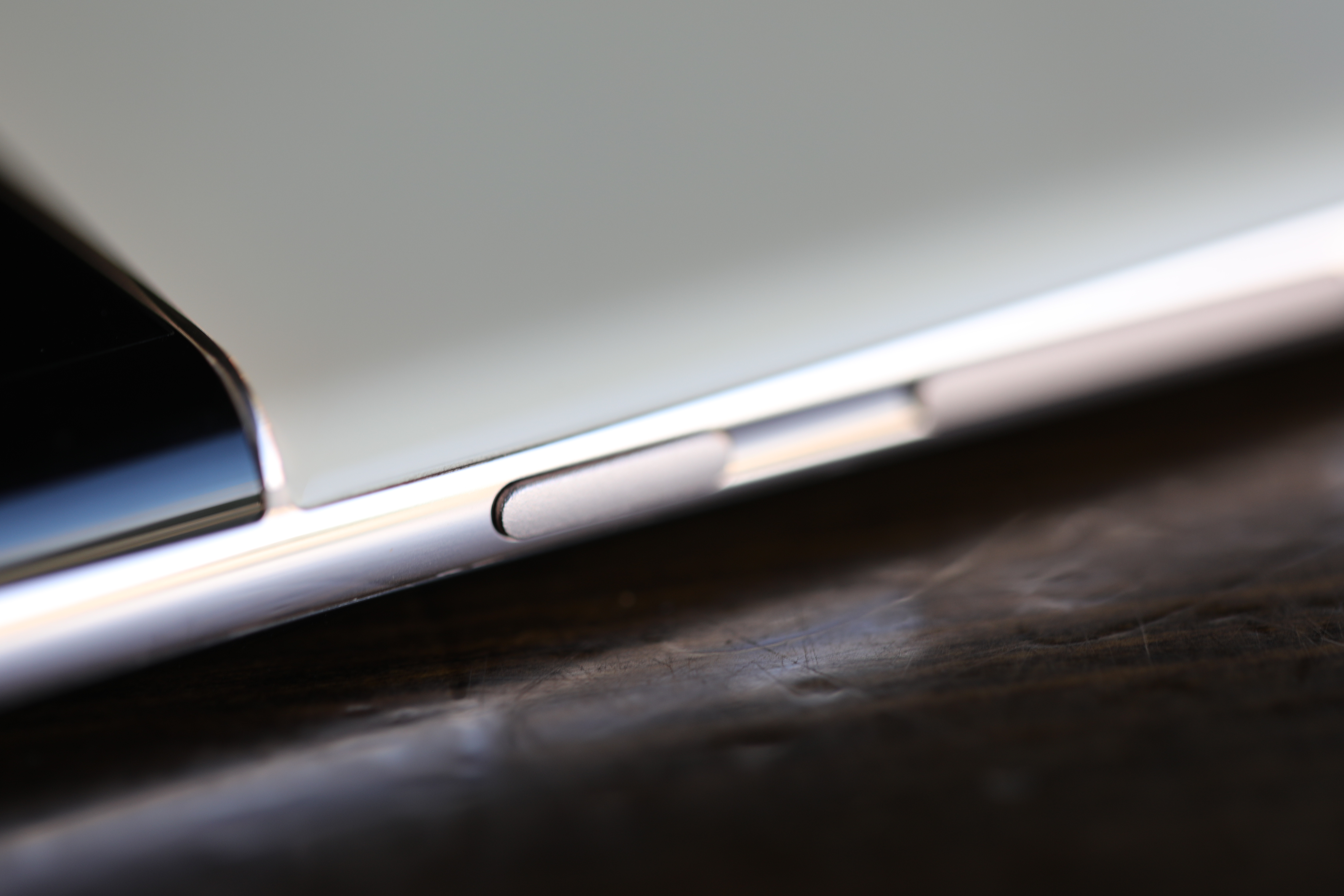 The company has addressed some of the battery issues that plagued earlier models. The 6 and 6 Pro feature 4,614 and 5,003mAh batteries, respectively — that’s a nice jump from the Pixel 5’s 4,080mAh (which, in turn, was a nice jump from the Pixel 4). Google says that should translate to around 24 hours of life, or nearly double that if you go into Extreme Battery Saver mode. On-board fast charging via the 30W USB-C plug (sold separately) should give you half a charge in half-an-hour. Both systems also support wireless charging via Qi. 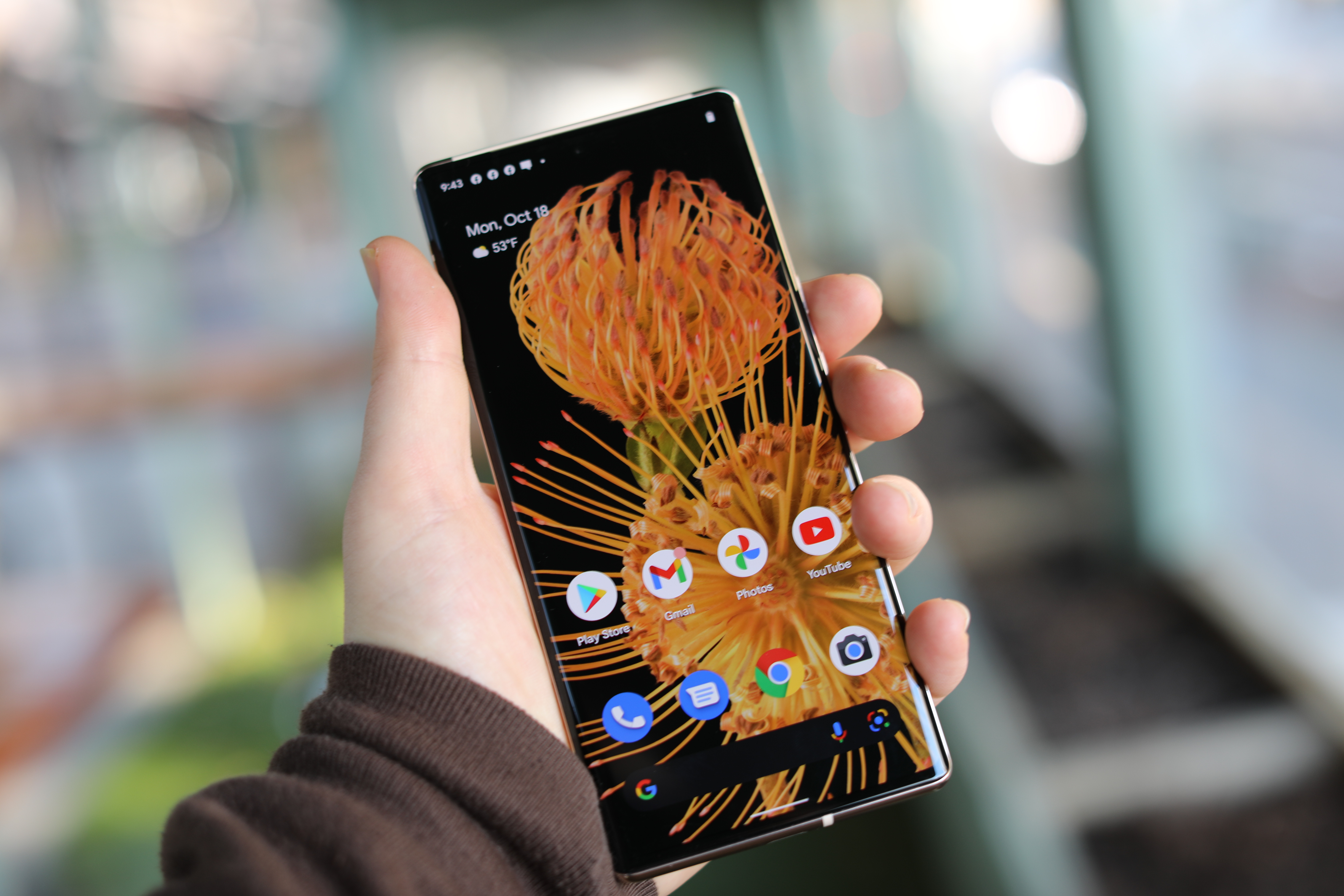